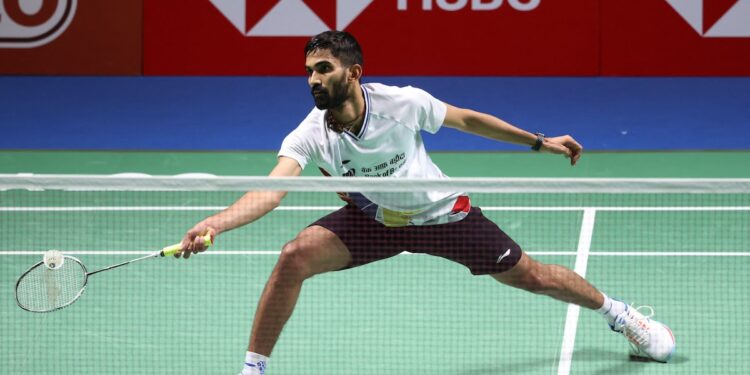 The silver medal from the BWF World Championships is the culmination of years of hard work, Indian Kidambi Srikanth said after failing to take the top prize in Huelva on Sunday. Even before his 15-21 20-22 loss to Singapore’s Loh Kean Yew in the men’s singles final, the 28-year-old’s silver medal made him the first Indian man ever to achieve this feat at the major tournament. “In some tournaments I played really well and in some tournaments I couldn’t play well this year, but again reaching the final of a world championship is something I worked really hard for, and I’m very happy that I am here today,” said Srikanth.

“I’ll try to keep working hard, it’s a process and there’s a lot of other tournaments next year, like the Commonwealth Games, Asian Games, the world championship, so it’s a really big year, next year. So I’ll try to stay positive.” Srikanth, currently 14th in the world rankings, had his moments but wasted a 9-3 and 18-16 lead in the two games to see the coveted title slip from his grasp.

“It was a great week. Even today I had my chances in both games. I had a healthy lead in the first game and even in the second game I had 18-16 tie. I couldn’t finish the game today Loh really played good,” he said.

“A lot of things can be learned from this, so I will definitely work on this and try to get better for the next tournaments.” Talking about his mentality ahead of the final, Srikanth said: “When I went into this match I really wanted to be positive and not make mistakes. But sometimes it happens: you have to win, you have to lose.

“I tried to stay in the game, it worked a little bit in the second game, but it’s important to finish the game, but yeah, it’s something I’ll have to work on.” Srikanth had beaten Loh the only time he met him three years ago, at the 2018 Commonwealth Games mixed team event.

“The last time I played against him was four (three) years ago, which is quite a long time. He’s improved his game, he’s matured as a player, his physical strength has improved and he’s playing exceptionally well.” he said.

Srikanth had faced many difficulties in obtaining his visa to enter Spain and the Indian said he was not sure if he would be able to participate in the event.

“I didn’t know if I would be able to come here until Thursday. I heard Thursday night, I think around 6 pm that I got my visa, so I wasn’t sure I could come here.

“So yeah, I’m just happy to come here and play another tournament. It’s been a great week for me. I’ve been able to play well all week. I would have loved to have won today.” Malaysian born Loh was in disbelief after becoming the first player from his country to win a world championship title.

“I can’t believe it. I mean, at the beginning of the year I didn’t think it would happen. Now I can tell you I’m finally happy, I don’t have to focus on tomorrow’s game,” said the world number 22.

Loh shared his game plan for the final, saying: “He (Srikanth) is such a good attacking player, I knew it wouldn’t be easy to defend his shots. So I had to be prepared for his defense and not let him down much to attack.

“It didn’t work well at the beginning and I had to pick up the pace and take the initiative up front.” “It wasn’t easy to find the balance between patience and being aggressive. I wanted to win, but it wasn’t easy to keep calm, but in the end I got it right and it worked out well.” “I know I’m not an underdog anymore. I have to think about how to manage things. I can only do that by playing matches, winning or losing. I can only learn from it. So I hope I can handle the pressure can withstand.”