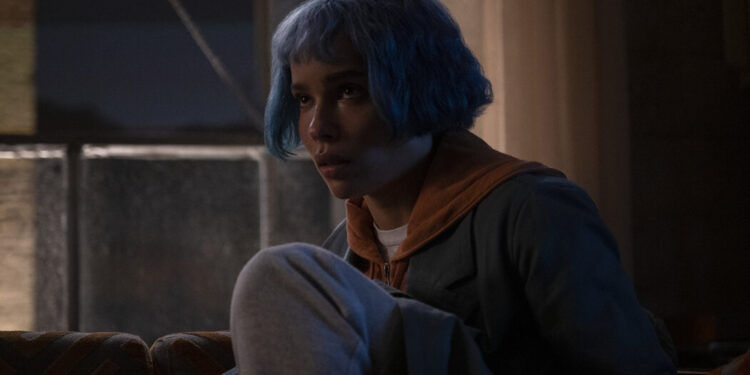 Soderbergh quickly maps the coordinates of Angela’s life, in seamless synchronization with Kravitz’s precise, precisely controlled execution and David Koepp’s clever, streamlined script. After an enigmatic prelude, the setting shifts to Angela’s loft, a space that is simultaneously comfortably intimate and spacious enough that you can’t see all the dark corners at once. Still, Angela seems at ease and in control, even if the trademark camera work—which isn’t always pinned to her point of view—suggests forces beyond her control. Like KIMI, the floating, drifty (pushy, curious) camera seems to have a mind of its own.

Angela’s job is to fix communication errors in KIMI. She listens to recordings of the software’s failed interactions with users and corrects the glitches, an otherwise dull, routine performance that is turned upside down when she thinks she hears a violent crime on one recording. She’s horrified, but since Angela is more complex than she first appears, she gets busy. She hunts for clues, invokes favors. And she seeks help from a committed relationship (Byron Bowers), an unruly Romanian co-worker (Alex Dobrenko), and a supervisor (a perfect, perfectly repulsive Rita Wilson). Things get weird, and then they get scary.

If you think you’ve seen this movie, you have and you haven’t. “KIMI” confidently draws from an assortment of cinematic references, including obvious touchstones like “Rear Window” and thrillers for women in danger like “Midnight Lace.” Koepp wrote one of the best contemporary versions of the domestic mousetrap subgenre, “Panic Room”, which was directed by Soderbergh’s friend David Fincher. A photo of dropped glasses here reads like a hat for a similar image in Fincher’s movie, who in turn nods to Sam Peckinpah’s “Straw Dogs,” a much less female-friendly problem-at-home movie.

As Angela digs into the mystery of the recording, “KIMI” begins to shift into a more haunted register. In time, she is forced to leave her apartment, an exit that frees and frightens her, as well as frees Soderbergh. (He shot and edited the film.) Once she’s past her front door, her physicality changes abruptly, as does the visual style of the film. She shrugs, bows her head and hugs the walls, and the camera work becomes emphatically expressionistic as Soderbergh pulls all his tricks, clearly a stunner. The camera shoots and races, and it takes long shots and tilted angles, isolating Angela in the frame as she storms into a paranoid thriller à la “Blow-Up” and “The Conversation”.