Kyle MacLachlan opened the Prada Show, but don’t get too excited 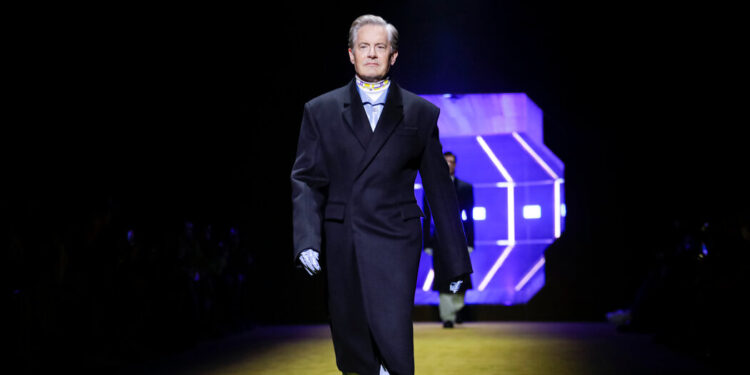 When actor Kyle MacLachlan opened the Prada menswear show in Milan on Sunday, many were surprised and delighted to see Special Agent Dale Cooper shine on the catwalk. But others wondered if Mr. MacLachlan was indeed returning to fashion.

In 1992, he was part of a campaign for Barneys New York, along with former supermodel Linda Evangelista, shot by Steven Meisel. He and Ms. Evangelista (who were a couple in real life) also did a shoot for DKNY, and Mr. MacLachlan was featured frequently in fashion magazines, including GQ and Esquire.

However, Mr MacLachlan, 62, is fairly new to the runway; the only other time he ran one was for the annual Dressed to Kilt charity show in 2010. “My basic thought was just not tripping and trying not to fall,” he said in a phone interview. “You realize in that moment, it’s really not about me. It’s about serving the designer.”

Prada’s invitation, now designed by Miuccia Prada and Raf Simons, came a few months ago and surprised Mr. MacLachlan, but he couldn’t turn it down.

“I have a lot of respect for the Prada brand and was curious to see what Raf had contributed,” he said. “You’re around creative, like-minded people, and it just recharges your batteries.”

After making it through the show without falling, Mr. MacLachlan considered the moment a success. “During rehearsal the first day I was walking, and Raf came up and said ‘a little faster’,” he said. “That was the only direction I got, and I was like, ‘Okay, walk with a purpose. Get to the end. Try to stay in a straight line.’”

For the “Twin Peaks” and “Blue Velvet” star, modeling has some overlap with acting. “I enjoy working with a photographer and creating an image or a series of images,” said Mr. MacLachlan. “It’s not that different from creating a character for film or television.” He added that he appreciates “creating a mood, or a moment or a feeling, just in an image.”

MacLachlan first met some of the younger actors on the show, including Asa Butterfield and Louis Partridge. “You go to a different place in a different state and you wear different clothes, and you mostly share these moments with the other actors who were there,” he said.

Though he described his own style as “keeping things pretty simple,” “classic,” or “understated,” he loved what he wore to the runway. “It was fun, it was erratic,” he said. “I was wearing a nice long cashmere jacket.” The light blue gloves he wore had an “astronaut feel to it”.

MacLachlan said it might be his first and last time on the high-fashion runway. “Raf is quite special, and we’ve known each other for a while, and we really have mutual respect for each other,” he said. “My cup is full for now.”