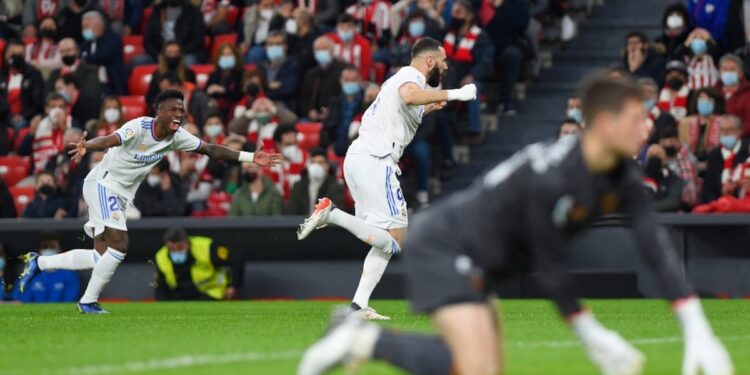 Karim Benzema was in fantastic form, taking a brace on Thursday in a 2-1 win against Athletic Bilbao in La Liga. In what was Spain’s final game of 2021, Benzema turned it into an unforgettable moment with a magical fourth-minute goal. Aside from the strike, the fans were also amazed at the run-up to the goal. It all started with Vinicius Jr on the left wing, who passed the ball to Toni Kroos on the edge of the opponent’s penalty area. Kroos simply put it down for Benzema, who was standing in the left part of the box. The skipper curled up in a first-touch shot, reminiscent of Luis Suarez from the 2010 FIFA World Cup. The ball flew like an arrow and passed an unlucky Julen Agirrezabala.

Benzema completed his brace in the seventh minute. Despite a goal from Oihan Sancet in the tenth minute, Benzema’s brace was enough to win Real Madrid.

Bernabeu’s side currently top the La Liga table with 46 points from 19 games. They won 14 games, lost once and drew four times. They are followed by Sevilla in second place, Real Betis in third and Rayo Vallecano in fourth.

Arch-rival Barcelona is far below in seventh position with 28 points from 18 games.

Benzema hopes to build on his good form next year and take Real Madrid to the league title.

Benzema also leads the race to win the prestigious Pichichi Trophy with 15 goals from 18 games and has also racked up seven assists.