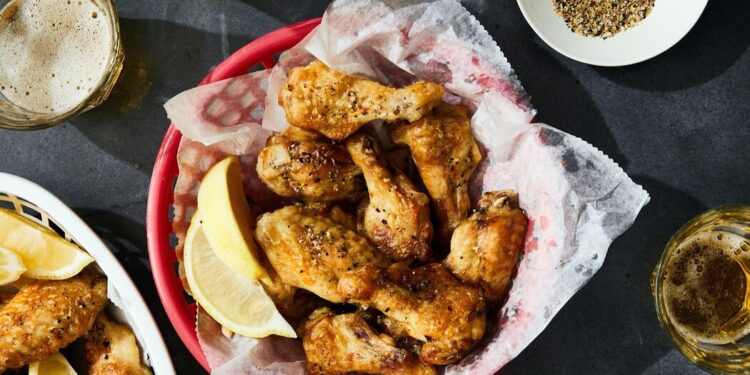 But I spent much of my childhood driving 141 and Buford Highway with my parents, past clubs with big neon signs without thinking twice. One had a sign that said “Girls Girls Girls,” and it was in the same shopping plaza as the Korean restaurant where we got our warm wings on Sundays after church. (My big brother, Kevin, remembers complaining to my mother, “How come only girls go there?”) Another, on Peachtree Industrial Boulevard, was Oasis Goodtime Emporium; there is a palm tree sticking out of the A on the sign overlooking the highway. In high school, I sang at an open-mic night across the street from a pink-roofed palace called Pink Pony. Now that I’m driving these highways as an adult, I can connect the dots between the food I knew then and the context I know now. It’s a satisfying sensation, like filling out a coloring book after years of just drawing the outlines.

Lemon pepper, canonically, is not just lemon and pepper. Commercial blends, which most restaurants use, are sweet with sugar, tart with citric acid, and savory with powdered onion or garlic (or both). But the joy of making your own blend at home is that you can customize it to your liking, and the smell alone is worth it. Magic happens when you rub lemon zest and black pepper with your fingers: the lemon takes on the musky taste of the pepper and the pepper takes on the fragrant balm of the citrus.

Just as there are many interpretations of lemon pepper seasoning, there are also many interpretations of lemon pepper wings. At JR Crickets, the most popular order, “lemon pepper wet,” refers to a Buffalo-style wing sauce sprinkled with lemon-pepper seasoning, which tempers the heat. (This is the famous chicken wing order referenced in the 2016 TV show “Atlanta”.) When I picked up my 10-piece on a Sunday at the Briarcliff Road location, locals had gathered around the many television sets, watching the Falcons game. At American Deli, the same order is more lemony, with a glistening sauce that is both buttery and tart. It doesn’t hurt that these wings glow gold from a little turmeric.

You don’t have to limit lemon pepper to wings. Rubbed on salmon steaks or sprinkled with thinly sliced ​​bulgogi beef before it reaches the grill, lemon pepper is a secret weapon. It also tastes good on pizza. Matthew Foster was on his way in entertainment production before the pandemic brought him back home to Atlanta where he was born and raised. He started Phew’s Pies while in quarantine and got noticed on Twitter for his first creation, a lemon-​pepper wet pizza: A pie with lemon-​pepper sauce and chunks of chicken drumettes on top of the cheese, with two air-fried lemon​ pepper flats, or wingettes, in the center. This concoction came to his mind as he was “thinking about my culture, the African-American culture,” he said, asking himself questions like, “What would we like to see on pizza?” And how would we do pizza? How would the South eat pizza?” Foster calls his pies “metropolitan” – Neapolitan in their roots, but influenced by the culture and flavors of Atlanta. “I’ve been eating lemon pepper since I was a kid,” he said. “It’s a comfort thing and reminds me of home.”

It’s no wonder Magic City Kitchen’s tagline for its food is “The reason you’re here.” In Atlanta, lemon pepper is the queen. And whether you go there for the wings or for the show, there’s a chance you’ll run into Lou Williams, Clippers’ guard. He has since been drafted by the Atlanta Hawks.