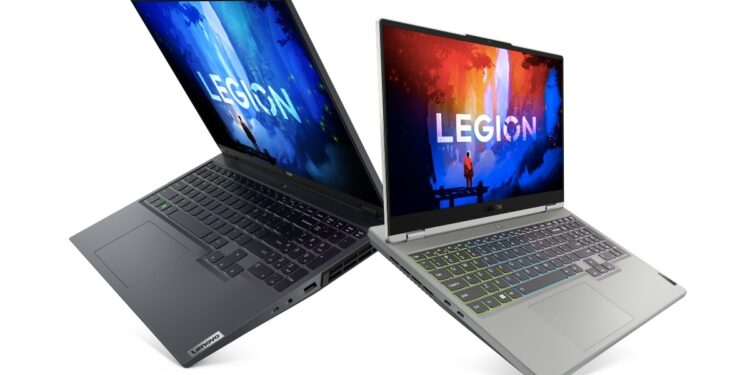 Lenovo expanded its Legion line of gaming laptops at CES 2022 on Wednesday. The new range includes the Lenovo Legion 5i Pro (2022), Legion 5 Pro (2022), Legion 5i (2022), and Legion 5 (2022) all of which come with next-generation AMD Ryzen and 12th-generation Intel Core processor options, and running on Windows 11. In addition to the new Legion gaming laptops, Lenovo unveiled the Legion Y25-30 Monitor, as well as G27qe-20 and G24qe-20 monitors for gamers. The PC maker also launched the Lenovo Legion M600s wireless and M300s RGB mice to complement the new gaming devices.

Details on the price and availability of the latest Lenovo gaming devices in India are yet to be revealed.

As for the distinction, the Lenovo Legion 5i Pro (2022) comes with a 12th generation Intel Core i7-12700H processor. The Legion 5 Pro (2022), on the other hand, is equipped with the next generation of AMD Ryzen processors.

The gaming laptops come with 4800MHz DDR5 RAM and up to 1TB PCIe SSD storage. They also include Wi-Fi 6E, with improved antenna placement, and an 80Wh battery, along with support for Super Rapid Charge, which is claimed to deliver zero to 80 percent battery life in a 30-minute charge.

Lenovo has equipped Legion 5i Pro (2022) and Legion 5 Pro (2022) with Nvidia GeForce RTX 30 series GPUs. The laptops deliver a maximum total graphics power of 165W. It is also claimed that users will have the option to squeeze in up to 15W more graphics power over the latest generation models.

The Legion 5 Pro (2022) series comes with an updated fan system available in addition to a large exhaust area and an improved penta heatpipe layout for better thermal management. The fan blades on the new machines would also be up to 40 percent slimmer over the previous generation to keep the system quieter, the company said.

As for multimedia support, the new Legion 5 Pro series has a two 2W stereo speaker system coupled with Nahimic’s simple surround sound feature to provide a spatial audio experience when connected to a Bluetooth speaker. There is also a dedicated e-shutter button for the webcam.

The Legion 5i Pro (2022) and Legion 5 Pro (2022) both come in a chassis made from a mix of aluminum and magnesium. The laptops come with a TrueStrike keyboard with a 4-zone backlight effect system called Legion Spectrum RGB Lighting. Gamers can choose between the optional blue backlight or try rainbow colors with 17 custom color profiles. In addition, the laptops will be available in metallic Storm Gray and pearl Glacier White colors.

Under the hood, the Lenovo Legion 5i (2022) has a 12th-generation Intel Core i7-12700H processor. The Lenovo Legion 5 (2022), on the other hand, comes with the next generation of AMD Ryzen processors. Both laptops are paired with Nvidia GeForce RTX 30 series GPU and up to 32GB of DDR5 RAM. You also get up to 1TB of PCIe SSD storage.

Lenovo has shipped four-zone RGB and white backlight options with the new Legion 5 series, so gamers can decide what type of keyboard backlight they want. The laptops also have the Legion TrueStrike keyboard that comes with interchangeable WASD keys for a personalized look.

In terms of thermal management, the new Legion 5i and Legion 5 both have an up to 40 percent more powerful fan with a large exhaust fin area that is said to be 45 percent larger than the previous generation.

Like the new Legion 5 Pro series, Lenovo Legion 5i (2022) and Legion 5 (2022) both come with two 2W stereo speakers paired with Nahimic 3D Audio. The laptops also have Wi-Fi 6E and fast charging via USB Type-C.

Both new Legion laptops are available in Cloud Gray and Storm Gray colors.

In addition to the Legion Y25-30, Lenovo introduced Lenovo G27qe-20 and Lenovo G24qe-20 entry-level gaming monitors. Both are designed for casual gamers and have a 1ms MPRT. The monitors also come with a refresh rate of up to 100 Hz and a refresh rate of up to 110 Hz overclocking. In addition, the new Lenovo G Series monitors have an adjustable stand so you can tilt and adjust your view. Users can also adjust the color output of the screen using the Lenovo Artery graphical interface.

In addition to the new monitors, Lenovo has released the M600s Wireless Gaming Mouse that weighs less than 75 grams and has an ergonomic design for gamers. It can be used wirelessly for a lossless sub 1ms over a 2.4GHz connection via Bluetooth and a wired USB Type-C cable. The mouse also has lighting effects in 16.8 million colors.

The Lenovo M600s mouse has an optical sensor, Pixart 3370, which offers a precision of 19,000 dots per inch. The mouse is also claimed to provide up to 70 hours of battery life on a single charge and can be charged quickly in 90 minutes. It comes with an optical microswitch construction that lasts 80 million clicks.

Lenovo has also introduced Legion M300s RGB Gaming Mouse in the portfolio that weighs 61 grams. It has an 8,000 DPI and a maximum movement speed of 220 inches per second. The mouse has microswitch buttons that last up to 10 million clicks, the company said. There is also an ultra-soft cable for connectivity.

Apart from the new hardware, Lenovo launched the Legion Arena as its gaming platform that will be available with links to popular platforms and online stores to help gamers find their favorite PC games under one roof with ease. The company has also introduced the Lenovo carbon offset service, which would allow gamers to compensate for their carbon emissions. The opt-in service allows you to purchase carbon offset credits based on your device’s calculated emissions over its average life cycle, and Lenovo’s carbon offset partner contributes them to one of several United Nations climate action projects, the company said. .