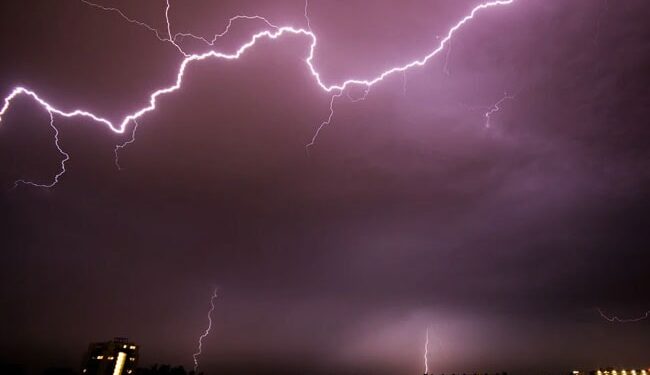 A lightning flash that stretched nearly 475 miles (769 kilometers) across three US states in 2020, or equivalent to the distance between London and the German city of Hamburg, has been named the longest recorded single flash by the World Meteorological Organization (WMO).

The record lightning struck Mississippi, Louisiana and Texas in the southern US on April 29, 2020, measuring exactly 768 km or 477.2 miles, experts at the UN’s intergovernmental agency said Tuesday.

This corresponds to the distance between New York City and Columbus Ohio in the United States or between London and the German city of Hamburg, the WMO said in a press release.

The greatest duration for a single lightning flash of 17.102 ± 0.002 seconds from the flash that developed continuously from a thunderstorm over Uruguay and northern Argentina on June 18, 2020, it said.

Both the previous and new record used the same maximum great circle distance method to measure the magnitude of the flash.

The longest duration megaflash had a previous duration of 16.73 seconds, which was derived from a flash that developed continuously over northern Argentina on March 4, 2019, 0.37 seconds shorter than the new record.

The findings are published in the Bulletin of the American Meteorological Society, the WMO said.

“These are extraordinary records of single lightning flashes. Environmental extremes are living measurements of the power of nature, as are scientific advances in being able to make such assessments. It is likely that even greater extremes exist, and we will be in able to observe them as lightning detection technology improves,” said Professor Randall Cerveny, Weather and Climate Extremes rapporteur for WMO.

The new record strikes took place in thunderstorm hotspots of the Mesoscale Convective System (MCS), whose dynamics allow for extraordinary mega flashes — namely, the Great Plains in North America and the La Plata Basin in South America. Renowned lightning specialist and committee member Ron Holle noted, “These extremely large and long-lasting lightning strikes were not isolated, but occurred during active thunderstorms. Anytime thunder is heard, it’s time to get to a lightning-safe place.” The only lightning-proof locations are large buildings with wiring and plumbing; no constructions like at a beach or bus stop. The second reliably safe location is in a fully enclosed, metal-roofed vehicle; no dune buggies or motorbikes.

If the lightning is within 10 km as found with reliable lightning data, proceed to the lightning-proof building or vehicle. As these extreme cases show, lightning can arrive over a long distance in seconds, but they are embedded in larger thunderstorms, so pay attention.” The WMO Archive of Weather and Climate Extremes maintains official records of the world, hemispheric and regional extreme records associated with some specific weather types.

The previous assessments that determined flash duration and magnitude used data collected by ground-based Lightning Mapping Array (LMA) networks. Many lightning scientists recognized that there are upper limits to the magnitude of lightning that can be observed by an existing LMA. Identifying mega flashes outside these extremes would require lightning map technology with a larger observational domain.

“Lightning is a surprisingly elusive and complex natural phenomenon due to the impact it has on our daily lives. We are now in a place where we can measure its many facets excellently, discovering surprising new aspects of its behavior. Now that we having a robust record of these monster flashes, we can begin to understand how they occur and appreciate the disproportionate impact they have,” said lead author and evaluation committee member Michael J. Peterson, of the Space and Remote Sensing Group (ISR). -2) from Los Alamos National Laboratory, USA.

There is still much we do not know about these monsters, but as an early career scientist it is a privilege to be among my colleagues at the forefront of this new and exciting field of research and to push the boundaries of our understanding of what lightning is for. capable,” said Peterson.