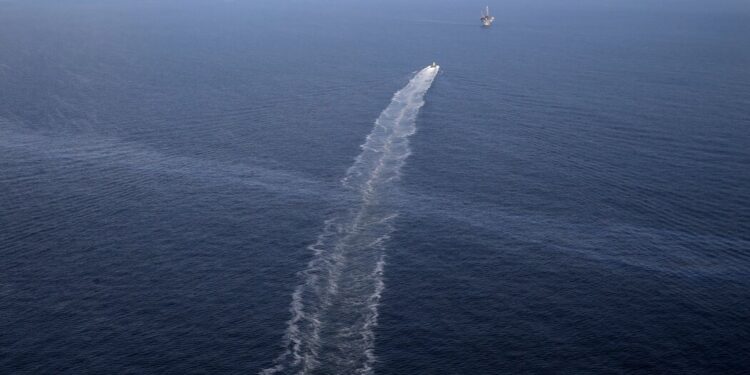 WASHINGTON — The Justice Department announced Wednesday that Louisiana-based Taylor Energy will pay $43 million in civil fines and damages for an oil spill in the Gulf of Mexico, the longest-running spill in U.S. history since 2004. .

As part of the settlement, Taylor Energy will also transfer control of $432 million to the Department of the Interior in a trust fund intended to clean up the spill.

The leak, about 10 miles off the coast of Louisiana, started 17 years ago when a Taylor Energy offshore oil rig sank in a mudslide caused by Hurricane Ivan, opening a number of undersea wells. Since then, oil and gas have seeped from the site.

Taylor Energy, which sold its oil assets and halted production in 2008, has long disputed both the magnitude of the leak and the extent of its responsibility for the cleanup efforts. The settlement on Wednesday marked the end of a years-long legal battle over the spill. The $43 million that the company will pay represented all of its remaining available assets, the Justice Department said.

“Offshore operators cannot allow oil to enter our country’s waters,” Todd Kim, the assistant attorney general in the Department of Justice’s Environment and Natural Resources Division, said in a statement. “If an oil spill occurs, the responsible party should work with the government to address the problem in a timely manner and pay for the cleanup. Holding offshore operators accountable is vital to protect our environment and ensure a level playing field for the industry.”

Taylor Energy had set up a $666 million fund in 2008 to clean up the spill and spent about a third of the money capping nine of the 25 wells damaged during the hurricane. But after doing so, the company said the remaining 16 wells were too risky to tackle because they were buried under so much mud and debris, and unsuccessfully sued the Interior Ministry to release the balance of its funds. .

In 2018, after new federal estimates suggested as much as 29,000 gallons of oil a day was still flowing from the site, the Coast Guard ordered Taylor Energy to stop the leak or face hefty fines. When the company declined, the Coast Guard commissioned a third-party contractor to build a containment system that is now believed to capture most of the oil spill, and sent Taylor Energy a $43 million bill last year to pay the disposal costs of one year to cover.

Taylor Energy pushed back. The company claimed that only a small amount of oil had leaked from the wells, that the oil spills observed in the area came from oil-soaked sediment around the platform rather than from the wells themselves, and that if further disturbed of the area was at risk of spilling even more oil into the Gulf of Mexico. Taylor Energy had also challenged the Coast Guard’s containment efforts in federal court, claiming the company should not be held liable for the costs.

The settlement requires Taylor Energy to dismiss the three pending lawsuits against the federal government. After the settlement is approved by the court, the company will be liquidated and the remaining assets will be transferred to the federal government. The company has also been instructed not to interfere with Coast Guard efforts to contain or remove oil from the spill site.

Taylor Energy did not immediately respond to a request for comment.