Love is not a zero sum game 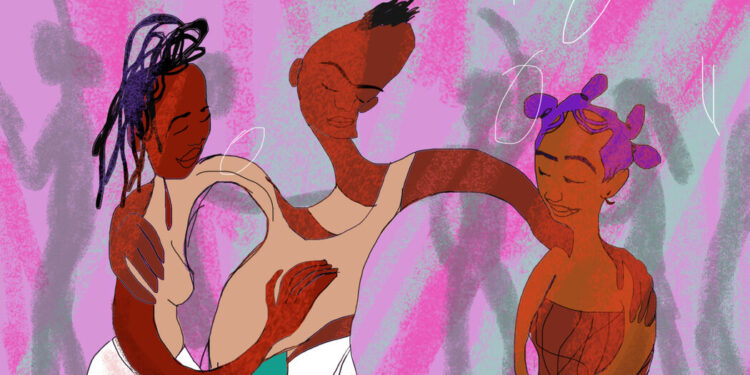 I have always been wary of sports, competition and falling in love. So growing up, I avoided all three of them. As a child I would shrug if I ‘accidentally’ let opponent goals into the net. I slowly followed everyone else on the basketball court as they ran from one end to the other. My mom eventually stopped asking if I was interested in signing up for extracurricular activities, and my friends began to understand my lack of interest in playing board games, card games, drinking games, or anything else I was competing for the title for. winner†

I was even able to avoid responding to romantic feelings for a long time, but with age I kind of gave up. After being an indecisive soccer player, a seedy basketball player, and a bouncer who was just as bad at kissing as he was at work, I decided I’d made a mistake in opening up and convincing myself that vulnerability was the real problem. I wouldn’t make any more emotional investments with my sexual partners. I never bothered to be competitive or fall in love because I didn’t care about winning.

I met him on HER, a dating app for queer women and gender diverse people. He had long brown dreadlocks with subtle hints of blond and a promising smile. There was something about him that told me he would be just the kind of fun I was looking for. He approached me with a smooth pick-up line and I replied with something much less cool. Before I could think much about it, he told me that he had been assigned a woman at birth and that he had passed on to live his life in the gender that was most authentic to him. “So what are you looking for?” I said. “Well, I’m in an open relationship. So I don’t expect anything too serious,” he replied, adding that he and his partner were engaged to be married.

My friends wanted to know how one can commit to a partner while pursuing other relationships. I didn’t blame them: The idea of ​​a relationship where both partners agree to see other people while they’re together isn’t something most people learn about in the “birds and the bees” conversation. My immediate reaction when I learned that he was in an open relationship was relief. I would have fun without emotional responsibility. They were deeply in love and had a strong foundation on which their love was built. They knew that marriage was the ultimate goal of their relationship and had both legal and personal benefits, but they also knew that their marriage had to be unconventional to meet both their physical and emotional needs, which in this case meant leaving the door open for other intimate opportunities.

What neither of us expected was the rapid progression of our feelings. I started to wonder more when he would see his fiancée next. He wanted details about the dates I had. We both became possessive as our unexpected love blossomed. We started to feel entitled to each other. But as my insecurities became more apparent, he managed to maintain his casual demeanor for the most part. And of course he could. He always went home in his partner’s loving arms, and I always went home with thoughts of a lover I couldn’t quite call mine.

We were everything I swore I’d never be: very vulnerable and very corny. “You hang up first,” he would say. “No you!” I’d say my naturally deep voice suddenly sounds prepubescent. We were inseparable. We dipped into wet kisses at the Toronto Transit Commission like no one was around and fed each other street meat on the corner of Church and Wellesley. Here I was, never intrigued by competition, but suddenly taking on the challenge of convincing him that I was worthy of being his only one.

I tried to appear unfazed by the uncertainty of our relationship, but every day I felt my casual facade peel away. I knew it wouldn’t be long before I had nothing to hide behind.

One evening we went out for a night out with our mutual friends. I was hopeful that the loud music and the many shots of tequila would drown out the unanswered questions of our relationship. The dim club lights and the booze enhanced the moment, and when he and our friend started dancing with each other, I felt justified in my anger. Seeing them dance—two Caribbeans sharing a strictly platonic love language of slow nagging and good drinks—reinforced everything that threatened our life together as a couple: my fear of losing him and being unable to do anything about it.

It was then that I knew we couldn’t go back to our no-strings-attached deal. I wanted to take away the love he kept for his fiancée and keep it to myself (which is exactly the antithesis of an open relationship). Here was this person sent to me through a dating app that hosts mostly nude photos. Here I somehow met someone whose presence calmed me, and he had chosen to devote himself to someone else. Someone who knew the smell of his collar and the softness of his lips long before I even knew he existed.

None of that felt fair. I spent that night preparing the curtain call of our love story. And although we continued dating for weeks after that, that moment marked a marked shift in our relationship. An obvious flag that this “casual thing” had gone too far.

Our relationship inevitably came to an end; I needed more and he knew he couldn’t give it to me. When I thought about us, I realized that I was not competing with anyone but myself. I assumed that “winning” in this situation meant abandoning the concept of non-monogamy altogether and walking hand in hand into the sunset. Just us two.

But the open relationship wasn’t the problem.

The normalization of heterosexuality has been so insidious in my life through the consumption of media, education, and social assumptions and attitudes, that even as a queer woman in love with a trans man, I still questioned the validity of our non-monogamy. I had to learn to muffle the sound of heteronormativity; the idea that infatuation can only look one way to be valid. That intimacy can only include two people. That there must be competition to get the love we deserve.

Black people have clouded the dynamics of the family for as long as we’ve existed in this world. We’ve had stepparents who loved us like they made us from scratch. We’ve promoted every friendship that has lasted more than five years to that’s my cousin status. I have half siblings that I have only referred to as whole. The words “half brother” were treated as if they were illegal in my household; my parents constantly reminded us that the small and scientific details of our family were not important. When my sister’s mother died and my aunt raised her, she called her aunt-mom. We have never questioned that. It never needed explanation.

There’s never been anything nuclear about any black family dynamic I’ve ever known, so why did I go rogue and compete – in my own mind – with a black woman who loved herself, and her fiancé enough to encourage him to love him to share with me? Perhaps all along I was never afraid of competition or loss, but instead, as a black woman, I couldn’t fathom the idea that, contrary to popular belief, love doesn’t actually require competition. Anyone can feel worthy.

It was because of the open relationship with my betrothed lover that I was able to say yes to a date with the next person I would fall deeply in love with. Our non-monogamous ways gave me the freedom to openly explore other relationships. He later married his fiancée and we managed to remain friends.

In choosing to make the transition from romantic to platonic a smooth one, we raised a subliminal middle finger to a world where relationships between black women—especially when there’s a man in the middle—are so often reduced to the idea that there is only but enough is love for one of us.

Open relationships are far from a means of competition, they are an embodiment of love that cannot be limited. They have the ability to bring together a clumsy small-town black girl and a cool island boy with effortless swagger, and somehow make them coexist in the summer heat of Toronto, making their romance more filled. with love it becomes that they have found each other.