Medicare proposes to reimburse Aduhelm only for patients in clinical trials 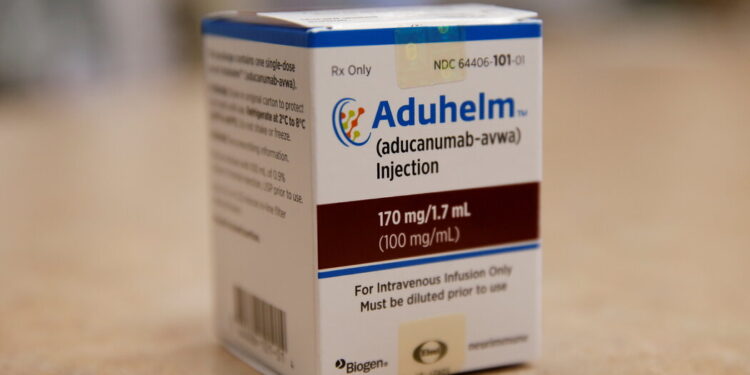 Aduhelm was approved by the Food and Drug Administration in June in a decision that was heavily criticized by many doctors and Alzheimer’s experts because the results of clinical trials showed it poses significant safety risks and unclear benefits for patients.

Congress is investigating whether the FDA worked too closely with Biogen and why Aduhelm was approved despite strong objections from some senior FDA officials and the agency’s independent advisory committee.

So far, only a small number of patients — a fraction of the number Biogen and industry analysts initially expected — have used Aduhelm, a monoclonal antibody that’s given as a monthly infusion. Many major US health care systems have refused to offer the drug, citing questions about its benefits and risks.

Medicare officials are believed to determine coverage based on whether a drug is a “reasonable and necessary” treatment, a phrase that usually means “sufficient evidence of improved health outcomes,” said Dr. Sean Tunis, a former CMS official who is now a senior fellow at the Center for the Evaluation of Value and Risk in Health at Tufts Medical Center.

Medicare’s decision on Aduhelm will also set standards for the evaluation of several similar Alzheimer’s drugs in the pipeline.

The FDA itself acknowledged in its approval of Aduhelm that there was insufficient evidence that it would help patients. Instead, it gave the go-ahead for the drug — the first new treatment for Alzheimer’s disease in 18 years — under a program called “accelerated approval,” which allows authorization of unproven drugs for serious diseases with few treatment options. if the drug affects a biological mechanism in a considered way “reasonably likely to predict clinical benefit.”

The FDA said it based the accelerated approval on Aduhelm’s reduction of a protein called amyloid, which clumps together to form plaques in the brains of people with Alzheimer’s disease. But many Alzheimer’s specialists say extensive research has turned up little evidence that reducing amyloid slows cognitive decline. The FDA also required Biogen to conduct another clinical trial to determine if the drug provided any evidence of benefit. In the years needed to complete that study, Aduhelm will be available to patients.