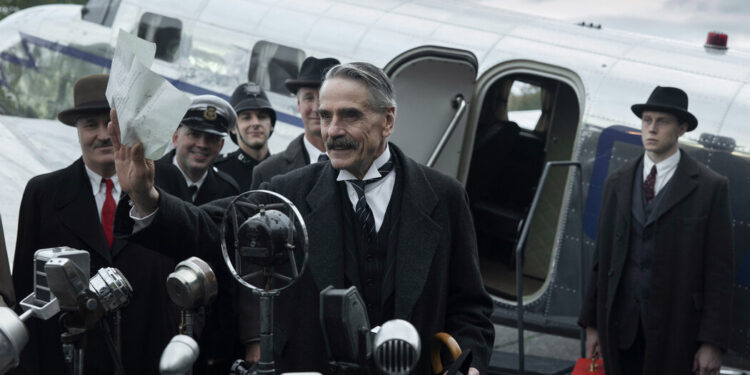 Shortly after “Munich: The Edge of War” opens, a young couple has an anniversary lunch at a restaurant. It is 1938 and the husband, who works in the British Foreign Service, tells his wife that Hitler is threatening to invade Czechoslovakia, and if that happens Britain and France will be obliged to respond militarily. Just as the man brings this sober news, the woman – with an indulgent smile and the openly bored look of someone listening to the weather report – gets up. The waiter brought their Chablis? And last but not least.

Unlike that woman, at least Hitler gets some grudging respect and some decent dialogue in this cauldron about the diplomatic efforts to stop Germany. Based on the bestseller by British novelist Robert Harris, the film blends fact with fiction for a story about estranged friends, Hugh (George MacKay) and Paul (Jannis Niewöhner), on the other side of the geopolitical divide. Hugh works at 10 Downing Street and is married to the aforementioned cliché, Pamela (Jessica Brown Findley). Paul serves in the Ministry of Foreign Affairs in Berlin and has a sharp, politically astute lover, Helen (Sandra Hüller).

For the most part, this film comes across as a lengthy attempt to glorify Neville Chamberlain, the British Prime Minister who engaged in the much-discussed diplomatic strategy of appeasement in the run-up to World War II. Played by an unfortunately limp Jeremy Irons in funeral mode, the Chamberlain here is a quietly heroic figure who mindfully negotiates with Hitler to prevent another war. But while Chamberlain is the champion of the story—a noble defender, historical point of contention, and revisionist argument rolled into one phlegmatic figure—the film’s more energetic and visually captivating heroic tasks are delegated to Hugh, Paul, and the supporting actors in their jobs.

The film opens with a glimpse of the good old days in Oxford when Hugh and Paul were in love with the same Jewish free spirit, Lena (Liv Lisa Fries). Years later, Hugh finds himself in a submissive officer on Downing Street, hovering intently above Chamberlain (“well navigated, sir”) while Paul busily plots to take out Hitler (an arachnid and strange Ulrich Matthes). For much of what follows, Hugh and Paul occupy their respective narrative areas. As the plot thickens, the filmmakers — the film is written by Ben Power and directed by Christian Schwochow — attempt to build suspense by going back and forth between the two lines of action that eventually converge predictably.

All this busy editing doesn’t help enliven ‘The Edge of War’, a grueling bureaucratic procedure in which many, many characters strategize in various spaces with furrowed brows and jaws clenched, usually in relentless medium close-up. Occasionally, these talking heads prove they have bodies and simply run or walk down a hallway and into an office, car, or plane, where they continue to plan, progress, and clamp. Every now and then someone has a drink or makes love or someone goes outside to catch their breath. In Britain, ordinary citizens are advocating for peace or preparing for war; in Munich, German soldiers salute each other, as they greet Hitler in front of shop windows defaced with anti-Semitic threats.

As the story grinds to its spoiler-free finale, it becomes increasingly clear that the film would have been vastly improved if the filmmakers ditched the dueling band o’ brothers storyline and instead focused on Paul and his attempts to assassinate Hitler, always. a surefire crowd puller. Hugh is largely a reactive character—a small planet orbiting Chamberlain’s fading star—and enough of a gloomy presence and conceit that you begin to grudgingly begin to sympathize with his ridiculous wife, if not the people who give her such a horribly awful presence. put dialogue in the mouth. For his part, MacKay plays a witness to history, which perhaps explains all his energetic eye widening; too bad the character has no discernible inner life.

Paul is the better, more effective figure, in part because he faces the more obvious and imminent threat, one conveyed in large part by Hitler’s paranoia (and, well, Hitler himself), Nazi iconography, and your own knowledge of the history rather than the piles of dialogue or filmmaking. This danger gives Paul’s part of the story juice, as does Niewöhner’s fine impression of a pressure cooker leaking steam. Adding much-needed interest are the women in Paul’s life as well. They are stereotypes and certainly objectionable – Lena is more of a symbol than a person – but at least they are not taken as an insult to half of the world’s population. As Helen, Hüller may not have much to do, but her vitality and intelligence are irrepressible.