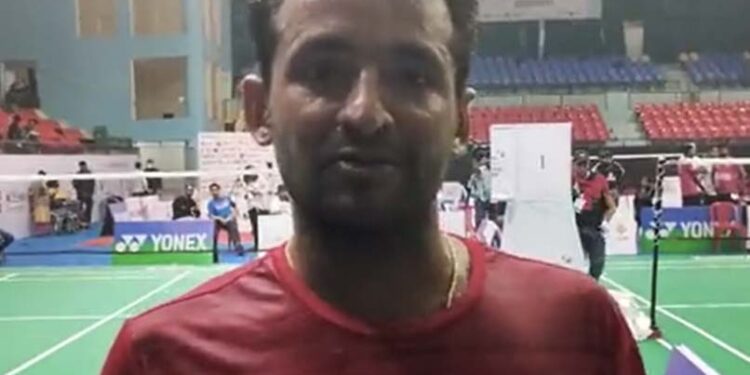 World No. 7 Nitesh Kumar, who won two gold medals in the recently concluded fourth Para-Badminton National Championship, thinks the wins against the Tokyo Paralympic medalist will give much confidence for next year’s Asian Games and World Championships. Haryana’s Nitesh Kumar doubled his gold after beating star shuttlers Pramod Bhagat and Manoj Sarkar in the Para-Badminton National Championship in Bhubaneswar. Nitesh along with his partner Tarun defeated the world number 1 Pramod Bhagat and Manoj Sarkar in straight sets in the doubles final.

“More than physical strength, mental toughness is needed when you play against experienced players (Pramod and Manoj). The two important wins here will give me a lot of confidence for the Asian Games and World Championships in 2022,” Nitesh Kumar told ANI after his final. men’s doubles won.

Nitesh Kumar defeated Paralympic gold medalist Pramod Baghat for the first time in the men’s singles SL3 semifinals on Sunday, then crossed the line against Manoj Sarkar in the top match.

Harayan’s shuttler continued to believe in his game and played the game with a positive attitude.

“It was a difficult game and beating them was a tough task as they are the champions. I’ve lost very close games to Pramod so far, but this time I made it. We’ve been playing against each other for a long time, so we know each other’s play and weaknesses,” said Nitesh Kumar.

“Pramod is the number 1 in the world, he is the champion, so people expected him to win. Even I thought Pramod would beat me, but I played with a positive attitude. I was under pressure, but then stayed with each point at a time.” he added.

Nitesh Kumar had won the bronze medal at the 2018 Asian Para Games in the men’s doubles and also put on a great show at Uganda Para-Badminton International 2021.

“I’ve been playing in international tournaments since 2016, so experience playing in every tournament counts. In April, I played in Dubai, where I got a lot of fame. Also, the Uganda Para-Badminton tournament helped me to prepare for National Championships” he concluded.