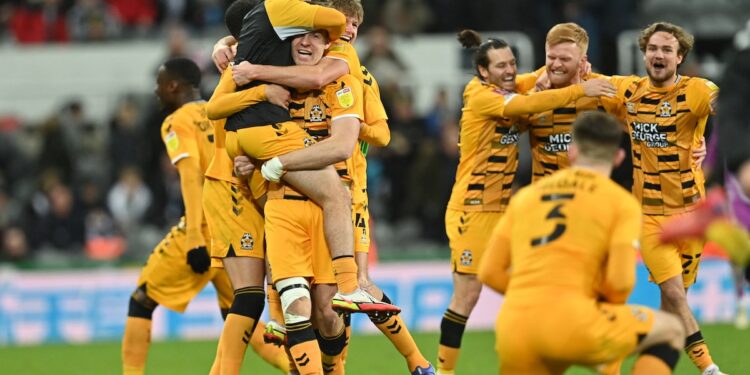 Newcastle’s miserable season on the pitch sank to new lows on Saturday as the Magpies were dropped 1-0 from the FA Cup by League One Cambridge, while non-League clubs Kidderminster and Boreham Wood also booked their fourth round places. . England international Kieran Trippier made his debut as Newcastle’s first signing since a controversial takeover by the Saudi sovereign fund. But Newcastle have only won one game all season and were embarrassed by a side two divisions down in front of a furiously packed house at St James’ Park.

Joe Ironside scored the only goal in the 11th minute of the second half when he turned to shoot home from close range after a scramble.

Two goals from Newcastle were disallowed and Joelinton was thwarted by a great save by Dimitar Mitov well into stoppage time.

But the disgruntled home fans showed no mercy at full-time as they now have to disband to try and stay in the Premier League.

Sixth-tier Kidderminster overcame the 79 pitches separating them from Reading in the English football period to beat the Championship side 2-1.

George Puskas gave the Royals the lead at Aggborough Stadium, but Sam Austin tied the score before Amari Morgan-Smith struck the winner eight minutes from time.

The full-time whistle led to a field invasion from fans from both sides, with some angry Reading fans confronting their own manager Veljko Paunovic.

Boreham Wood also upset a side two divisions above them with a 2-0 win over AFC Wimbledon.

Goals from Tyrone Marsh and Adrian Clifton on either side of halftime brought the National League Premier side into the fourth round for the first time.

Crystal Palace came from behind to beat Millwall 2-1 in a South London derby that was marred by cheers from the home fans as the Eagles knelt for kick-off.

The gesture takes place before every Premier League game, but Millwall stopped doing that more than a year ago.

Brentford defeated Port Vale 4-1, but Burnley were the first top-flight side to pull out after a 2-1 home defeat to Huddersfield.