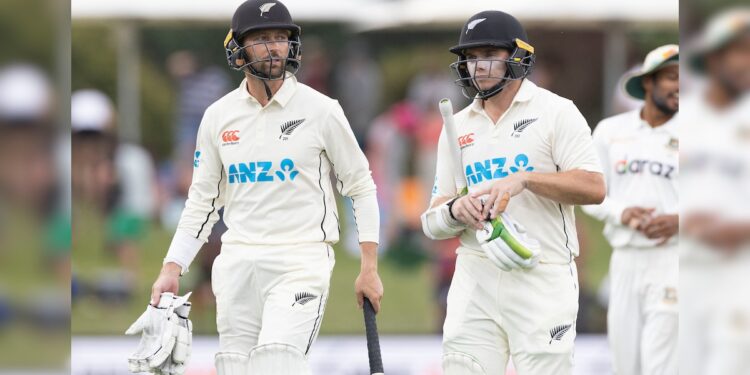 Tom Latham approached a double century as New Zealand reached 349 for one at punches to face Hagley Oval’s grim record for batters on day one of the second Test against Bangladesh in Christchurch on Sunday. The New Zealand captain was undefeated at 186 with Devon Conway at 99 when the Black Caps scored at will in what was known as a bowler’s paradise on day one. New Zealand, desperate for a win to save the series after losing the first Test, have braved the green surface and been in control since losing the toss and sent off into bat.

Latham and Conway put down 201 for the second wicket after Latham and Will Young (54) produced a 148-point lead for the first wicket.

Hagley Oval requires bowlers to maintain good line and length to deliver wickets on the green surface, and Bangladesh has been guilty of straying too often.

Taskin Ahmed, Shoriful Islam and Ebadot Hossain fed New Zealand on a diet of loose deliveries and as a result Bangladesh spent all day chasing the ball to the border in a field where the average score in the first innings is 263.

Latham, who disappointed in the first Test with innings of one and 14, progressed at a consistent pace, with his first 50 receiving 65 deliveries, the second 68 and the third 66.

The hundred moved Latham to fourth on the list of New Zealand makers led by Kane Williamson with 24.

The only time he was alarmed was during Ebadot Hossain’s opening when he was doled out twice lbw, only to have the layoffs reversed after review.

Bangladesh made a vociferous appeal to Latham’s deficit late in the day, but replays showed the ball missed the bat.

After toiling fruitlessly through the morning session, Bangladesh missed a chance for a wicket in the first over after lunch in what turned out to be a seven-run farce.

A Will Young rim from Ebadot was dropped by Liton Das on the third slip, giving New Zealand a run for three.

As the bowler and the fielders expressed their frustration, the throw back went to the bowler’s end where no one backed up and the ball rushed through to the boundary.

Much to Ebadot’s chagrin, Young scored a five in his next over when he hit a quick single and Mehidy Hasan’s throw to the stumps from the middle of the wicket ran back to the fence.

Young would go on for another 21 runs before Mohammad Naim grabbed a drive attempt to give Shoriful Islam the first and only wicket.