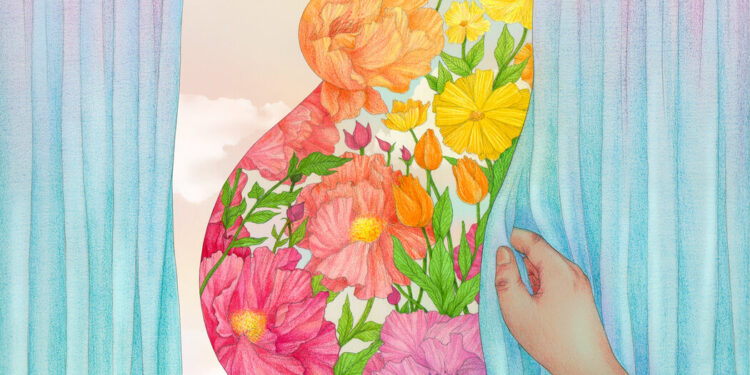 On November 25, Genesis Paras announced to her family and friends via Instagram that she had a new daughter.

“Everyone meets our little bat Harlow Phoenix Paras,” she wrote.

All baby announcements are somewhat of a surprise; no one can ever know for sure when a baby will be born. But this one was especially surprising because Ms. Paras, 31, a stay-at-home mom in Anaheim, California, hadn’t told anyone except her parents and her husband’s parents that she was pregnant.

Ms. Paras had had traumatic experiences with previous pregnancies. She had a series of miscarriages and a newborn baby girl had died. (In addition to Harlow, she has a 2 year old son) Covid added to the fear she already felt about being pregnant, and she didn’t want to ruin it. “With Covid and how pregnant women are so susceptible, I was terrified the entire pregnancy that I was going to die or she was going to die,” she said. “I thought it was too good to be true.”

While the pandemic increased her anxiety, it also gave her a way to see no one and share her news. Her unvaccinated son gave her the perfect excuse to stay home and away from gatherings so no one could see her growing belly.

“Keeping it a secret has made my pregnancy so much calmer. I didn’t have to listen to people telling me it would be okay or not to be afraid anymore,” she said. “I had my space to feel what I wanted, and I could stay in my own bubble.”

“I wish there was a way for women to hide that they were pregnant even without a pandemic,” she added. Of course, in prepandemic times, most pregnant women didn’t have the luxury of deciding when to share their news. They had to go to work and social events, and once they started showing, it was clear they were pregnant.

Some women, especially frontline workers, still don’t have that choice. But the pandemic has changed the reality for many others, leaving pregnant women out of sight from colleagues (when working remotely) and friends and family because social contacts are so limited. Added to this is the freedom to talk about their pregnancy when they feel comfortable and when they don’t think it will harm them professionally or psychologically.

“Many of the women I’ve seen during the pandemic have chosen not to tell people they’re pregnant until they feel ready,” said Katayune Kaeni, a psychologist who specializes in perinatal mental health. “The ability to keep it for other people because of Zoom has benefited a lot of people.”

This is especially true for women who are highly anxious or have experienced pregnancy loss, such as Ms. Paras. “It can be incredibly stressful to answer questions from people who have the best of intentions, but don’t know how their questions are going to end up or how to make them feel minimal or insensitive,” said Dr. kaeni.

With her other pregnancies, Mrs. Paras did receive unsolicited questions and advice. “Especially women of the older generation would ask me questions like, ‘Are you carrying twins?’ ‘Is the baby healthy?'” she said. “People who knew me would raise my daughter or tell me that this pregnancy was going to be all right, when there was no way they could have known.”

“Those questions were stressful,” she said. “It was a lot better not to interact with other people when I was pregnant during the pandemic.”

Other pregnant women like to keep their pregnancy a secret to avoid judgment from others.

Fabulous Flores, 30, a college graduate living in Absecon, NJ, gave birth to a girl in May. When she became pregnant, she was not married to her boyfriend, and she was relieved not to have to tell her mother and struggle with her disapproval at such an emotionally charged time.

“My mom wouldn’t mind if I had an illegitimate child, and I was afraid to tell her, so I was happy to put it off until I was ready,” she said. “Luckily my mom was very strict and stayed inside, and so did we, so no one had to see each other.” (When the baby arrived, her mother stepped on board and is now a supportive grandmother.)

Ms. Flores also felt relieved that she didn’t have to show her changing body to other people: “I was so nervous I was going to get huge and bloated and not want people to see me,” she said. “Part of me was like, ‘Am I not attractive anymore because I’m a mom?’ I was glad I didn’t have to see people’s reactions.”

dr. Kaeni noted that there are many body image issues that women face during pregnancy. “I can see how women don’t want the expectations of the people around them that they’re supposed to be happy and radiant and all that good stuff,” she said.

Then there are professional concerns.

“Women are often reluctant to announce they are pregnant, and for good reason,” said Dina Bakst, founder and co-chair of A Better Balance, an organization that helps workers, especially mothers. “Prejudice against pregnant women and mothers is still widespread in the workplace, and this bias takes many forms. It may be intentional; it can be implicit, it can be unconscious, it can be structural.”

Ms Bakst said that often when a woman announces she is pregnant, “stereotyping occurs that she is less committed to her job and less capable.”

She gets calls, she said, from women announcing they’re pregnant and then being passed over for a promotion or from a project that requires travel or late nights.

Of course, not all pregnant women have the luxury of hiding their bellies on Zoom. A primary care nurse or a woman who works in a factory cannot do their work remotely. And even if a woman can work remotely, she can’t keep her pregnancy a secret all the time. In states with paid maternity leave — such as New York — an employee must give 30 days notice if they intend to use paid maternity leave and other benefits.

But women with the option to keep their pregnancy private during the pandemic have discovered many benefits in doing so.

Adrienne Alexander, 36, who works for a union in Chicago, couldn’t hide her pregnancy five years ago when she gave birth to her first daughter. “It was an election year and I remember wearing T-shirts in the campaign office and eating a lot of snacks,” she said. “It was much more visible.”

When she gave birth to her second daughter in July 2020, her work environment had changed dramatically. “I wasn’t in the office, everything happened via Zoom,” she said. “It was easy to hide. I had a computer stand, so you couldn’t really see my body, and I just didn’t get up. When I did, I turned the camera off and adjusted again.”

She shared her news with her immediate team so they could prepare for her maternity leave. But she found it refreshing that most of her other colleagues didn’t know. “It’s just easier not to answer people’s questions or to be the subject of conversation every time,” she said. “I just wanted to focus on my work and not talk about the challenges of motherhood during the pandemic. I didn’t want my identity to be about being a mother.”

There are some downsides to keeping a pregnancy private.

It can feel lonely when no one knows, Ms Paras said. “I felt like sometimes I needed advice about having a toddler and being pregnant,” she said. “There were times when I felt like I needed to vent or tell someone I was in a lot of anxiety. But I’m still glad I didn’t tell anyone. It was the easier of two evils for me.”

dr. Kaeni pointed out another potential drawback. “The downside of keeping it private is that you don’t get the special attention some people want or get from a pregnancy,” she said.

Some people anger family members and friends by withholding such a big update from them. “My best friend was just really shocked,” said Ms. Flores. “He got very quiet and said he needed some time to process. He came over when my daughter was born, but it took a while.”

Another downside she faced from not telling anyone she was pregnant: “I didn’t have a baby shower.”

But many women report that they are grateful that the pandemic has given them at least a choice. They now have the opportunity to weigh the pros and cons of sharing their pregnancy with the world.

“If I had a choice again, I think I would keep my next pregnancy private,” said Ms Alexander.