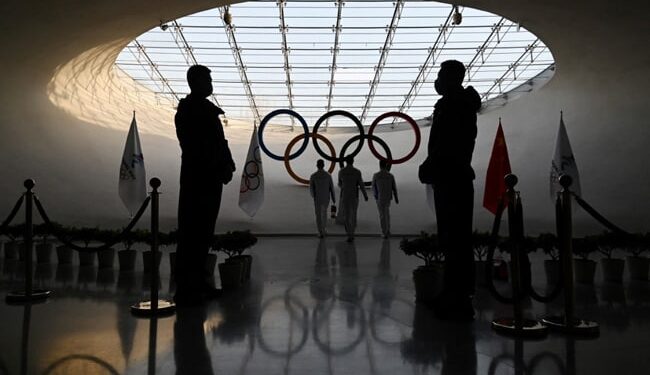 People living in China must also be quarantined if they leave the bubble to return home.

Beijing on Tuesday sealed its Olympic “bubble” and prepared the Games’ venues, transportation and personnel for the world’s most rigorous mass sporting event since the global pandemic.

China, where the virus emerged in late 2019, has adopted a zero-tolerance strategy for Covid-19 and is pursuing the same approach to mitigate the potential impact of the pandemic on the February 4-20 Winter Olympics and the subsequent Paralympic Games.

Starting Tuesday, thousands of Games-related employees, volunteers, cleaners, cooks and bus drivers will be shrouded in the so-called “closed loop” for weeks with no direct physical access to the outside world.

That contrasts with the Covid-delayed Summer Olympics in Tokyo, which allowed some movement in and out for volunteers and other staff.

The global media and about 3,000 athletes are expected to arrive in the Chinese capital in the coming weeks and will remain in the bubble from the moment they land until they leave the country.

Anyone entering the bubble must be fully vaccinated or undergo a 21-day quarantine when they land, and anyone entering is tested daily and must wear face masks at all times.

In an interview with AFP last Friday, Zhao Weidong, head of the media department of the Olympic Organizing Committee, said Beijing was “fully prepared”.

“Hotels, transportation, accommodation, as well as our science and technology-led Winter Olympics projects are all ready,” Zhao said.

Fans won’t be part of the “closed loop,” and organizers will have to make sure they don’t interfere with athletes and others in the bubble.

People living in China must also be quarantined if they leave the bubble to return home.

The system includes dedicated transportation between locations, with even “closed-loop” high-speed rail systems operating in parallel with those open to the public.

It is expected to be operational well into late March and possibly early April.

Most major locations are outside the capital.

But foreign diplomats in China have told AFP that the measures seem so impregnable that they worry they will not be able to provide proper assistance to their citizens in the bubble.