On the eve of Lockdown, a packed first date 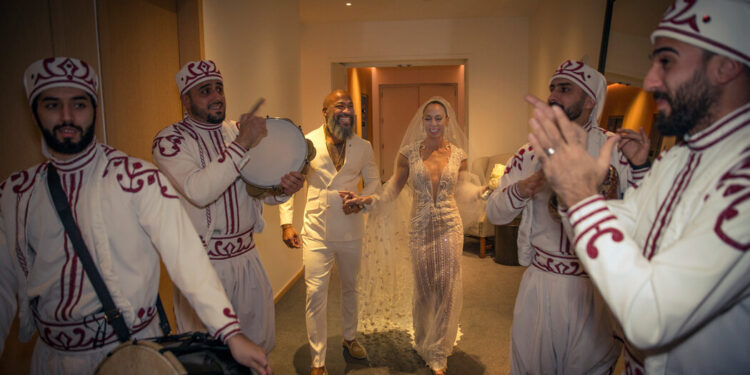 On January 28, 2020, Sharon Deckey Mussalli was scrolling through Instagram when she came across a black-and-white photo of Shaun Robert Jenkins, a senior training manager at Tone House, a trendy gym in New York City.

The photo was posted by a mutual friend on Mr. Jenkins’ birthday and showed him in a tuxedo and bow tie. It “stopped me dead in my tracks,” said Ms. Mussalli, 45, the executive vice president of revenue and operations at media company Bustle Digital Group. “He was so handsome that I thought maybe this wasn’t a real person.”

Though they had never met, she didn’t hesitate to send him a direct message, writing, “I think it’s only fitting that I wish you a happy birthday.”

Ms Mussalli’s boldness was well received by Mr Jenkins. “It just radiated so much confidence and really piqued my interest,” he said.

mr. Jenkins, a divorced father of two young girls and originally from Brooklyn, was living in Jersey City, NJ at the time. He graduated from Union College in Schenectady, NY, and is studying for an MBA at New York University.

Ms. Mussalli, a resident of Pawtucket, RI, then lived in the Gramercy Park neighborhood of Manhattan. She graduated from Tufts University and received an MBA from the Massachusetts Institute of Technology.

They continued to exchange messages on Instagram, covering everything from politics to favorite movies and novels. Mr. Jenkins said he was struck by Mrs. Mussalli’s intellect; she said she thought “conversation came so naturally” with him.

The two later exchanged numbers and over the next few months tried to find time in their busy schedules to go on a date. In March, the city prepared for a lockdown due to the pandemic. On March 13, before it officially went into effect, “we got as much in as possible,” said Mr. Jenkins.

He arranged their first date with stops at three of his favorite lounges: the New York Edition, the Sevilla and the Rose Bar.

Both whiskey drinkers felt very much at home with each other during their tour of the city. “People at the bar didn’t even think we were on a first date,” Ms Mussalli said. “It was just great chemistry.”

Despite the approaching lockdown, before the date ended, Mr. Jenkins asked Ms. Mussalli if she wanted to go out with him again. A few days later, on a Saturday morning, they woke up in a very different New York. With businesses closed and dozens of new restrictions in place, their options for operations were extremely limited.

By the time the worst of the early pandemic was over, they were in love and had experienced both highs and various lows. Four relatives of Mr Jenkins died of Covid and Mrs Mussalli’s father died of cancer.

“But the good times outweighed the bad,” said Mr. Jenkins. “It was like being near my mirror. I was just consumed by her.”

On September 25, 2020, they entered into a commitment – neither of them wanted to use the word “engagement” because, as Mr. Jenkins explained, they felt the term implied that “you are not yet fully committed.”

The couple, who now live together in the Chelsea neighborhood of Manhattan, married on January 28, Mr. Jenkins’ birthday, at the Public Hotel in New York. Ramez Baddour, a secretary of Universal Life, performed for 69 vaccinated guests, celebrating with the couple what was “just a raw and honest relationship” from the start, Mr. Jenkins.