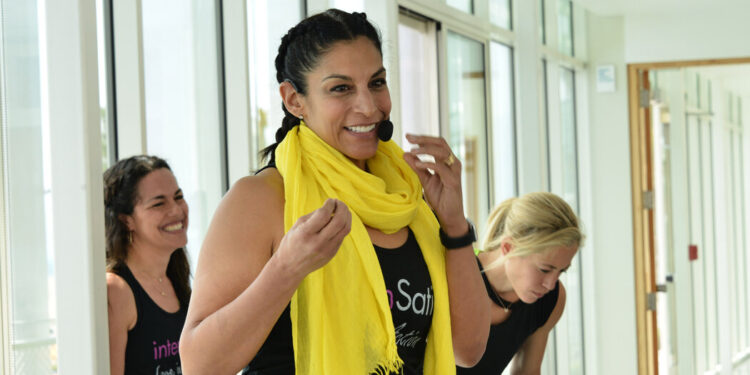 Patricia Moreno, who injected a dose of spirituality into the world of fitness and created a popular exercise program called intenSati, which became a staple in some Equinox gyms and a YouTube presence, died January 22 at her Los Angeles home. She was 57.

The cause was cervical cancer, said her wife, Kellen Mori.

Ms. Moreno started teaching training classes more than two decades ago and founded intenSati in 2002, fusing the word “intention” with the Sanskrit term “sati” for mindfulness or awareness. In between bouts of kickboxing and aerobics, she would alternate choruses like “I’m worthy of my own love” or “All I need is inside of me,” with liberal doses of mindfulness, diaries, and other self-help practices.

It was an amalgamation of spirituality and practice, something relatively new.

Posted online, her workouts and spoken positive mantras – which she called “affirmations” – attracted a significant following, including 6,500 YouTube subscribers and 18,000 Instagram followers. The program includes more than 1,000 “intenSati leaders,” who teach their own classes, and has generated about $5 million in revenue, according to Lucy Osborne, who took over intenSati after Ms. Moreno’s death.

Ms. Moreno’s method resonated with those seeking spiritual and emotional connections to wellness. “People cry all the time in class,” she told Cosmopolitan magazine in 2013. “When I train new intenSati instructors, I always say, ‘If people cry, you’re doing your job well.’”

One of those instructors, Natalia Mehlman Petrzela, is also a history professor at the New School in Manhattan and is writing a book on fitness in America. “Today there are many programs that combine the language of enlightenment with intense training,” she said in an email, “but Patricia, who came from the aerobics world of the 1980s and was a serious student of yoga and meditation, was very early to integrate the two.”

What sets intenSati apart from other fitness programs, added Professor Mehlman Petrzela, is “the sense of playfulness and presence outside the luxury, high-end fitness world.” In addition to Equinox clubs, primarily in New York and Los Angeles, intenSati instructors teach in community centers and have made free training available on social media.

Danielle Friedman, the author of “Let’s Get Physical: How Women Discovered Exercise and Reshaped the World” (2022), said in an email that Ms. Moreno’s program “helped shift the language of fitness culture from a language of self-criticism, guilt and shame and towards celebration, joy and affirmation.”

Patricia Esperanza Moreno was born on August 14, 1964 in San Jose, California, to Jose and Edith (Salcido) Moreno. Her father was a lawyer and her mother owned a restaurant. She had 10 siblings. After graduating from James Lick High School in San Jose, she attended San Jose State College.

As an overweight child, Ms. Moreno became interested in fitness as a way to control her weight. She started teaching fitness classes in California in her teens. In the 1990s, she moved to New York City and found work teaching a kickboxing fitness class at a newly opened Equinox gym; she eventually became one of the highest paid instructors.

A 1995 fitness club article in DailyExpertNews described Ms. Moreno as one of Equinox’s most popular teachers in New York. She “appears in a flannel shirt, black pants and a white stark white shirt,” wrote reporter Jennifer Steinhauer. “She takes a few steps here and there and dances almost without self-consciousness, as if all the people in her class were guests at a party in her living room and happened to be wearing Lycra.”

Mrs Moreno and Dr. Mori, a dentist, met in 2006 when Dr. Mori took an IntenSati class in Manhattan. They got married in 2008.

After her stage four cervical cancer diagnosis, Ms. Moreno continued her intenSati practice, documenting her experience on Instagram and other social media platforms, highlighting the spiritual side of her work.

“This diagnosis and everything that comes with it,” she wrote on Instagram in September, “reveals to me how important it is to focus on reconnecting with the wider part of me and my view of myself as a physical body. not limiting.”