Peak Omicron? Experts warn not to fall into that trap 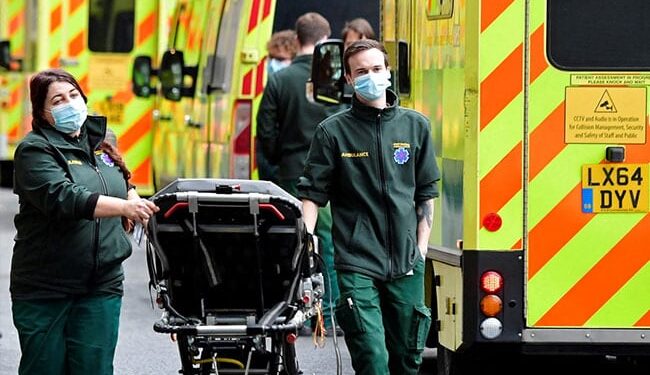 The seven-day average of UK cases has fallen by 30,000 from its peak,

A rise in coronavirus cases caused by the Omicron variant may have peaked in some parts of Europe, but medics say the impact will continue to be felt across the region, with hospitals still at risk of a stampede of recordings.

Health experts and politicians caution against complacency, saying it’s not yet clear whether their data reflects the full impact of the Christmas and New Year’s holidays, when families gather indoors for long periods and the risk of intergenerational spread of the virus may be greater.

While vaccination and the lower severity of the Omicron variant mean that hospitalizations are lower than in previous waves of COVID-19 infections, Europe is still responsible for about half of global cases and deaths.

But there are growing signs that the increase in infections caused by the Omicron variant, which was first identified in southern Africa and Hong Kong, is leveling off or even declining in some areas.

Britain’s seven-day average of cases is down 30,000 from its peak, the Spanish prime minister has said the number of infections is stabilizing and a French public health institute has said the wave will peak in mid-January.

“We see some places where the peak is being or has been reached. It may be a little earlier than expected, but remember that the region is very diverse,” Hans Kluge, World Health Organization director for Europe, said this week.

“So we have to consider the eastern part of the region, the Central Asian republics, where this peak may still come.”

Health officials in Sweden and Switzerland have said the peak in those two countries is expected to be reached by the end of this month.

“If people-to-people contacts remain at the same level, we could peak in the next two weeks. If people are more careful, it will take longer,” Tanja Stadler, head of the Swiss COVID-19 scientific task force, told reporters on Tuesday.

The trend reflects the Omicron wave in Africa, which the WHO’s Africa office said appeared to be plateauing, making it the shortest rise in cases to date.

Denmark, where cases are dominated by Omicron, eased some restrictions this week, with the health minister saying the epidemic in the country was now under control.

The UK Office of National Statistics has said the growth of infections in England has slowed. It is estimated that one in 15 people was infected in the week ending January 6, the same as the week before.

UK Health Secretary Sajid Javid said on Thursday that although the number of hospital admissions had started to slow, the health service would remain under pressure in the coming weeks.

“Omicron’s much greater portability still has the potential to hospitalize significant numbers of people,” he said.

He said there were encouraging signs of declining infections in London and the east of England, but “we are still seeing infections in other parts of the country at the moment and the data does not yet reflect the impact of people returning to work.” and school” after Christmas and New Years.

Scotland, which has put in place stricter restrictions to fight Omicron than England, will lift those measures on Monday.

But Italy’s National Institute of Health said on Friday that weekly incidence and hospital bed occupancy rates continued to rise this week.

German virologist Christian Drosten warned on Friday that there were far too many Omicron cases and that this reduced benefits by being milder than other variants, and Germany’s health minister said more coronavirus restrictions may be needed if hospitals are overwhelmed.

With Omicron initially spreading rapidly among younger people, epidemiologists have said its impact on hospital admissions could be unpredictable as it moves into older age groups, even if the number of cases of death falls.

But the ZOE COVID Symptom Study app, which collects data on self-reported symptoms to estimate prevalence in Britain, has found that the Omicron wave has peaked and cases among the elderly have stabilized at a low level.

“Just like it went really fast, it also went down really fast and I think it’s good news, it means that the pressure on the hospitals will decrease,” Tim Spector, the app’s chief scientist, told Reuters.

Still, the Omicron variant won’t go away, he said.

“It’s just so contagious. We can’t pretend it’s going to go down to trivial levels, but it should be manageable levels,” he said.