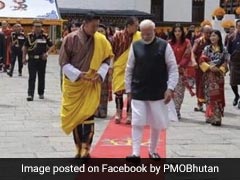 “HM emphasized all the unconditional friendship and support that Modiji has provided over the years and especially during the pandemic.

“Much deserved! Congratulations from the people of Bhutan. Seen in all interactions as a great, spiritual human being. I look forward to celebrating the honor in person,” the cabinet of the Prime Minister of Bhutan said in a statement on Facebook.

He wished his countrymen on the National Day of Bhutan.