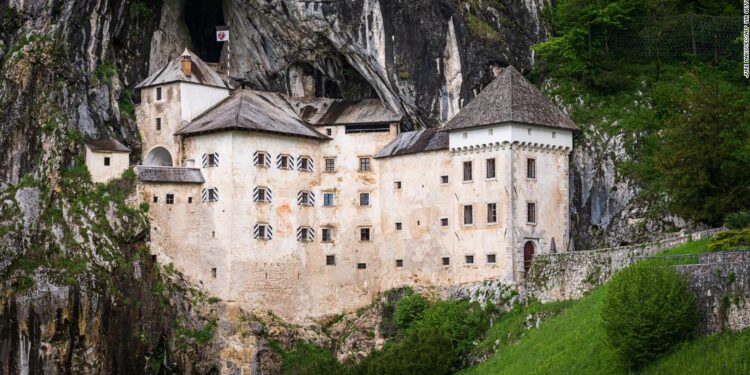 (DailyExpertNews) — Predjama is one of the most extraordinary castles in the world, built in the mouth of a cave complex at the end of a valley in southwestern Slovenia.

Set halfway up a vertical cliff face of 123 meters high, it appears in records dating back to 1202 and is listed by Guinness World Records as the world’s largest cave castle.

With a Renaissance facade dating back to the 1580s, the word ‘majestic’ doesn’t even begin to describe it. But for guide and historian Vojko Jurca, one of the highlights is, at first glance, a bit disappointing.

“This is it,” he says proudly, pointing to a toilet in the outbuilding with a pitched roof and a boarded-up door.

It may look inconspicuous, but the story behind it isn’t.

The story centers on robber baron Erasmus von Lueg, a local Robin Hood hero who fled to the castle in the mid-1480s after killing Count Pappenheim, Marshal of the Imperial Habsburg court, in a duel whose legitimacy has been disputed.

In retaliation, a siege of Predjama was ordered by the German Emperor Frederick III.

But Erasmus held out, aided by a network of secret tunnels dug into the rocks that allowed him to bring provisions and collect rainwater.

He mocked his opponents by sending them fresh cherries brought in from the Vipava Valley, 13 miles west, using those underground passages.

The end would come, after a year and a day, when Erasmus was betrayed by a servant.

As Jurca relates, when Erasmus went to the annex on a terrace on the third floor, the servant lit a wooden torch as a signal. A moment later a cannonball whistled through the air, killing Erasmus in the midst of his last bowel movement.

The outbuilding has obviously been rebuilt in the intervening years.

From Slovenia to Westeros

Final moves: Erasmus was killed when a cannonball hit the outbuilding of the castle.

Erasmus’ manner of death has not escaped the notice of “Game of Thrones” fans pointing to the similar, undignified end of Lord Tywin Lannister, who was shot with a crossbow while sitting on his bathroom throne.

They also note that the last owners of Predjama, the Windisch-Grätz family, who used the castle as a hunting lodge until the end of World War II, have on their coat of arms a wolf, the seal of the Stark noble house.

Coincidentally, author George RR Martin visited the castle one evening in June 2011, after a book signing in Trieste.

“On the way home we stopped at the most amazing castle, built in the mouth of a huge cave. A castle in Westeros should definitely be modeled on this, it was an eye-catcher, especially at night,” he says in a statement. blog after.

Legend and history are only part of the appeal of Predjama Castle. You really have to pay a visit to understand how human enterprise was so organically linked to nature.

Approaching the castle from any direction, it’s almost completely hidden, only visible at the last minute – while sentries around the castle could have seen anyone coming immediately.

Once inside, it’s clear that safety rather than comfort was the main concern in the Middle Ages — the castle is impregnable, but the cold and damp make it almost unlivable.

Today, entering the castle is through a drawbridge. The original entrance was higher, where you can see two faint doors. They were reached by ladders that could be quickly retracted.

In the past, visitors first entered the courtroom, where rough justice was delivered. Few of the ruler’s subjects would be admitted further than this, unless they were unlucky.

Behind a thick wooden door is a torture chamber, which is uniquely located in a real cavernous dungeon. The preferred punishments here were the rack, on which prisoners were stretched, and the horse, a painfully pointed triangular device that they had to straddle.

One of the most pleasant spaces follows. The dining room is insulated by walls almost one and a half meters thick and heated by the small but functional kitchen, in which a slit doubles as a natural extractor hood.

You can also inspect an original latrine, a protruding chair above the cliff that lets gravity do its dirty work. Erasmus would have used straw, dried moss and cabbage leaves instead of toilet paper, or at least he would have done so before being blown to smithereens.

The castle barracks is now a weapons museum.

A staircase leading up to the third floor reveals the cannon loops, arrow slots, and assassination holes that were used to pour boiling oil or molten resin on the besiegers.

There is the open terrace. Here you have a view of the whole valley, as well as the most famous outbuilding in Slovenian history.

Next door is the bedroom. It is the warmest room, as it is the only one with a fireplace. Until the 1980s, castle keepers lived here.

Upstairs is an attic that served as barracks and lookout post. The view over the Lokva Valley is uninterrupted and beautiful.

The barracks have been converted into an armory museum with medieval weapons such as battle axes, halberds, crossbows and flails.

Interestingly, a passageway here leads directly to the torture chamber. Supposedly anyone who sleeps on duty can be dragged into it unceremoniously.

From here you can also enter the cave’s interior, exploring until the light from the entrance dims to a speck, allowing you to contemplate the surroundings.

The extensive limestone cave system in southern Slovenia is called karst, after the Latin name Carsus given to the plateau above Trieste.

Below the castle, a large cave extends for 14 miles, the second in length of the nearby Postojna complex.

There is no tourist infrastructure in this large cave, but it is possible to visit during the summer months with the right caving equipment, lamps and a specialist guide. It is closed in winter because a colony of Schreiber’s long-fingered bats use it for mating and overwintering.

The castle’s Renaissance facade dates from the 1580s.

Back at the castle, a one-way system leads back to the Knight’s Chamber, which is known for its Gothic alcoves and ox-blood-painted ceiling.

Here and there are glimpses of how the builders of the structure made efficient use of their rocky situation. A small shaft at the exit became a kennel for hunting dogs, while a cave mouth below the castle served as stables.

Leaving the castle, guide Vojko has one more stop on his tour – a nearby village where a diseased lime tree is propped up in the cemetery of Our Lady of Sorrows.

The church was consecrated around 1450 by the Bishop of Trieste, the future Pope Pius II.

“The legend has it that this lime tree was planted on Erasmus’ grave,” says Vojko.

The tree was badly damaged by a fire in 2001, but meant so much to the villagers that tree surgeons were called in and the trunk was split and repaired.

It still proudly survives, as does Predjama Castle itself.