Ready to get married already? Some couples face procrastination fatigue 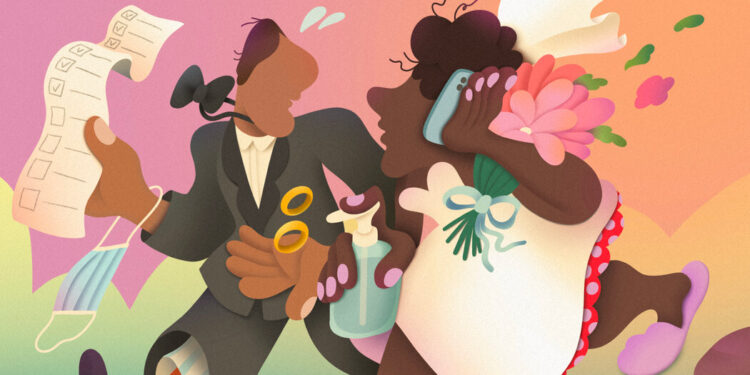 “As companies, they can’t keep canceling and rescheduling. If events can actually go ahead and all security measures are in place — vaccination, testing, all that — it’s hard for a venue to allow a customer to cancel or change a date without any repercussions,” she said.

Seth Rosen, 37, and Martha Burla, 36, who live in Chicago, were originally supposed to get married in January 2021, but have postponed the event for a year. “The idea of ​​scaling down, doing something smaller, just having a little family event wasn’t that interesting to either of us. We’ve said we’ll wait and have a full wedding when we can,” Mr. Rosen said.

The news about the Omicron variant was particularly frustrating, he said, because the venue they booked for their wedding on January 15 would not allow them to cancel or postpone and still get their money back. Due to safety concerns, guests also began to drop out, resulting in the kind of scaled-down event the couple had hoped to avoid by postponing it in the first place.

“Last year people had to cancel a bit. We had no options then, the city was locked, we had to cancel,” Ms Burla said. “But this year it doesn’t feel like we have options either.”

Mr Rosen said the cancellations were “completely understandable” and added “we are not upset about it.” With no alternative but to move forward, the couple went into quarantine for two weeks in early January.

“Since the venue wouldn’t let us cancel, I thought, ‘What’s the worst-case scenario?’ And one of us both getting Covid was clearly the worst-case scenario,” Ms Burla said. The lead-up to their wedding “was a series of highs and lows,” including guest cancellations in December and “at least 20 cancellations in the two days before the wedding.” The couple had originally invited 180 guests; in the end, some 90 people attended.

But “most importantly,” she said, “we got married, had a beautiful and very fun day and no one caught Covid at our event, which felt like a miracle.”