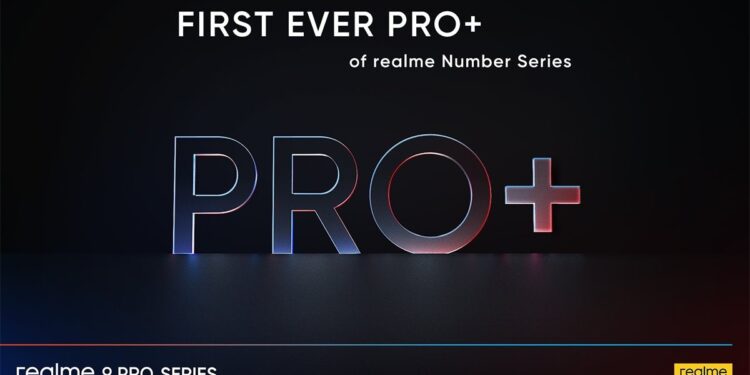 The launch of Realme 9 Pro+ has been teased by the Chinese company. The new model is expected to come alongside the regular Realme 9 and Realme 9 Pro. While Realme has not yet provided official details, Realme 9 Pro+ specs have surfaced on the web in the meantime. Some renders that supposedly show the new Realme phone have also appeared alongside. The Realme 9 Pro+ is said to have three rear cameras and a punch-hole screen design. The phone may also come with an octa-core MediaTek Dimensity 920 SoC.

On Thursday, the official Realme India Twitter account tweeted the teaser image confirms the launch of the Realme 9 Pro+ in the Realme 9 series. The teaser shows the Pro+ branding of the new phone.

In addition to the official confirmation, the Realme 9 Pro+ specs and renders suggesting the new phone’s design have been shared by Smartprix in collaboration with tipster Steve Hemmerstoffer – known on social media as OnLeaks.

The renders show the Realme phone with a gradient back and the punch-hole screen design. The handset also appears to have a triple camera setup on the back along with an LED flash.

Realme would bring the new smartphone in three different colors, namely Aurora Green, Midnight Black and Sunrise Blue. However, the renders reportedly show the phone in Midnight Black color. In addition, the tipster claims that the Realme 9 Pro and Realme 9 Pro+ will both have the same design language, with slight differences in size and weight.

As for the specs, the Realme 9 Pro+ is said to have a 6.43-inch full-HD+ Super AMOLED display with a 90Hz refresh rate. The phone is also said to include the MediaTek Dimensity 920 SoC along with up to 8GB of RAM. The Realme 9 Pro+’s triple rear camera is said to have a 50-megapixel Sony primary sensor, along with 8-megapixel and 2-megapixel secondary sensors. There would also be a 16-megapixel selfie camera sensor on the front.

The Realme 9 Pro+ comes with up to 256GB of onboard storage, according to the reported details. The phone is also said to have a 4,500 mAh battery.

A few weeks ago, the Realme 9 Pro+ is said to have been certified by the Bureau of Indian Standards (BIS) and the Bluetooth Special Interest Group (Bluetooth SIG). A recent report also suggested that the phone could debut alongside the Realme 9 Pro sometime in February.

ADVERTISEMENT
Madhav Sheth, CEO of Realme India, joins Orbital, the DailyExpertNews podcast for an exclusive in-depth interview, as he talks about the 5G push, Make in India, Realme GT series and Book Slim, and how stores are improve reputation. Orbital is available on Spotify, Gaana, JioSaavn, Google Podcasts, Apple Podcasts, Amazon Music and wherever you get your podcasts from.