Reawakening the Antichrist (and other lost opera gems) 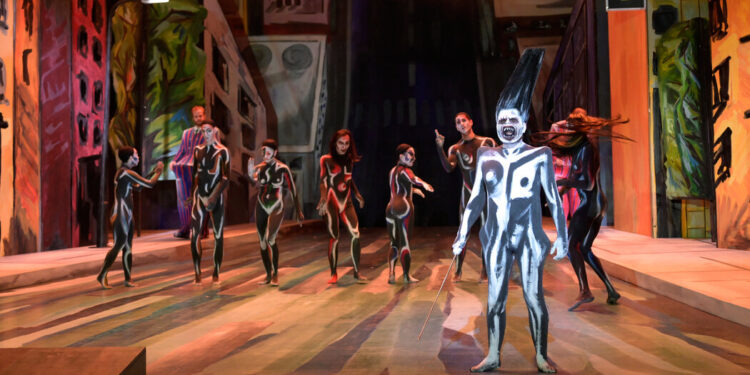 BERLIN — The whore of Babylon, in a grotesque fat suit, sings a hymn to hedonism halfway through the Deutsche Oper’s new production of “Antikrist” here.

Ersan Mondtag’s exuberantly colourful, boldly stylized staging of what the Danish composer of this work, Rued Langgaard, called a ‘church opera’ is an almost breathless whirl. Nodding to various art movements of the early 20th century, including Symbolism, Expressionism and the Bauhaus, it is only the third complete staging of the work, written and revised between 1921 and 1930, but at the time of Langgaard’s death. was not performed, in 1952.

Inspired by the book of Revelation, “Antikrist” will premiere January 30 and run through February 11. It is the latest in a series of operatic rediscoveries at the Deutsche Oper, which in recent decades has made a point of highlighting works from outside the canon. In recent seasons, it has given much attention to Meyerbeer’s “Le Prophète” as part of a series devoted to that once-famous 19th-century composer, as well as two early-20th-century titles, Korngold’s “Das Wunder der Heliane” and Zemlinsky’s ” Der Zwerg.”

Together with the Deutsche Oper’s commitment to commission new operas, these rediscoveries are a way to refresh and expand the notoriously limited operatic repertoire. An essentially unknown work like “Antikrist” presents a host of logistical challenges, from training singers to attracting audiences, but it can give the director a rare creative license. The absence of deeply rooted performance traditions can be artistically liberating.

“It’s absolutely crazy,” Mondtag, who also designed the sets and helped design the costumes, said of the piece. “It is something between Schoenberg and Wagner, and like a sacred opera without linear narration. So you have the freedom to do what you want.”

Mondtag, one of Germany’s leading young avant-garde directors, put the finishing touches to ‘Antikrist’ in March 2020 when the pandemic first put the country on lockdown. Since then, he has staged two other rarely performed 20th-century works. , Schrekers “Der Schmied von Gent” and Weills “Silbersee”, both for the Flemish Opera in Belgium. A relative newcomer to opera, Mondtag said it was not surprising that he was given commissions like these, rather than warhorses like ‘Tosca’.

“It’s considered more experimental to do unfamiliar things,” Mondtag said. In his short time working in opera, he added, he has built up a certain reputation as an “expert on unstaged or unknown operas.” I didn’t choose that; it just happened that way.”

When the Deutsche Oper went live again in the summer of 2020, it focused on a new production of Wagner’s four opera ‘Ring’. All four titles premiered at the house during the pandemic, but after “Ring” played its final performances earlier this month, the company turned its attention to the delayed premiere of “Antikrist.”

“It’s such impressive music that I think it’s necessary to do it,” said Dietmar Schwarz, general manager of the Deutsche Oper. He added that while he would love it if Mondtag’s production sparked new interest in ‘Antikrist’, his main aim was to find a curious and open audience in Berlin.

“We’re not necessarily doing it for the survival of this old opera,” he said.

But even if rediscoveries are limited to a single production, German opera managers have increasingly made it a priority. In contrast to the United States, today it is more common for the Metropolitan Opera or the Lyric Opera of Chicago to perform a world premiere that draws attention than to dust off a forgotten work. (Leon Botstein’s revivals at New York’s Bard College are a notable exception.)

“There’s a wealth of stuff out there,” says Barrie Kosky, who runs the Komische Oper in Berlin. Since joining that company in 2012, he has scored some of his biggest hits with productions of long-overlooked works, including operettas by German-speaking Jewish composers such as Paul Abraham and Oscar Straus.

“Let’s face it, we can’t survive on just a diet of the 20 most famous titles,” Kosky said.

“Of course it’s always a risk because sometimes you bring a piece back and it doesn’t work,” he said. Or, he added: “You say, ‘Look, we’re bringing this back. It’s not a perfect piece, but this score is still worth listening to.’ I think that’s also very legit and valid; I don’t think everything has to be a masterpiece.”

Kosky pointed to his own eclectic programming at the Komische Oper — where the house sold 90 percent of its seats before the pandemic — as proof that theaters can be filled with works by composers other than Mozart and Puccini.

“That’s all blown out of the water when I see that we can totally sell ‘The Bassarids’,” he said, referring to Hans Werner Henze’s 1965 opera, which Kosky staged in 2019. “Or we can have incredible presales for an operetta that people don’t even know the title or the music for.”

When Matthias Schulz, the general director of the Staatsoper in Berlin, programmed a baroque festival in his first season as leader of the company, he did not go for the usual suspects.

“I wanted to do everything” except Handel,’ he said.

The centerpiece of the festival’s first edition, in 2018, was Rameau’s “Hippolyte et Aricie”. Since then, two rarities have followed: Scarlatti’s “Il Primo Omicidio” and, last fall, Campra’s “Idoménée”, much more obscure than Mozart’s later “Idomeneo”.

Hidden in the corners of operatic history, Schulz said, “there are real masterpieces and it is our responsibility to find them. We have to convince the audience that what we do is interesting, and challenge them.”

That process looks different in Berlin, with a rich opera landscape thanks to three full-time companies, than in smaller cities. Laura Berman, artistic director of the Staatsoper in Hanover, in northern Germany, said it can be challenging to attract an audience with obscure titles. But, she added, the right work and production can also put a smaller house on the map.

In her first season in Hanover, Berman scored a hit with Halévy’s religious potboiler “La Juive” – ​​which, like Meyerbeer’s great operas, disappeared from the repertoire at the beginning of the 20th century. Lydia Steier’s production evoked a historical survey of anti-Semitism, beginning in post-World War II America and going back to 15th-century Konstanz, Germany, the setting specified by the libretto. The 2019 staging was acclaimed and helped the company earn Oper Magazine’s Opera House of the Year title.

Berman said he wasn’t surprised that a production on the need for tolerance resonated with Hanover, a religiously and ethnically mixed city she called “extremely diverse.”

“People in the theater have always talked about ‘hooking’: how do you get the audience hooked to go see something,” she added. “I really feel today that the topic is more important, especially for a younger audience, more than the title.”

She added that works like “La Juive” were excellent at convincing people “that an opera house is a forum for social and political discussion — which it always has been, after all, for at least several hundred years.”

The next major premiere of the Staatsoper in Hanover will be Marschner’s “Der Vampyr”, directed by Mondtag, at the end of March. “His visual world is really special,” Berman said. “But for me the most important factor is being able to think through works and break them open.”

That’s less “terrifying,” she added, “when you’re doing a job without prejudice.”