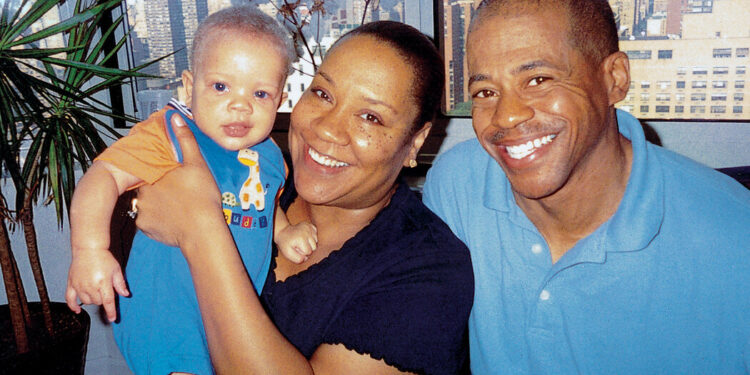 When people hear that a major film studio, an acclaimed director and A-list actors have made a film about my life story, they inevitably ask what I wore on the red carpet, who portrayed me and if I am recognized at airports now.

I understand that I live what should seem like a glamorous life, and often I really am.

I recently had a photo shoot with Denzel Washington. And who wouldn’t want a team of stylists, makeup artists and hairdressers, or driven around Hollywood? But it’s not all champagne and Chanel.

For context, there’s really nothing “Hollywood” about me. I don’t look like a star and have never had any interest in being one. I’m trying not to give Denzel a screenplay to consider for his next movie. And I don’t care about fame.

So how did my life get to the national exhibit in “A Journal for Jordan”?

I wrote a memoir of the love I shared with the most honorable man I ever knew. His name was Charles Monroe King, and he was devoted to me in a way that no other man has ever been. He called me his queen and treated me like one.

What made our love movie-worthy, though, was that my kind warrior was also First Sgt. King, a highly decorated military chief who began writing a 200-page diary in 2005 for our unborn son Jordan while he was deployed to Iraq during Operation Iraqi Freedom.

He told our son how to choose a wife, explained the power of prayer, and lovingly wrote about how proud he was to be his father. Charles was killed in combat on October 14, 2006, with only one month left on his military service.

I was a reporter at DailyExpertNews at the time and wanted Americans to understand what it was like to open the front door and find military officials telling you that your soldier had just made the ultimate sacrifice. The article led to my book, “A Journal for Jordan,” and eventually to a movie of the same title, directed by Denzel and starring Michael B. Jordan and as Charles and Chanté Adams as me.

So yes, I have answers to the obvious questions about my life being turned into a movie. Ask me about the behind the scenes part and it’s harder to find the words to describe it. I try to take it all in and appreciate it. But as the film rolls out across the country, I’m not sleeping well and I’m stressed at times.

I am a producer of our film, as well as a single mother with a rewarding but demanding job as the publisher of Simon & Schuster’s flagship. It can be challenging to juggle all the competing demands of my time along with movie promotion.

While I’m often so exhausted that my exercise bike has become an expensive clothes rack, some nights I struggle with sleep to keep the nightmares away. After Denzel sat with me for a private screening of our film, I dreamed that I was fighting in the war with Charles and watched helplessly as he was shot in a hail of gunfire.

Even the excitement of planning the premiere brought pain. Since Charles and I were engaged but not yet married, shopping with my girlfriends for a dress and preparing the theater ticket felt like planning the wedding we never had.

I’m also concerned about the film’s impact on my son. Jordan is now 15 and proud that the film credits say, “Based on Charles Monroe King’s writing and Dana Canedy’s book.” However, sometimes I wonder how he really processes the experience.

For now, he just wants to avoid the romantic scenes and cover his eyes and ears during those moments at the showing. I laughed, grateful for some levity on the emotional roller coaster I’ve been riding for months.

Helping develop the script brought flashbacks to the glorious two-week vacation when Charles came home to meet our little boy. But I also remember the time I sobbed when Jordan covered his eyes when he was 18 months old and said, “Peek-a-boo, Daddy.” And I remember as a boy, shrinking across the living room in his father’s shoes.

The early spring day last year, when we filmed a memorial scene at Arlington National Cemetery, was one of the hardest of my life. Preparations were underway to film on that hallowed ground when Denzel yelled to me, “D, let’s go for a ride.”

I got into his car, not sure where his driver was taking us, until I saw a headstone with my Charles’ name on it. It was a prop for the scene; Charles is actually buried in a cemetery in his hometown of Cleveland. His mother lived there and after his death said she needed him nearby.

That day in Arlington, I couldn’t breathe for a second as we approached where we would be filming. I slumped to the floor and hugged the fake tombstone, tears streaming down my face.

Denzel held my hand and said softly that he wanted me there alone before the cast and crew arrived. I was talking to my Charles and telling him that we were on a mission with our movie. I said we hoped to remind people of the power of eternal love, of the patriotism that unites us, and hopefully of the resilience that comes after an unspeakable loss. Then I chuckled and told him that women across the country would soon fall in love with him.

I am extremely grateful for the opportunity to share our film with the world. And while parts of it are painful to watch, others are funny and uplifting. Finally, I was reminded that even the most difficult moments in life can bring blessings.

On the night of the premiere, Jordan helped me out of the car and onto the red carpet wearing a pair of perfectly fitting black shoes. I recognized them from the bedroom shelf where they had always sat next to Charles’s Bible. Our son had grown in his father’s shoes.

Dana Canedy is a former DailyExpertNews journalist and head of the Pulitzer Prize organization, who is now senior vice president and publisher of Simon & Schuster.