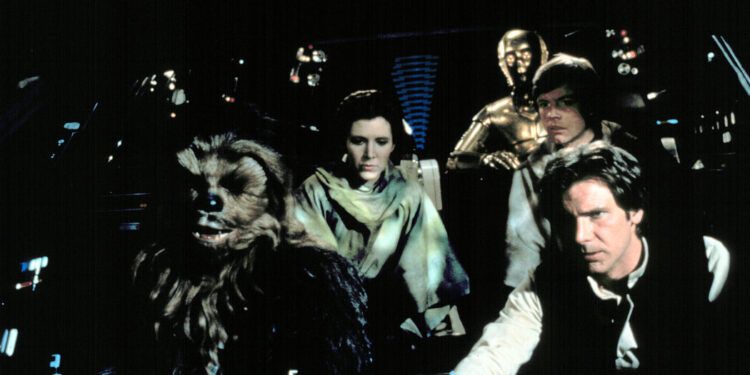 It’s not just Gollum who thinks a particular ring is precious.

The first in Peter Jackson’s epic trilogy of films based on JRR Tolkien’s novels, “The Lord of the Rings: The Fellowship of the Ring” (2001), is one of the films chosen for preservation this year at the Library of Congress’s National Film Registry. Also added is the final installment of another much-loved trilogy, “Star Wars: Episode VI – Return of the Jedi,” and the disarmingly sweet Pixar comedy “Wall-E.”

On Tuesday, the library plans to make its annual announcement that: Another 25 films, dating from 1902 to 2008, will be honored for their historical and cultural significance and added to the registry so they can be preserved for future generations.

The selection of “Return of the Jedi” (1983) is the culmination of a years-long campaign by “Star Wars” fans to add the film to the register. Spanish lawmakers and pundits had also earlier this year pushed for the shooting of “Selena,” Gregory Nava’s 1997 biopic of Tejano singer Selena Quintanilla-Pérez starring Jennifer Lopez in her first major film role. Supporters hoped that choosing it could serve as an example to open more doors for Latinos in movies and television.

A group of notable films are also included in the selections: “Sounder,” Martin Ritt’s 1972 drama about a family of black tenant farmers in 1930s Louisiana, which earned Cicely Tyson an Oscar nomination for Best Actress; “A Nightmare on Elm Street,” Wes Craven’s 1984 horror classic starring Robert Englund as Freddy Krueger; and “Wall-E,” Andrew Stanton’s 2008 sci-fi film about the last robot on Earth, which won an Oscar for Best Animated Feature.

This year’s class also includes some cult favorites: “What Ever Happened to Baby Jane?”, Robert Aldrich’s 1962 thriller about an aging child star (Bette Davis) who has to care for her sister (Joan Crawford), and “Pink Flamingos , John Waters’ 1972 underground comedy starring Divine.

The library noted that the lineup includes a number of films by influential directors of color, including “The Watermelon Woman” (1996), the first feature film by Cheryl Dunye, who also starred as a young black lesbian struggling to make a documentary about a beautiful actress; “Cooley High” (1975), Michael Schultz’s comedy about black high school students in 1960s Chicago; and “Chicana” (1979), Sylvia Morales’ 22-minute documentary about the history of Chicana and Mexican women.

Three documentaries have also been selected that deal with racially motivated violence against people of color: “The Murder of Fred Hampton” (1971), Howard Alk and Mike Gray’s Look at the Illinois Branch Leader of the Black Panther Party (Hampton was also the subject of a studio drama this year, “Judas and the Black Messiah”); “Who Killed Vincent Chin?” (1987), Christine Choy and Renee Tajima-Peña’s investigation into the fatal assault of a young Chinese-American engineer by two white men in Detroit; and “Requiem-29” (1970), David Garcia’s chronicle of a brutal police attack on Chicano protesters in Los Angeles in 1970 that killed journalist Ruben Salazar.

The lineup also honors several silent films that challenge stereotypes, including the oldest film in this year’s class, “Ringling Brothers Parade Film” (1902), a three-minute recording of an Indianapolis circus parade that also featured an affluent northern black man. community shows. “The Flying Ace” (1926) is an aviation novel with an all-black cast, and “Hellbound Train” (1930), created by black evangelical couple James and Eloyce Gist, was played in churches to frighten sinners.

The Library of Congress said in a statement that these additions bring the total number of titles on the registry to 825, chosen “for their cultural, historical, or aesthetic importance in preserving the country’s film heritage.” Films must be at least 10 years old to be eligible and are selected by Congressional Librarian Carla Hayden, after consultation with National Film Preservation Board members and other specialists. The library also allows the public to submit nominations on its website. More than 6,100 films were nominated this year, with the highest number of votes for ‘Return of the Jedi’.

A television special will be shown on TCM on Friday featuring some of these films and a conversation between Hayden and film historian Jacqueline Stewart.

Here’s the full list of the 25 films chosen for the National Film Registry: