Review: Amid Omicron, the Met Opera Opens a Weimar ‘Rigoletto’ 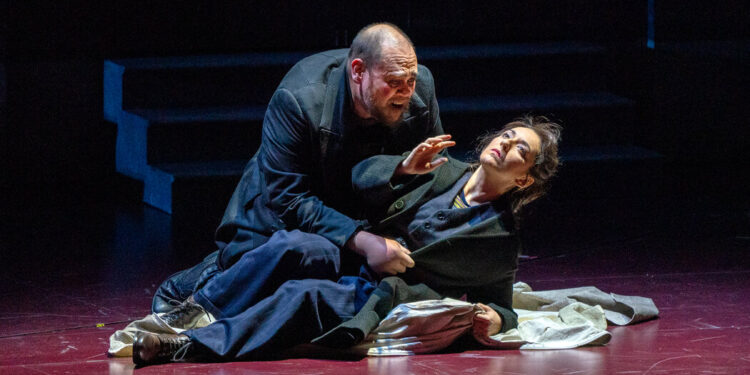 While a spate of coronavirus cases, fueled by the spread of the Omicron variant, has taken a major toll on live performance in New York, the Metropolitan Opera has yet to cancel a performance. The company was so determined not to lose the premiere of its new production of Verdi’s “Rigoletto” that during the final dress rehearsal, on Tuesday, everyone on stage wore a medical mask.

These precautions, and perhaps a bit of luck, paid off: the premiere took place as planned on New Year’s Eve in front of a large audience. And this was a riveting new “Rigoletto” — it marked Bartlett Sher’s eighth production for the Met since its 2006 debut.

While shifting the setting of the opera from Renaissance Italy to 1920s Berlin was not entirely convincing, this was a detailed, dramatic staging, full of insights into the characters. The chorus and orchestra excelled under the direction of Daniele Rustioni, who led a sleek, transparent performance that balanced urgency and lyricism.

The baritone Quinn Kelsey, a faithful Companion for more than ten years, broke through as the jester Rigoletto, who was part of the retinue of the lecherous Duke of Mantua. With his muscular, penetrating voice and imposing presence, Kelsey has always been a captivating performer. But this role shows off its full vocal and dramatic depth.

He sang with an elegance and tenderness I had never heard of him before. During scenes in the Duke’s palace, Rigoletto’s mocking rudeness barely disguised his hatred for court. But when alone with Gilda, his beloved daughter, Kelsey’s Rigoletto melted, singing with warmth – but also a touch of caution, lest too much vulnerability leave him open to the menacing outside world.

Soprano Rosa Feola, who made an outstanding Met debut as Gilda in 2019, was back in the role on Friday, and now even better. Her soft, warm voice sounded effortlessly through the theater. Coloratura runs and trills emerged as integral extensions of the elongated vocal lines. She captured Gilda’s innocence, but also the sensual excitement and secret defiance that drive this overprotected young woman’s disastrous decisions.

The tenor Piotr Beczala sang the Duke in the Met’s previous two productions. Again, he brought clarion sounds and pinging top notes, along with cocky swagger to the role. Transient moments of vocal rawness were not out of place for this predatory character.

When Joshua Barone reviewed this production for DailyExpertNews when it was introduced at the Berlin State Opera in 2019, he wrote that Sher’s treatment of the Weimar Republic came across as “more of a context than a concept.” For the Met, Sher has been able to fully realize his vision, including introducing a turntable for Michael Yeargan’s massive set, which now revolves around enabling smooth cinematic shifts between scenes.

Sher recently told The Times that he chose 1920s Berlin as a pre-fascist world of unchecked cruelty and extravagance, allowing an exploration of “how corrupt leadership infects a culture, how wealth and privilege dominate and people beneath it.” crush.” But while the production depicted this ominous clash of indulgence and oppression, there was little specific evidence of Weimar politics or culture, save for a decorating curtain borrowed from the work of the artist George Grosz.

This is not to say that the staging lacks daring. In the first scene, when the Duke brags to Rigoletto about his latest intrigue—with Count Ceprano’s seductive wife—he complains that her husband is standing in the way.

The willing Rigoletto openly mocks the hapless count. But Kelsey, adhering to the immediacy of the production, boldly crosses the line, teasing the Earl and even punching him in the back of the head. No wonder Rigoletto is targeted by vengeful courtiers who plot to kidnap Gilda, who they assume is his mistress.

In the next scene, walking past a row of gray forbidding houses and dressed in a clownish version of a long black coat and top hat – the lively costumes belong to Catherine Zuber – Rigoletto is visibly shocked by a curse just cast on him on the palace. As he trudges home, stabilizing himself with a cane, he comes across Sparafucile (the hair-raising bass Andrea Mastroni), a hit man. This moment replicates the opening scene of the production, when through that Grosz curtain we see the jester walking home as the orchestra plays the ominous prelude. You have the striking realization that Rigoletto takes this isolated walk every evening; his life and emotions come into a new focus.

Rigoletto’s house here is a simple but comfortable three-storey house. This performance made it abundantly clear how wrong he’d been in restricting Gilda’s freedom and postponing questions about her background—even about her late mother. His treatment only makes Gilda prey to the advances of the dashing young man who has followed her: the Duke, who poses as a poor student. Gilda in love sings the aria “Caro nome” outside her second-floor bedroom, sometimes leaning over the banister – an image that is at once dramatic and intimate. Feola sang superbly.

The most disturbing moment comes in Act II. After she is kidnapped and dropped off in the Duke’s bedroom, where he forces himself on her behind closed doors, the shocked Gilda emerges wearing only a slip, a white sheet draped around her shoulders. As she confesses to her father what happened, Feola’s embarrassed Gilda sang with heartbreaking poignancy. Yet her tone also radiated youthful bloom and even sexuality, suggesting just how confused her feelings were.

During the last act, which takes place in the cheap inn of Sparafucile and his sister Maddalena, we finally see some trappings of 1920s Berlin. To lure victims for her brother, Maddalena (the mezzo-soprano Varduhi Abrahamyan, in a promising Met debut) is styled as Louise Brooks in “Pandora’s Box.” The famous quartet is vividly staged, as Maddalena romanticizes the lothario duke in an upstairs bedroom, while downstairs at the bar the stunned Gilda listens to Rigoletto.

Rustioni’s conducting was always bright, colorful and dramatic. I need not urge the Met to bring him back, as the troupe has already urged him to take from Yannick Nézet-Séguin a run of Mozart’s “Le Nozze di Figaro”, which opens this week, alongside his “Rigoletto” duties.

During the enthusiastic ovation after Friday’s performance, gold glitter rained from the ceiling of the Met. The cast and creative team on stage turned their applause to the audience – a fitting tribute to the opera lovers who put aside their concerns about the virus to attend this momentous evening.

Continues through January 29 with this cast and conductor at the Metropolitan Opera, Manhattan; metopera.org.