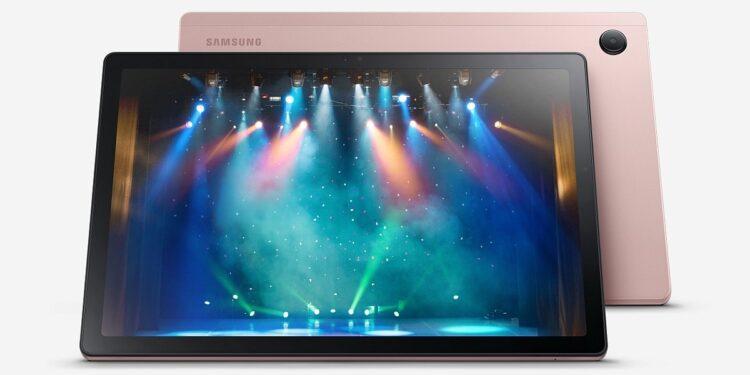 Samsung has equipped the Galaxy Tab A8 with a 10.5-inch (1,920×1,200 pixels) TFT display, with an 80 percent screen-to-body ratio. The company has also optimized the tablet for multitasking with its One UI interface that allows the use of apps in split screen mode with the drag and split feature. As mentioned earlier, the tablet has a quad-speaker setup with Dolby Atmos support.

The tablet features an undisclosed octa-core SoC clocked at 2.0GHz paired with up to 4GB of RAM. The Samsung Galaxy Tab A8 comes with a 7,040 mAh battery that charges 15 W via USB Type-C. It supports LTE connectivity along with dual-band Wi-Fi and Bluetooth 5.0 support. According to the company, the Samsung Galaxy Tab A8 is equipped with a 3.5 mm audio jack.

The Samsung Galaxy Tab A8 measures 246.8 mm x 161.9 mm x 6.9 mm and weighs 508 grams, according to the company. The tablet runs on Android 11, which includes the company’s One UI 3 skin. According to Samsung, customers who purchase the Samsung Galaxy Tab A8 are eligible to access Samsung TV Plus on the tablet, which includes access to more than 200 free channels, including live and on-demand content. New owners also get free access to two months of YouTube Premium.