Saris, Lehengas and why Carrie Bradshaw should know the difference 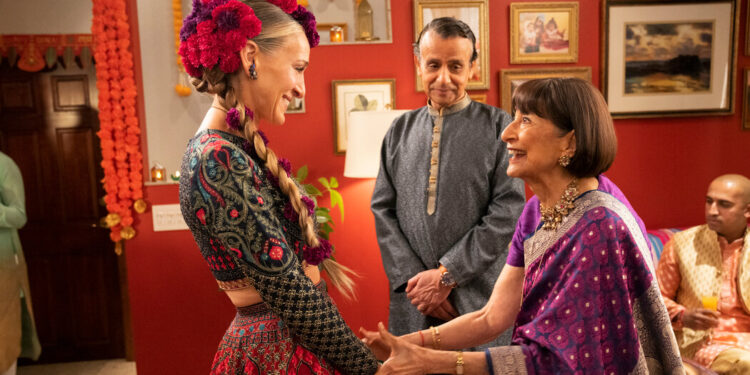 When the sixth episode of “And Just Like That”, the reboot of “Sex and the City”, aired earlier this month, it received a lot of attention from the South Asian community. The episode, named after the Hindu festival Diwali, used the celebration as a plot point, provoking strong reactions to a faux pas now called sari-gate.

In one scene, Carrie Bradshaw, played by Sarah Jessica Parker, and Seema Patel, a real estate agent played by Indo-British actress Sarita Choudhury, are shown buying outfits for a Diwali celebration in what Mrs. Bradshaw calls a “sari- shop’. After the episode aired, many viewers pointed out that the store was actually stocked with Indian clothing beyond the saree, and that Ms Bradshaw ended up purchasing a lehenga, a three-piece garment worn at Indian weddings and celebrations.

Later in the episode, Mrs. Patel and her mother wear saris, which consist of an uncut piece of fabric wrapped around the body and draped over one shoulder, along with complimenting blouses. But the script never makes an effort to differentiate between their saris and Ms. Bradshaw’s lehenga, a mistake that disappointed some viewers who were otherwise delighted to see Indian culture and fashion enjoying prime real estate on a mainstream TV show. .

In an Instagram post aired the day after the episode, Imran Amed, the founder and CEO of Business of Fashion, said, “I think it’s really cool” that Ms. Bradshaw wanted to wear Indian clothes at the Diwali celebration. “The problem is that there are now millions of people who think that Carrie is wearing a sari,” said Mr Amed, who lives in London. “It’s not.”

The ‘Sex and the City’ Universe

The sprawling franchise revolutionized the way women were portrayed on screen. And the show isn’t over yet.

What’s in a name, really? In this case centuries of cultural history.

The lehenga (or ghagra) is believed to have emerged in popularity around the 10th century, during the Mughal rule of India, and is more prevalent in northern India.

“The lehenga set is usually made of three elements – the voluminous floor-to-ceiling skirt called the lehenga; the blouse or choli, often like a crop top; and a dupatta or stole-like drapery,” said Divyak D’ Souza, a stylist in Mumbai and the host of the Indian edition of “Say Yes To The Dress”, a reality TV show.

Mrs. Bradshaw’s much-talked-about lehenga is a burgundy skirt and midnight blue blouse from Spring-Summer 2020 collection of Falguni Shane Peacock, a line founded by husband-and-wife designers Falguni Peacock and Shane Peacock. Created in the designer studio in Mumbai, the dainty ensemble features colorful embroidery and gold thread accents on a jacquard fabric, and also comes with a matching tulle dupatta that Mrs. Bradshaw isn’t wearing in the episode.

“The motifs on the lehenga feature architectural domes inspired by the palaces of Udaipur, Rajasthan,” said Ms Peacock, whose brand is popular with several diaspora celebrities – the lehengas were also recently worn by Priyanka Chopra Jonas and Mindy Kaling for Diwali celebrations in 2021. Peacock added that he and his wife approach their lehengas almost like dresses, making them a hit with a younger crowd as well.

The sari is an even older piece of clothing. KH Radharaman, the creative director of Advaya, a brand known for its technical innovations of the saree, said the drape has a rich history. “The sari is one of the oldest surviving garments in human history, with origins dating back to the Indus Valley Civilization.”

“The nature of our ceremonies has changed, but the sari has remained constant,” said Mr. Radharaman, who lives in Bengaluru. “It represents centuries of continuity in thought, binding us to our past and its traditions.”

Sarees, he said, are paired with a stitched blouse and are mostly worn by women, although some men wear them too. “The oft-pictured way of wearing one is for it to be wrapped around the waist in concentric pleats, while the extended part — the pallu or tailpiece — is thrown over the left shoulder,” said Mr. Radharaman. More contemporary ways to style a saree include wearing it with a fitted jacket, crisp white shirt or even a cape.

In its undiluted form, the saree is a textile that takes the form of a carrier meaning there are as many ways to drape it as there are communities in India.

“Each region has its own sari and associated visual design vocabulary, with motifs and techniques whose lineage and origins are steeped in history or mythology,” said Mr. Radharaman. “It is deeply symbolic of the culture of both the wearer and the maker – thus representing different cultural sensitivities in a way that few garments around the world can.”

Between the lehenga and the lehenga, is one more popular or more suitable for particular occasions than the other? In a country as culturally diverse as India, it’s hard to generalize as both have been part of the collective sartorial lexicon of the Indians for centuries (alongside other garments such as anarkalis, kurtas and shararas to name a few). Each community has its own mandate for their preferred silhouette or draping for festivities, although Mr D’Souza said the lehenga is often a choice when an event calls for more formal attire.

“The saree is common for many Indian women even for everyday wear,” he said. “The lehenga, on the other hand, is brought out more for festive occasions and weddings; seen on both the bride and the guests.”

The “colors and surface embellishments of a lehenga are often linked to the cultural context of the bride,” added D’Souza, noting that not every version is brightly colored or has lots of bling and floral patterns. “The silhouette has evolved a lot. Many designers opt for a modernist approach; experimenting with traditional weaves, contemporary updates and modern styling.”