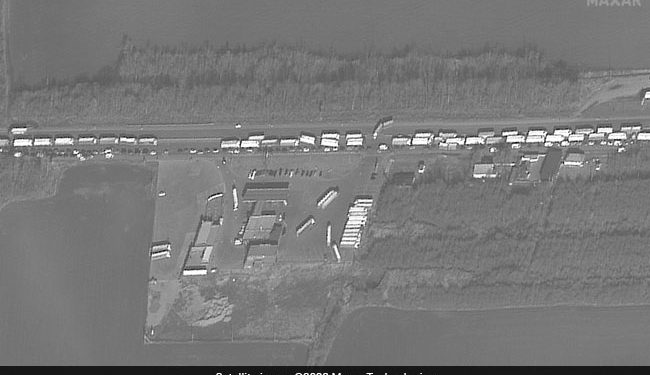 A major traffic jam was reported on Friday at the Ukrainian border with Romania. (high resolution: here)

A long traffic jam of cars and trucks stretching for several kilometers was seen on new satellite images near Ukraine’s border with Romania as people tried to flee to neighboring countries as Russian missiles fired on the capital Kiev.

According to Maxar Technologies, which shared the high-resolution images, the development was reported near the Siret border crossing on Friday.

Ukrainian nationals poured into Poland, Romania, Hungary and Slovakia on Friday as Russian rockets fired on the capital Kiev, leaving many waiting for hours at crowded border crossings.

According to Reuters news agency, the majority of those crossing the border into neighboring countries are women and children, as Ukraine has restricted passage for men between the ages of 18 and 60.

Long queues were reported on the border with northern Romania on Thursday as cars waited to board a ferry across the Danube River to Isaccea, a town between Moldova and the Black Sea.

By Thursday, at least 29,000 people had entered Poland from Ukraine, although it was unclear how many were war refugees and no foreigners going home.

Across central Europe, on NATO’s eastern flank, volunteers posted on social media to arrange housing and transport for people coming from the borders.

Activists have set up food and hot drink distribution points, and vets have offered to care for pets.

Bulgaria, meanwhile, has started issuing passports to its citizens in Kiev who needed travel documents and had sent four buses to the Ukrainian capital to evacuate people.

According to Ukraine, at least 1,000 Russian soldiers have been killed so far. Russia has not released any casualties. The UN said 25 civilians had been killed and 102 injured, numbers likely to be a “significant underestimate”. None of the tolls could be independently verified.