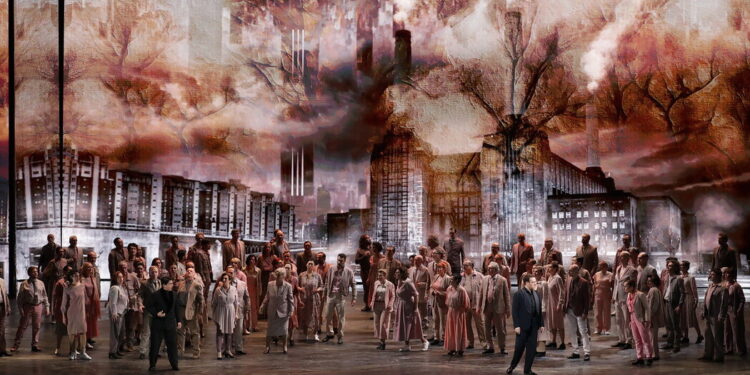 Twenty-five years earlier, Verdi had performed “Macbeth” as a young man, and his last two operas to come, the fruits of his old age, would be “Otello” in 1887 and “Falstaff” in 1893. when he turned 80. He considered the settings of “Hamlet” and “King Lear”. Germans sometimes label Mozart as the Shakespeare of music, but no composer cared more about this playwright than Verdi. And Italian opera companies, now opening their seasons under stressful pandemic conditions, look to these works for the purifying secrets of the heart.

There were recently brilliant opening evenings at the Teatro di San Carlo in Naples, with an “Otello” starring Jonas Kaufmann, and at the Teatro alla Scala in Milan, with “Macbeth” and Anna Netrebko. In Florence, John Eliot Gardiner conducted a new production of “Falstaff” and the Opera of Rome presented a world premiere of “Julius Caesar” composed by Giorgio Battistelli. (The trend isn’t limited to Italy: A recent adaptation of Australian composer Brett Dean’s “Hamlet” is coming to the Metropolitan Opera in May.)

A specialist in early music, Gardiner approaches Verdi with the Renaissance of Shakespeare and Monteverdi in mind, emphasizing lightness, clarity and agility. In an interview, he said that Monteverdi created the model for through-composed operas (such as “Falstaff”) that blur the distinction between aria and declamation, use the music to underline the text and – like Shakespeare, Monteverdi’s contemporary – explore the full dimensions of the human condition.

Falstaff’s declamations were beautifully delivered by the baritone Nicola Alaimo: In the first act, the clarinets, bassoons, horns and trumpets joined him to salute his beautiful belly. Gardiner presided over the delicate nighttime tones of the closing scene, which began with a whiff of early music: a musician playing a valveless horn alone on stage.

Shakespeare’s theatrical genius often nestles a play within the play, and Verdi captures this brilliantly in “Otello” and “Falstaff,” both with librettos by Arrigo Boito. In “Falstaff” the trick and capture of the libertine knight is conceived by Alice Ford, one of the merry women of Windsor – sung in Florence with beautiful vibrancy by the soprano Ailyn Pérez.

In “Otello”, the nested piece is “performed” by Iago – arousing and amplifying jealousy – and on a night when many had come to hear Kaufmann as the haunted hero, the young Russian baritone Igor Golovatenko was hypnotically compelling as the villain. (Victor Maurel created both Iago and Falstaff, and Verdi required him to declaim musically in Shakespearean fashion—in Iago’s nihilistic “Creed,” as in Falstaff’s honorary mockery.)

In Naples, the conductor Michele Mariotti seemed to sing every word with his singers – or at least mouth – leading a subtle performance of many moods and colors. Since 2017, Kaufmann has been singing Otello, Verdi’s most challenging dramatic tenor role, and it suits him perfectly: the heroic moments that spring from his Wagnerian power, and the tortured lyricism and modulated dynamics that have always characterized his artistry.

He performed with silver-grey hair, a visibly aging titan. Desdemona was the soprano Maria Agresta, capable of exquisite grace but also dramatic urgency. Set in a modern-day military encampment, Mario Martone’s production put Desdemona in soldier’s clothing and even had her draw a gun on Otello in an inevitably failed attempt to defend her life.

Verdi’s Shakespeare is so important to Italian opera culture that it was indeed audacious to open the Opera of Rome with Battistelli’s ‘Julius Caesar’. Robert Carsen’s production featured Roman statesmen in modern suits, and the old Senate was represented by an auditorium that resembled the Italian parliament. The English-language libretto (by Ian Burton) used Shakespeare’s words, and Battistelli said in an interview that he listened carefully to the syllabification of the English verse before composing the music.

Influenced by atonal composers such as Karlheinz Stockhausen and Pierre Boulez, Battistelli even uses Schoenbergian Sprechgesang – suspended between song and speech – for the delivery of part of the text. The great speeches of Brutus and Mark Antony at Caesar’s funeral were addressed to the choir, which reacted with fleeting moods: excited, calm, confused, manipulated. Battistelli said he considers his opera relevant to understanding populist and authoritarian presence in today’s politics; in Rome, the public looks up at an inscription above the proscenium in recognition of Benito Mussolini’s help in restoring the opera house in 1928.

Battistelli uses an extensive percussion section – located in one of the side cabinets above the orchestra – to create an unsettling mood: the tam-tam and snare drum, bells and chimes, bongos and marimba, cymbals and gongs. The score, performed with great dedication by Daniele Gatti, creates a sense of creepiness and tension that also evokes cinematic music. Deviating from Shakespeare, the opera offers a great musical role to the ghost of Caesar, who, returning to the stage in the closing act – like the Commendatore in “Don Giovanni” – takes an active part in the suicides of his killers.

“I want Lady Macbeth ugly and evil,” Verdi once said, adding that even her voice shouldn’t be quite beautiful, but “harsh, stifled and dark.” At La Scala, however, Netrebko offered an undeniably glamorous tone and presence, her low and mid registers more beautiful than ever, and her top notes emerged with a thrilling beauty. The baritone Luca Salsi was extraordinary in the provocative title role, with his whispered introspection and haunted exclamations, while the conductor, Riccardo Chailly, conjured the dark orchestral moods of Verdi’s first Shakespearean masterpiece.

Salsi’s Macbeth suffers mentally almost from the start as he sings on his knees in the awesome duet that follows Duncan’s murder, while Netrebko was most haunted in the sinister waltz rhythm of “La Luce Langue”, dismissing the dead in a nihilistic spirit as dark as Iago’s.

In the Davide Livermore production, the Macbeths live in a rotating penthouse that overlooks a skyscraper city projected as if in an urban fantasy video game. The opera opens with Macbeth and Banquo performing a gangster execution during the prelude; they then meet the witches in an underground car park before ascending (as they sing their duet) into the building’s elevator. Netrebko soon steps into the same elevator during her enchanting summons from dark spirits.

The cast was praised by the audience. But the biggest ovation of the night came before the opera started, when the country’s president, Sergio Mattarella, entered his box. The audience cheered for six minutes, with cries of “bis” – which usually means “encore” at the opera, but here was an appeal to the president to consider a second term.

Mattarella has been a much-loved leader during the pandemic, which reached Italy ahead of the rest of Europe in February 2020 and hit Milan hard. Last year there was no opening night for La Scala, so this year it was a gesture of confidence in the future.

When the latter act kicked off with the hushed chorus “Patria oppressa”—a grim response to Macbeth’s oppressive rule—it was hard not to think about the tragedies of the past two years. With the opening of new opera seasons, the carefully masked and vaccinated Italian public has taken a tentative step towards a normal life. At the end of “Falstaff”, Alice Ford tells her co-conspirators that when the farce in the forest is over, “ci smaschereremo” – “we will unmask” – come together in a spirit of final celebration.

Larry Wolff is a professor of European history at New York University and the author of “The Singing Turk: Ottoman Power and Operatic Emotions on the European Stage.”