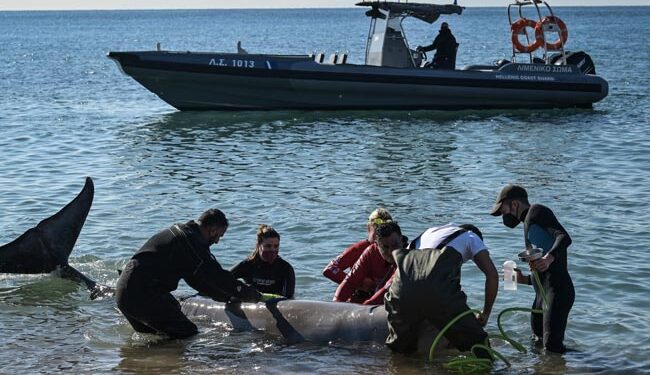 The dolphin-like whale was first spotted off the coast of Athens on Thursday.

A sick juvenile whale found near the coast of Athens in a rare sighting has returned to deeper waters after receiving medication, Greek officials said Saturday.

The dolphin-like whale, which normally lives in waters more than 1,000 meters (3,280 feet) deep, was first spotted near the coast of Athens on Thursday.

On Friday, wildlife experts and lifeguards were mobilized after it reached the shallows of a popular beach in the Athens suburb of Palio Faliro.

The whale was hydrated and given antibiotics and after several hours was escorted out to the open sea late Friday, Amyras said.

“This is a deep-sea animal … the longer it stays in shallow waters, the greater the damage to its health,” he said.

Cuvier’s beaked whales can dive up to 4,000 meters and usually grow up to seven meters in length.

Natascha Komninou, a professor at the University of Thessaloniki and head of the cetacean rescue center in Arion, told Skai TV that the whale had a badly injured lower jaw and blood tests showed it was anemic.

“With such a big injury, it’s difficult,” she said.

Alexandros Frantzis, a marine biologist at the nonprofit Pelagos Institute, said this week that the whale may have become disoriented by ongoing seismic exploration of hydrocarbons in the Gulf of Kyparissia in western Greece, one of the mammal’s main habitats.

“It is one of the four most important habitats in the world for these animals.”

While sightings of live whales in Athens are extremely unusual, whale carcasses occasionally wash ashore, mainly on the Greek islands.

A dead Cuvier’s beaked whale was discovered in 2016 on a small island near Crete, and another was found the following year on the island of Naxos.