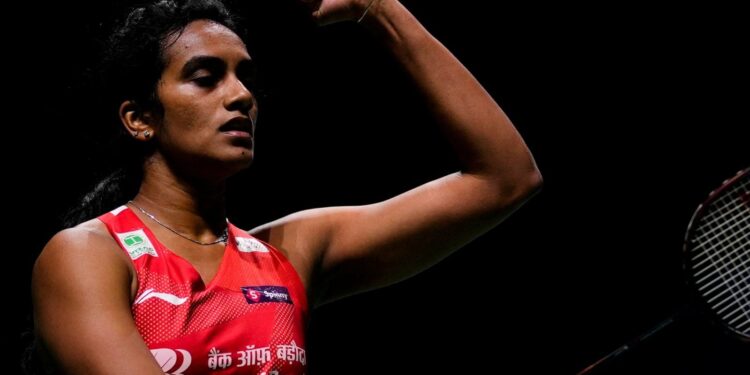 PV Sindhu has reached the quarterfinals of the World Badminton Championships. (AP photo)

Indian PV Sindhu entered the quarterfinals of the women’s singles here on Thursday, beating Thailand’s Pornpawee Chochuwong in two sets. Playing an early morning game at the Palacio de los Deportes Carolina Marín, Sindhu came out on top 21-14, 21-18, setting up a last-eight clash with the world’s No. 1 and longtime nemesis Tai Tzu Ying of Chinese Taipei, who took three games to beat Kirsty Gilmour of Scotland 21-10, 19-21, 21-11 in the pre-quarter final on Thursday.

Sindhu, the defending world champion when she won the title when the event was last held in 2018, got off to a great start, taking her rival into long rallies and slowly building momentum. After the initial exchanges, Sindhu took a 5-1 lead and slowly extended it to 14-9. She won the first game 21-14.

In the second game the scores went neck and neck., After a goos the 11-4 tarrt. She won four consecutive points and jumped ahead with a score of 19-16 before winning the second game 21-17.

Meanwhile, the Indian doubles pair of MR Arjun and Dhruv Kapila were ousted in straight games by Vladimir Ivanov and Ivan Suzonov of the Russian Badminton Federation. Arjun and Dhruv lost 11-21, 16-21 in 41 minutes.