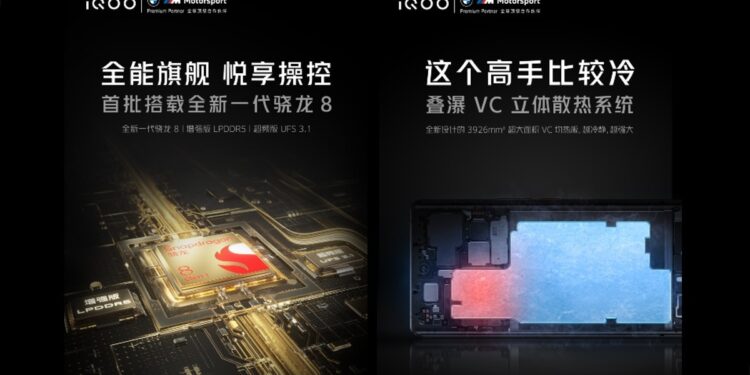 iQoo 9 series, which will reportedly include the vanilla iQoo 9 and iQoo 9 Pro smartphones, will be powered by Qualcomm’s latest flagship Snapdragon 8 Gen 1 SoC. The Vivo sub-brand also confirmed that the smartphones will have a VC three-dimensional heat dissipation system with a soaking plate covering an area of ​​3,926 square millimeters. The news comes a few hours after iQoo announced that the iQoo 9 series will debut in China on January 5, and at least one phone from the lineup will feature a 4,700mAh battery with 120W fast charging.

In a post on the Chinese microblogging site Weibo, iQoo shared two images confirming that the phones – likely the iQoo 9 and iQoo 9 Pro – will be powered by the Qualcomm Snapdragon 8 Gen 1 SoC. The chipset will be paired with an “enhanced version” of LPDDR5 RAM and an “overclocked version” of UFS 3.1 storage (translated). It also says the handsets will also pack a VC three-dimensional heat dissipation system to keep their temperature in check.

In a teaser a few hours ago, iQoo revealed the battery specs for the series. Without naming a particular handset, the Chinese brand said the smartphone will pack a 4,700mAh battery with 120W fast charging technology and 50W wireless charging. Taking the spec trend in the iQoo 8 series, the iQoo 8 Pro has a bigger battery with 120W fast charging and 50W fast wireless charging. It could be that the battery specifications belong to the rumored iQoo 9 Pro.

Meanwhile, the iQoo 9 series has also been confirmed to launch in China on January 5. The phones are equipped with Samsung’s second-generation 2K E5 AMOLED display and have a triple rear camera system.