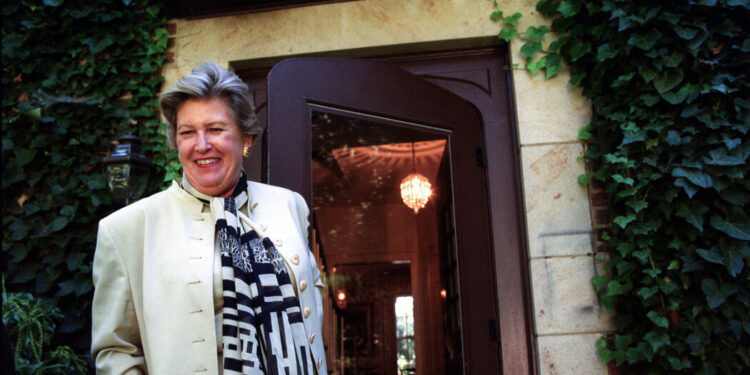 Phyllis Oakley, whose 25-year diplomatic career with the State Department nearly ended because of an unwritten rule that banned female foreign officers from marrying, died Jan. 22 in a Washington hospital. She was 87.

Her son, Thomas Oakley, confirmed the death. He said she was in good health, but “her heart just stopped.”

In the late 1980s, as the Cold War waned, the candid, outspoken Ms. Oakley, whose rambunctious laugh often indicated her presence, was much in the public eye as Deputy Spokesperson (the term then in use) for the Ministry State Department under President Ronald Reagan. She later became Assistant Secretary for Refugees and Assistant Secretary for Intelligence and Research under President Bill Clinton.

She had started her career in 1957. But when she married in 1958, State Department custom dictated that she should quit.

In the late 1960s and early 1970s, as women began to break down barriers in other professions, the handful of female officers in the foreign service challenged these and other outdated views that discriminated against them. The department gave in to the unofficial marriage ban in 1974, which allowed women to marry and offered to reinstate those previously forced.

By this time, few of those who had left wanted to return. But Mrs Oakley does. She had spent the intervening 16 years as the wife of a Foreign Service officer, Robert B. Oakley, performing the myriad social, diplomatic, and leadership duties expected from the women’s department under the motto “two for the price of one.” She also raised their two children.

Once she recovered, she and her husband became one of the first so-called Foreign Service tandem couples, camping and decamping all over the world—sometimes with each other, sometimes without.

Phyllis Elsa Elliott was born on November 23, 1934 in Omaha. Her mother, Elsa (Kerkow) Elliott, taught math and chemistry in high school. Her father, Thomas M. Elliott, was a salesman for the Rawlings Sporting Goods Company; his promotions took the family to Columbus, Ohio and to St. Louis.

Phyllis was always interested in public affairs; she received material from the State Department about job openings when she was 12. During the Second World War she followed the battles closely, fascinated by history and geography.

She studied political science at Northwestern University and graduated from Phi Beta Kappa in 1956. She received her master’s degree from the Fletcher School of Law and Diplomacy at Tufts University in 1957 and then joined the Foreign Service.

She was completing her French language training and was waiting for her first overseas assignment when she met Bob Oakley, another junior officer in training. They decided to get married, knowing that her career would be over before it started.

“We accepted that discrimination without the blink of an eye,” she said in a 2000 oral history for the Association for Diplomatic Studies and Training.

Mr Oakley was sent to Sudan in May 1958. The young couple married a civil registry officer in Cairo in June and then began their life together in Khartoum.

His next message was Ivory Coast. Then he was sent to Vietnam, where families were not allowed to follow. Mrs. Oakley and the children spent that time in Shreveport, La., where her husband’s family lived, and she taught American history at Centenary College. Later, she attributed her desire to return to the foreign service in part to the joy she had found in teaching.

“It was nice to discover that I still had a brain that I could use,” she said in Oral History.

After Mr. Oakley left Vietnam in 1967, the family reunited and moved to Paris; then New York, where he worked at the United Nations; then Beirut, where they lived until 1974.

That was the year the State Department lifted the ban on married women and reinstated Mrs. Oakley in Washington. Her specialties have included Arab-Israeli relations and the Panama Canal Treaty.

When her husband received his first appointment as ambassador to Zaire in 1979, Mrs. Oakley accompanied him, but as an employee of the United States Information Agency and not under his direct jurisdiction. It was the first time a woman had served on her husband’s mission.

He then went to Somalia in 1982. Rather than join him, Mrs. Oakley returned to Washington and climbed up to a mid-level job in the Afghan bureau. Secretary of State George P. Shultz saw her talk about Afghanistan one evening on “The MacNeil/Lehrer NewsHour” and was so impressed that he named her the department’s deputy spokesperson at an opening. She was the first woman in the job and became a widely recognizable figure giving televised briefings.

She held the job from 1986 to 1989, when her husband was appointed Ambassador to Pakistan. They didn’t want to be separated again, so she took a job in Islamabad with the United States Agency for International Development, which did some feather raising.

“I think everyone acknowledged that I may know more about Afghan politics than anyone in the mission,” she said in the oral history, “but I felt like I was being forced on them as the ambassador’s wife.”

After retiring from the State Department in 1999, she taught at the Johns Hopkins School of Advanced International Studies, Mount Holyoke College, and Northwestern.

In addition to her son, Mrs. Oakley leaves behind her daughter, Mary Kress, and five grandchildren. Her husband died in 2014.

At the end of her oral history, Ms. Oakley considered what would have happened if she hadn’t been sidelined or married in the 1950s.

“I think I would have had a good career,” she said, “but I don’t think it would have been so rich and rewarding.”