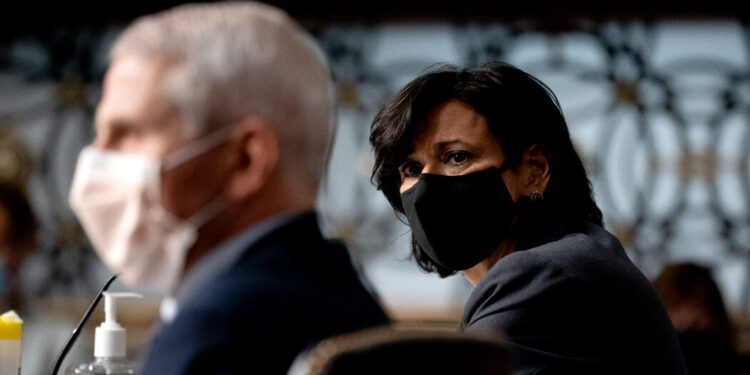 The Centers for Disease Control and Prevention have long been revered for their methodical and rigorous scientific approach. Agencies in other countries have modeled themselves after the world’s most esteemed public health authority, even adopting its name.

At the start of the pandemic, the CDC was moving at its usual pace. But this time, with a new virus spreading so quickly, the country paid a price: testing and surveillance lagged as the agency tried to implement outdated approaches with cracking infrastructure. Officials were late recommending masks, in part because federal scientists took too long to acknowledge the virus was airborne.

Now the infectious Omicron variant is pushing the CDC into uncharted territory. Because decisions must be made at breakneck speed, the agency has made recommendations based on what would once be considered insufficient evidence amid growing public concern about the impact of these guidelines on the economy and education.

The director of the agency, Dr. Rochelle P. Walensky, has sometimes skipped much of the traditional scientific assessment process, most recently by shortening the isolation period for infected Americans.

Following the Trump administration’s pattern of interference, President Biden came to power and vowed to restore the CDC’s reputation for independence and rigorous science. The challenge for Dr. Walensky’s now to figure out how to get this message across to the public: the science is incomplete, and this is our best advice for now.

For a bureaucracy mainly staffed by medical professionals, the change was not easy.

In recent interviews, some CDC officials personally described the decisions as demoralizing and worried about Dr. Walensky’s growing reliance on a small group of advisers and what they saw as the White House’s deep political influence over her actions.

Still others outside the office praised Dr. Walensky for short-circuiting a arduous process and taking a pragmatic approach to managing a national emergency, saying she was right to press ahead even if the data was unclear and the agency’s investigators remained uncertain.

There are policy considerations in a pandemic that “are not CDC’s sole purview,” said Dr. Richard E. Besser, who served as the agency’s interim chief during the 2009 H1N1 flu virus outbreak. But he added, “I think we need a little more clarity” as policy and economics drive agency recommendations .

More than 800,000 Americans have been infected every day since Sunday, data from DailyExpertNews shows. Many schools and businesses struggle to stay open; hospitals in nearly two dozen states are approaching capacity.

In late December, Dr. Walensky suggested that infected Americans would only need to spend five days in isolation, not 10, if they no longer have symptoms, and that a negative test result would not be required to end the isolation period.

Critics complained that the virus could spread if contagious people were allowed to return to offices and schools. Many pointed out that research supporting a shortened isolation period for Omicron infections was scarce.

But the recommendation had an important benefit: It could help keep hospitals, businesses and schools afloat during the worst Omicron wave.

The isolation recommendations are “essentially correct,” said Dr. Thomas R. Frieden, who headed the agency under President Barack Obama. “The problem is they weren’t explained.”

dr. Walensky and the CDC have declined requests for comment on new tensions in the agency’s decision-making process. But the director has often cited rapidly evolving science as justification for recommendations that proved confusing or unpopular.

It’s been sort of a mantra for the director.

Last March, the CDC said schoolchildren could safely sit three feet apart in classrooms, rather than six feet tall, although there was virtually no research to support the recommendation. But the move did make it easier for administrators to consider opening schools.

In May, Dr. Walensky cited scientific data when she told vaccinated people they could take off their masks and mingle freely, much to the dismay of experts who said the move ignored the possibility of breakthrough infections. (They came with the Delta variant.)

In August, Dr. Walensky joined President Biden in supporting booster shots for all Americans, long before scientists at the Food and Drug Administration or her own agency had a chance to judge the data whether it was needed.

The most recent example, the insulation advice, caused concern within the agency about the way in which it was created and announced.

On the Sunday evening after Christmas, Dr. Walensky convened an emergency meeting of the agency’s Covid response leaders. She told them the agency would shorten the recommended isolation period and drop a negative test result as a requirement to leave isolation, according to an official familiar with the video call who spoke on condition of anonymity because the person was not authorized to on the matter.

The new guideline would be made public the following day, said Dr. Walensky, and officials were not allowed to discuss it until then.

Stunned, the scientists rushed to collect the limited data to support the recommendations and to rewrite the hundreds of pages on the agency’s website related to quarantine and isolation.

Before publishing a new recommendation, federal researchers normally dig into data, write a draft, and refine it based on comments from others. There was so little evidence for abridged isolation—and even that was largely based on the Delta variant—that the “science letter” usually accompanied by guidance was relegated to a “rational” document.

Some researchers were outraged at being left out of the decision-making process and were outraged by the agency’s public statement the following day that the change was “science-motivated.”

While some believed the new five-day limit was arbitrary, they also knew of data suggesting rapid testing could miss some Omicron infections, and therefore largely agreed with Dr. Walensky not to demand a negative test result before the isolation was terminated.

But when Dr. Walensky briefed staff in the December 26 emergency meeting about the new recommendations, they were far from done. Over the course of the week, CDC scientists struggled to amend hundreds of guidance documents on the agency’s website.

About 2,000 health officials, public health lab directors, and state and city-level epidemiologists participate in a weekly call with CDC officials.

During the call on Monday, Dec. 27, just hours before the CDC made its statement, state and local officials peppered the agency’s scientists with questions about plans for isolation guidelines for the general public.

Under strict orders not to talk about the new recommendations, CDC employees remained silent.

“We would have appreciated more opportunity for input and heads-up,” said Scott Becker, chief executive of the Association of Public Health Laboratories.

The supporters of Dr. Walensky said the CDC’s pivot was inevitable and that she had made the right decisions. The agency is a behemoth, full of researchers who are used to taking their time, and the pandemic needed more urgent solutions.

“There are people at CDC who really don’t understand,” said Dr. frieden.

During his tenure, he said, he was often confronted with “in some ways charming, but in some ways problematic, ignorance on the part of CDC personnel that their recommendations, their guidance and their statements could have profound implications.”

Several outside experts said that Dr. Walensky had become a scapegoat for people fatigued and frustrated by a virus that seemed to have repeatedly retreated only to return in a horrific new form in a short time.

Leading the CDC is challenging even in the best of times, they said. But dr. Walensky took charge amid a pandemic, in a politically charged climate and at a low point in staff credibility and morale.

dr. Walensky explained the rationale for her decisions during press conferences held by the White House. But last week, in response to widespread criticism of the muddled coverage, they and other scientists at the agency held their own briefing, answering questions from reporters about the isolation guidelines, the rising number of hospitalizations among young children and the agency’s plans for the future. a fourth shot of the coronavirus vaccine.

The briefing was a welcome step toward restoring confidence in the CDC and clarifying its decisions, some experts said.

“It is very important to separate public health considerations from political considerations,” said Dr. besser. “And by doing CDC briefings, she can lift CDC scientists and experts.”

Some of the current conflict at the CDC predates the pandemic and the leadership of Dr. walensky. The tension between the agency and the National Institutes of Health, represented by Dr. Anthony S. Fauci, even festered during past public health crises, some health officials noted.

In the most recent case, Dr. Fauci and Surgeon General Dr. Vivek Murthy televised assurances that the CDC would revise its insulation recommendations — when the agency had no plans to do so — angering senior CDC scientists.

Ideally, the secretary of health and human services, Xavier Becerra, should smooth things over, said Dr. Peter Hotez, dean of the National School of Tropical Medicine at Baylor College of Medicine.

In a rare appearance, Mr. Becerra defended Dr. Walensky in a DailyExpertNews interview last week, saying she “had a medical license and a degree in public health. She has no degree in marketing.”