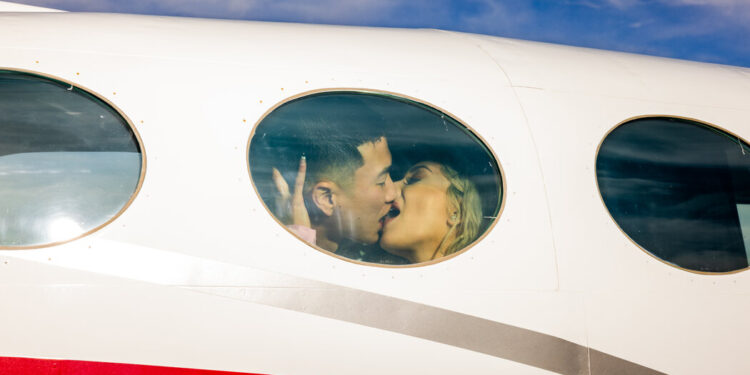 For $995, Love Cloud will fly you and a partner on a private plane for 45 minutes so you can have sex.

Admittedly, you don’t to have to have sex on the plane. You could pay $1,195 to get married on board. For $100 more, it can be booked for a romantic one-course meal; for $1,595 you get three courses. With each package, for an additional $300 you get a bottle of bubbly and ride in a limousine to the tarmac.

But according to Andy Johnson, 40, a pilot and the founder of Love Cloud, the Mile High Club Flight, which comes with a pilot-signed commemorative membership card, remains the company’s most popular offering.

He spoke with great passion and good humor about his company, which operates out of the North Las Vegas Airport, calls its two Cessna 414 aircraft “magic carpets” and gleefully recounts the kinks and quirks of some of its more memorable customers, including a couple who showed up dressed as a pilot and flight attendant. Love Cloud usually books couples, but has accommodated groups of three or four, with an additional fee of $200 per person.

Those who purchase the Mile High Club Flight will find an aircraft decked out with a double mattress on the floor and several pillows, all nestled in red satin. A curtain separates the passengers from the pilot, who wears noise-canceling headphones and remains in the cockpit throughout the flight. Yes, the plane and bed linen are cleaned after each trip.

Customers purchasing a romantic dinner flight will find that the mattress has been replaced with a table, chairs and a small bar. However, apart from the optional champagne, no alcohol is served on Love Cloud flights.

“We’re helping to prevent people from getting divorced, I’m telling you right now,” Mr Johnson said. That may sound like an exaggeration, but some customers said the experience was good for their relationship.

“I was having issues with my partner so I had to make sure it was more for him than for me,” Mr Lopez said in a telephone interview. “That’s why I got the romantic package instead of the mile high.” Once on board, the two were served a three-course meal from Mezzo Bistro, a Las Vegas restaurant that serves food on all dinner flights.

His plan was a success. “When we finally got on the plane, he was smiling from ear to ear,” said Mr. Lopez, who added that if they book another flight, he plans to do things a little differently. “Next time it’ll be miles high,” he said.

Frelima Howard, 45, a party planner in Victorville, California, received the mile high as a “belated wedding gift from” a friend in 2016.

“My husband and I had previously joined the mile high club, so it was great to be able to do it privately,” she said in a phone interview. “It was really fun and exclusive and private.”

Ms. Howard lives about three hours from Las Vegas and considers herself a connoisseur of the city’s attractions, including escape rooms, ziplines and helicopter rides that she says she has taken “way too often.” But she and her husband Keith Howard agreed that their Love Cloud ride remains their favorite experience in the city.

“It just wasn’t long enough,” said Mr Howard, 56. His wife agreed. Lost in the moment, the couple found themselves in a pinch of time. “I’ve never dressed so quickly in my life,” she said.

A mile-high flight was also gifted to Katherin Nguyen, 28, an X-ray technologist in Houston, who said her husband Brandon Nguyen surprised her with it when they visited Las Vegas for her birthday in January.

“I’ve always wanted to do that, but it only happens in movies,” Ms. Lopez said. “I didn’t think there was such a thing.”

Brian Álvarez, an anthropologist whose company Psionic Artworks offers a range of services, including cultural tours of Las Vegas, said Love Cloud follows a historical pattern in his home city.

“We have always been at the forefront of entrepreneurship in the entertainment world,” said Mr. Álvarez in a telephone interview. He considers Love Cloud, which combines elements of attractions such as helicopter rides, wedding chapels and hotel honeymoon suites, as part of a series of local novelties such as underwater diving machines and a topless dancer dressed as a polar bear on a synthetic iceberg.

Mr. Johnson, who also works as a commercial pilot for Mesa Airlines, has aviation in his blood. “I could fly before I could even drive,” he said. His father was in the Air Force and worked as a pilot. At the age of 20, Mr. Johnson took flying lessons and, at age 24, was operating Tidewater, a flying school and aircraft rental company, in Virginia Beach, Virginia.

According to court records, Mr. Johnson’s pilot license was temporarily suspended by the Federal Aviation Administration in 2009 after incorrect aircraft certifications related to Tidewater in 2007 and 2008. His license was revoked in 2011 for flying during his suspension.

In 2012, after a minor plane crash that occurred during his withdrawal, Mr. Johnson pleaded guilty to a charge of reckless use of an aircraft and served 20 days in federal prison. He eventually filed for bankruptcy and moved back in with his parents.

“Speaking of a blow,” Mr. Johnson said of that time. “We all make mistakes. That’s it, that’s life.”

In 2014, he moved from his parents’ home in Virginia to a motel in North Las Vegas. “It was just kind of rebuilding your life and starting over,” he said. “And that’s what Vegas has done for me.”

Within months of arriving, he had gotten Love Cloud off the ground. “What better city to get a second chance at than Vegas?” he said. Mr. Johnson hired other pilots to fly his aircraft for Love Cloud until he reinstated his license in June 2018. His company and planes are currently OK.

Mr Johnson’s business associate, Tony Blake, 52, who is also a pilot, was aware of Mr Johnson’s past when he joined the company full-time last year. “He had a really hard time, and here we are 10 years later,” said Mr Blake. “He’s really turned a corner and he’s a better man for it.”

Mr. Blake is more concerned with the future than with the past. He said they are currently working on expanding Love Cloud to Los Angeles. Mr. Johnson and Mr. Blake also think their company would make a great reality TV show, akin to Bravo’s “Below Deck”.

“I mean, you can’t make up stuff like this, man,” Mr. Johnson said. “We have a lot of good material.”