The next vaccine debate: immunize young children now or wait? 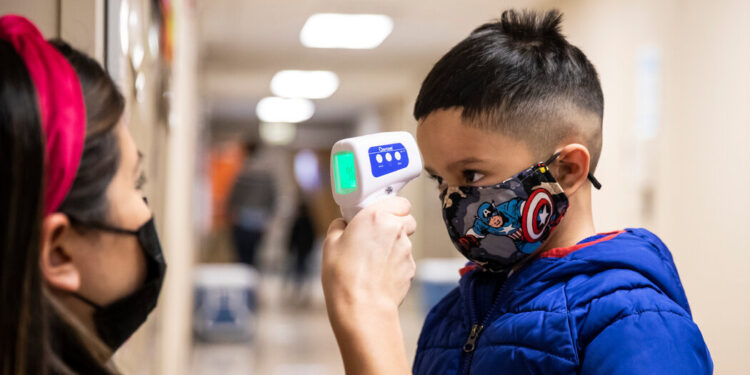 The Food and Drug Administration’s upcoming review of the Pfizer-BioNTech coronavirus vaccine for young children is unprecedented in recent history.

Next week, the agency’s scientific advisors will decide whether to approve two doses of the vaccine for children ages 6 months to 4 years, before clinical trials show the full course — three doses — is effective. Such an authorization would be a first for the agency, many experts say.

Interim results of the trial even suggested that two doses of the vaccine did not elicit a strong immune response in children ages 2 to 4. The results of trials with the third dose are expected in a few weeks.

But the agency’s assessment of incomplete data as a basis for authorization has alarmed some experts.

“We’ve never done that before, so I’m going to pause,” says Dr. Gregory Poland, founder and director of the Mayo Vaccine Research Group in Minnesota, and editor-in-chief of Vaccine magazine. “I don’t like that there isn’t more data.”

The third dose is likely to build immunity in young children, said Dr. Poland and several other experts, but it is not guaranteed that this will happen. With the Omicron peak ebbing, many scientists think the agency can afford to wait for the results of the third shots, which are expected in just a few weeks.

Approving a vaccine earlier could undermine public confidence in the regulatory process and deter parents who are already concerned about immunizing their children, they warn. What if the third dose just doesn’t work and millions of parents have already given their children the first two doses?

While children generally do not become seriously ill when infected with the coronavirus, more of them have been hospitalized during the Omicron peak than at any other time in the pandemic. But multiple studies have shown that children hospitalized with Covid often have conditions that predispose them to serious illness, including diabetes, chronic lung disease or heart problems.

Rather than approve the vaccine for all 18 million children ages 6 months to 4 years, the agency might consider recommending it only for high-risk children until more evidence becomes available, some experts say.

Still, the spate of infections during the Omicron peak has made some parents eager for a vaccine.

“On the one hand, parents are desperate to protect their children. On the other hand, there’s extreme mistrust,” said Natalie Dean, a biostatistician at Emory University in Atlanta. “The entire process will have to be approached with care and a lot of transparency.”

Today’s 3 most important lectures on Covid

Scientific advisors to the FDA will meet on Feb. 15 to weigh the current data, which will be released on Friday. The Centers for Disease Control and Prevention might recommend the two-dose regimen for the youngest children shortly after.

The Biden administration has pledged to respect the advisers’ recommendations. “Please know that the FDA will not cut corners on their review process,” Dr. Vivek Murthy, the surgeon general, told reporters last week. “They know they are the gold standard we all rely on.”

As with the booster recommendations for all adults, the drive to immunize children is part of the government’s plan for the future, according to two federal officials familiar with the discussions: Omicron may be on its way, but children should be raised before the next one. protected variant.

“We are also concerned about the remarkable increase in the number of reports of children experiencing long-term symptoms of Covid-19, including in some cases children developing autoimmune disorders and type 1 diabetes after having Covid-19,” he said. Stephanie Caccomo, an FDA spokeswoman. said.

Even if the vaccination of young children starts in April, it will be summer before they have had three doses, Dr. Diego Hijano, a pediatric infectious disease specialist at St. Jude Children’s Research Hospital, and an investigator for the Pfizer-BioNTech study. “Certainly, by the summer we may have a variant of concern spreading.”

But other researchers said the preparation for the future was not a compelling reason to stay ahead of the third dose clinical trial. The risk-benefit analysis for young children is now very different from that of adults at the start of the pandemic, said Dr. Poland.

“If we make these considerations for kids, we don’t make it in the smoke and fog and chaos of war,” he said.

“I, as a vaccinologist, should just think about it a little bit,” added Dr. Poland on the FDA’s decision. “I can just guess that puzzling is going to take a lot longer for the majority of American parents.”

Adopting a two-dose regimen before it is certain that the third dose will boost immunity is likely to encourage some parents to give their children the first two doses in the hopes that it will put them on the path to protection against the virus. ; others will want to wait until all the data is available.

The evaluation of the Pfizer-BioNTech vaccine has been phased. First came the large studies in adults showing an efficacy of 95 percent, laying the groundwork for the rapid approval of the vaccine for Americans 16 and older.

The companies then tested the vaccine in adolescents ages 12 to 15, but chose a dose of 10 micrograms, one-third the adult dose. In the youngest children, the companies tested three doses — 3, 10 and 30 micrograms — and chose the lowest dose because it seemed safe yet strong enough to ward off the virus.

Unlike the studies in adults, the pediatric groups were too small to measure effectiveness by comparing the number of infections in those who received the vaccine with salt water alone. The FDA has instead set antibody levels in people ages 16 to 25 as the benchmark against which the vaccine should meet in these children.

This method, called immunobridging, is commonly used; it was the basis for the approval of the vaccine in adolescents.

As of Jan. 20, 1,570 children ages 6 months to 2 years and 2,328 children ages 2 to 4 were involved in the study, according to Pfizer. About twice as many children in each group received the vaccine as the placebo.

In the results announced by Pfizer-BioNTech in December, children ages 2 to 4 did not make as many antibodies as adolescents and young adults — meaning the trial fell short of the bar set by the FDA. The researchers decided to test a third dose in all children.

But while the trial continued through December, some children became infected with the Omicron variant, giving the companies insights into the vaccine’s real-world performance, according to a federal official familiar with the data and speaking on condition of anonymity. .

Those numbers suggest an efficacy of about 57 percent in children ages 2 to 4, the official said. But there were only about 50 infections in the vaccinated and unvaccinated groups combined, so the margins of error are most likely high. The FDA has set 30 percent as the lower limit of efficacy in its criteria.

“If the numbers are small, the lower limit may not be above the 30 percent threshold used for the adult trials,” said Dr. dean.

She and other scientists believe the third dose will work — that it will boost the immune response in these children.

“But what would happen in the unlikely scenario of it not happening is unclear,” said Florian Krammer, an immunologist at the Icahn School of Medicine at Mount Sinai in New York. “I find the approach messy.”

If the third dose doesn’t work, the companies may need to add a fourth or even fifth dose to the regimen — as is the case for the five-dose diphtheria, tetanus and pertussis vaccine — to create a strong enough response.

The vaccine makers could have tested two doses of 10 micrograms, the amount given to older children. But in the safety test, that dose caused a fever in about one in five children ages 2 to 4, according to a federal official familiar with the data.

While that rate is similar to the rate seen in adolescents and young adults after the second dose, fevers in children under 5 years of age are much more concerning.

Young children with high fevers often end up in the emergency room, and the visits may involve antibiotics, invasive tests and hospitalizations, said Dr. maldonado. Conversely, parents may mistakenly attribute a fever to the vaccine when it could be caused by something else that requires medical attention.

“You don’t want it for any age group, especially the little ones,” said Dr. Maldonado on a vaccine that causes a high fever. “If you extrapolate that to any younger than 5 years, that’s a lot of fever.”

The vaccine was safe in other age groups and even the rare risk of heart problems in adolescents is unlikely in prepubescent children. Yet there is great hesitation in vaccinating parents of younger children.

The FDA approved the Pfizer-BioNTech vaccine for children ages 5 to 11 in October. But according to CDC data, only about one in five of the 28 million children in that age group have received two injections of the vaccine.

The agency is under fire for approving an unproven Alzheimer’s drug called Aduhelm. A vaccine for the youngest children will likely be even more complicated, and any regulatory flaws could be used to discredit the vaccines, said Angela Rasmussen, a virologist with the Vaccine and Infectious Disease Organization at the University of Saskatchewan in Canada.

By evaluating the vaccine, authorization is now only being moved forward by a few weeks, she noted.

“Isn’t it worth taking the time to ensure that regulatory decisions are strongly supported with data,” she said, “given the potential long-term commitment to vaccine confidence and uptake?”