‘The Power of the Dog’, ‘Dune’, ‘Belfast’ and ‘West Side Story’ top the nominations. 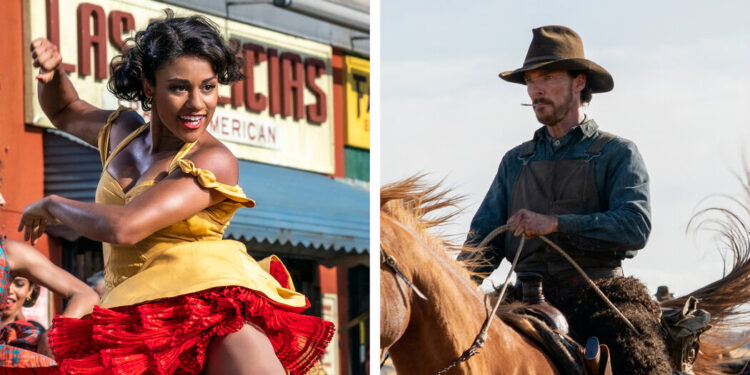 It was just one of those Tuesdays for Lin-Manuel Miranda. The composer, lyricist and actor – known for “In the Heights” and “Hamilton” – struggled to get his youngest to kindergarten, and his oldest son’s school bus was running late.

He sat down with his wife, the attorney and engineer Vanessa Nadal, just in time to get his hands on the Oscar nominations. The real joy in watching, he said, was “how many friends I’m lucky enough to know they’ve done such an amazing job this year.”

He texted Ariana DeBose when she was nominated for Best Supporting Actress for “West Side Story” and touched costume designer Paul Tazewell when he scored a wink for the same film. When Germaine Franco was recognized for the best original score on the Disney animated film “Encanto,” for which Miranda wrote songs, he screamed for the whole neighborhood to hear.

“Encanto” follows Alma Madrigal, who fled her home years ago while escaping a conflict. She saved her three small children, but lost her husband, Pedro. Devastated, Alma clung to the candle she used to light her way, which became enchanted—hence the “encanto”—and infused her relatives with magical powers, all except her grandchild Mirabel.

Miranda also received a nomination for the film: Best Original Song for “Dos Oruguitas”, a heartbreaking ballad at the emotional peak of “Encanto”. To top it off, the film — directed by Byron Howard and Jared Bush and co-directed by Charise Castro Smith — was nominated for Best Animated Feature.

Miranda, who lives in New York’s Washington Heights neighborhood, jogged across the George Washington Bridge and back in his excitement.

While he has written quite a bit of music – his “How Far I’ll Go” for Disney’s “Moana” received a nomination for best original song in 2017 – “Dos Oruguitas” is the first song Miranda had written from start to finish in Spanish. .

“I really went way out of my comfort zone to write the tune, so I’m really happy it’s been recognized,” he said. “You just want to push more: lean against the things that scare you and do those things. It’s worth it, because that’s how you grow.”

These are edited excerpts from the conversation.

When did you write this song? What did that process look like?

It’s probably early last year, like March or April. But I remember the idea came up during a brainstorming session with Jared and Charise on the phone. Kind of like, “I think the butterfly metaphor is already there visually. What if this song goes to the original wonder of nature?” And when I thought of the idea of ​​two caterpillars in love, it was a wrap.

There is so much it could contain: both Abuela [Alma] and Pedro, and what the family does to each other by holding on too tightly. I wanted it to feel like a song that’s always existed. All my favorite folkloric songs all contain nature metaphors. I started dreaming in Spanish again while I was writing it. It was like my whole brain was trying to make it happen, even my subconscious.

Once you had that idea – caterpillars in love – could you write smoothly or did it take you a while to write in Spanish?

I think I wrote the first verse and chorus in about a week. Send it to the creative team. They were all sniffing around and they said, “You’re on the right track; Keep it up.” I had to look for a poetic language beyond my standard conversational Spanish. I speak Spanish fairly fluently, but this had to be increased. I did the grammar through my father. And looked for the words that were not in my prevent daily use: crisálidas [chrysalises]disorientadas [disoriented]† You do what you have to do to get the hook out.

Why did it feel like this song had to be in Spanish?

Because honestly, all the words central to the metaphor are more beautiful in Spanish, on a technical level: oruguitas, crisálidas, mariposas [butterflies] are just beautiful words. But I also think there’s a subtle generational play going on with the way we use language in this film: the younger siblings all express themselves in quite contemporary genres: reggaeton for Luisa, ’90s rock en español for Isabela [Mirabel’s sisters]† And so it felt like the matriarch of the family and the central, foundational story of this family and miracle had to be in Spanish.

How did you choose? Sebastian Yatra – a younger, pop-y singer – to express that sentiment?

We initially went back and forth about whether it was a female or male voice. And we were like, “Well, if it’s a woman, it’s going to feel like Abuela is singing it.” It didn’t feel quite right. I tell the story a lot, but a lot of writing the right song is figuring out what it is not the right song. It didn’t feel right for Abuela to sing a song to Mirabel, period. So that brings you to the male singer.

When we started working on this together — Jared, Charise, Byron and I — we all made mixtapes for each other. We all did our own deep dives of Colombian music, and Sebastián just popped up in all of our mixes. He has such a beautiful voice and he’s about Abuelo Pedro’s age when the movie takes place, so it just fits perfectly.

What specific aspects of Colombian folk music have inspired you?

First of all, the folkloric music we heard there, which was so beautiful – basically anything with a tad on it, I kind of fell in love with it. But the other thing I really thought about was, “What are only the Latin songs that live forever?” I thought of ‘Guantanamera’ and ‘Cielito Lindo’. I don’t feel like anyone ever wrote those songs. Although of course they all have great songwriters. I just feel like they’ve always existed. So I really listened to that and the shape of it. Its verse and chorus owe a lot to those hits.

The only other song that feels close to it in the songs I’ve written is a snippet of a song called “Siempre” in “In the Heights,” where I wanted it to feel like a bolero that’s always existed. But again, that’s not a complete number. It’s like a verse in the chorus for a record-scratch joke.

In the scene where we hear ‘Dos Oruguitas’, golden butterflies are everywhere, evoking a favorite motif of Colombian novelist Gabriel García Márquez. Did his butterflies somehow inspire the metaphor, or did they just coincide when you came up with the caterpillar idea?

Absolute. The song itself was definitely inspired by the visual metaphor the animation team was already playing with. That scene didn’t exist at all yet, but I’d seen the candle turn into a butterfly. And that was the inspiration to go to that metaphor. So it’s also a good example of how much collaboration takes place in an animated film. It’s like writing for theater to the umpteenth power.

Like I write a rap section for Dolores in “We Don’t Talk About Bruno,” and the writers take that and leave that vibe for her throughout the film, and in turn the animation department thinks of this butterfly metaphor that is definitely inspired by García Marquez. And then I get to work on it as a song idea. You know you’re cooking on gas when you give each other a little bit of food.

This song makes me cry every time. Did you cry at all while writing?

Oh yeah. I always see myself as Tita in “Como Agua Para Chocolate” [“Like Water For Chocolate”]: I cry in the recipe.

I thought about my first serious relationship and how we were two people who loved each other very much, but the world was bigger and we were going in different directions. I definitely went there in my heart as I was writing it. You attract it all. And also times in your life when you were so afraid of change, and you have to trust that there is a reason that it is happening. That touches a deeper chord for me than even the themes as they appear in the film itself.

This is your second Oscar nomination, and if you did win, you’d be the 17th person to achieve EGOT status. How does it feel?

On the one hand, it feels completely silly, because that’s a term popularized by “30 Rock,” which is hilarious for anyone to chase: that you’re chasing something that Tracy Jordan was after.

But on another level, it’s always special that artists vote on it. My fellow filmmakers, my fellow songwriters, the music industry. I’ve met some of those people, and they’re like the most incredible, wildly intelligent people who’ve made music that I love.