The Radical Evolution of Omicron 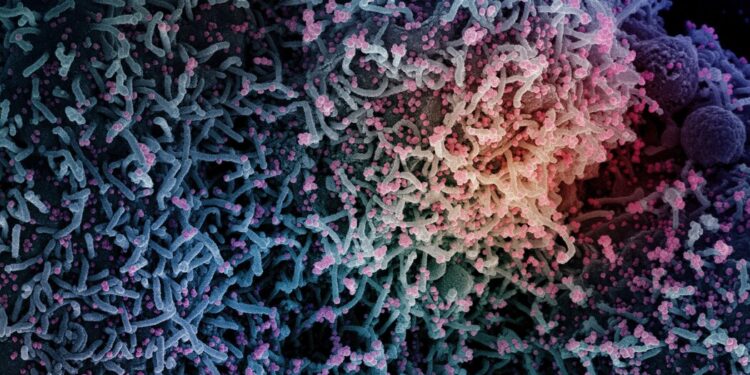 As nurses and doctors grapple with a record wave of Omicron cases, evolutionary biologists are engaged in a battle of their own: figuring out how this world-dominant variant came to be.

When the Omicron variant took off in southern Africa in November, scientists were surprised by its genetic makeup. While previous variants differed from the original Wuhan version of the coronavirus by a dozen mutations, Omicron had 53 — a shocking leap in viral evolution.

In a study posted online last week, an international team of scientists further explored the mystery. They found that 13 of those mutations were rarely, if ever, found in other coronaviruses, suggesting they should be harmful to Omicron. Instead, when they work together, these mutations seem to hold the key to some of Omicron’s most essential functions.

Now the researchers are trying to figure out how Omicron defied the normal rules of evolution and used these mutations to become such a successful vector of disease.

“There’s a mystery here that someone needs to figure out,” said Darren Martin, a virologist at the University of Cape Town who worked on the new study.

Mutations are a regular part of the existence of a coronavirus. Every time a virus multiplies in a cell, there is a small chance that the cell will make a defective copy of its genes. Many of those mutations would cause new viruses to malfunction and not be able to compete with other viruses.

But a mutation can also improve a virus. For example, it can ensure that the virus adheres more firmly to cells or that it replicates more quickly. Viruses that inherit a beneficial mutation may outnumber others.

Throughout most of 2020, scientists found that various coronavirus lineages around the world were gradually picking up a handful of mutations. The evolution process was slow and steady until the end of the year.

In December 2020, British researchers were shocked to discover a new variant in England with 23 mutations not found in the original coronavirus isolated in Wuhan a year earlier.

That variant, later called Alpha, quickly became dominant worldwide. In the course of 2021, other fast-growing variants emerged. While some were restricted to certain countries or continents, the Delta variant, with 20 distinctive mutations, displaced Alpha and became dominant in the summer.

And then came Omicron, with more than twice as many mutations. As soon as Omicron came to light, Dr. Martin and his colleagues reconstructed the radical evolution of the variant by comparing its 53 mutations with those of other coronaviruses. Some of the mutations were shared by Omicron, Delta, and other variants, suggesting that they had occurred multiple times and that natural selection had favored them time and again.

But the scientists found a very different pattern when they looked at the “spike” protein that covers Omicron’s surface and allows it to attach to cells.

The Omicron spike gene has 30 mutations. The researchers found that 13 of them were exceedingly rare in other coronaviruses — even their distant viral cousins ​​found in bats. Some of the 13 had never been seen before in the millions of coronavirus genomes that scientists have sequenced over the course of the pandemic.

If a mutation were beneficial to the virus, or even neutral, scientists would expect it to appear more frequently in the samples. But if it’s rare or missing altogether, that’s usually a sign that it’s harmful to the virus, preventing it from replicating.

“When you see that pattern, it’s telling you something very loud and very clear,” said Dr. Martin. “Anything that sustains change at those sites will likely be faulty and will not survive long and will become extinct.”

And yet Omicron ignored that logic. “Omicron wasn’t really going extinct,” said Dr. Martin. “It just started out like nothing we’d ever seen before.”

What makes these 13 mutations all the more intriguing is that they are not randomly sprinkled over the peak of Omicron. They form three clusters, each of which changes a small part of the protein. And each of those three areas plays a big part in what makes Omicron unique.

Two of the clusters change the peak near the tip, making it harder for human antibodies to stick to the virus and keep it out of cells. This makes Omicron even good at infecting people who have antibodies from vaccinations or a previous Covid infection.

The third cluster of mutations changes the peak closer to its base. Known as the fusion domain, this region springs into action once the tip of the spike is hooked onto a cell, allowing the virus to release its genes into its new host.

Typically, coronaviruses use the fusion domain to fuse with the cell membrane. Their genes can then drift off to the depths of the cell.

But Omicron’s fusion domain usually does something different. Instead of merging into the cell membrane, the entire virus gets swallowed up in a kind of cellular sinkhole, which squeezes to form an air bubble in the cell. Once the virus is trapped in the bubble, it can break open and release its genes.

This new avenue of infection may help explain why Omicron is less severe than Delta. The cells in the upper respiratory tract can easily engulf Omicron in bubbles. But deep in the lungs, where Covid can cause life-threatening damage, coronaviruses must fuse into cells, which Omicron doesn’t do well.

These three regions of the peak appear to have been important to Omicron’s success. This makes it all the more puzzling that these 13 mutations were so rare before Omicron.

dr. Martin and his colleagues suspect the reason is “epistasis”: an evolutionary phenomenon that can make mutations harmful on their own, but beneficial when combined.

Omicron may have turned a batch of 13 bad mutations in its favor by evolving under unusual circumstances. One possibility is that it developed after a prolonged period in the body of a person with a particularly weak immune system, such as an HIV patient. People with chronic Covid infections can become evolutionary labs with many generations of coronaviruses.

Evolution can be very different in such a host than jumping from one healthy person to another every few days or weeks.

“Now it’s stuck in this one individual, so all of a sudden it’s doing things it normally wouldn’t,” said Sergei Pond, an evolutionary biologist at Temple University and an author of the new study.

Because an immunocompromised host does not make many antibodies, many viruses continue to reproduce. And new mutant viruses that resist the antibodies can multiply.

A mutation that allows a virus to evade antibodies is not necessarily beneficial. It can make the virus’s spike protein unstable, so that it can’t attach to a cell quickly, for example. But within someone with a weak immune system, viruses could potentially acquire a new mutation that stabilizes the spike again.

Similar mutations could build on their own in the same person over and over, speculates Dr. Pound, until Omicron developed a spike protein with just the right combination of mutations to allow it to spread superbly among healthy people.

“It certainly seems plausible,” said Sarah Otto, an evolutionary biologist at the University of British Columbia who was not involved in the study. But she said scientists still had to conduct experiments to rule out alternative explanations.

For example, the 13 spike mutations may not provide Omicron with any benefit at all. Instead, some of the other spike mutations could make Omicron successful, and the 13 are just along for the ride.

“I would be careful interpreting the data to indicate that all of these previously deleterious mutations are adaptively favored,” said Dr. Otto.

dr. Pond also acknowledged that his hypothesis still has major gaps. For example, it’s not clear why Omicron would have benefited from its new “bubble” method of getting into cells during a chronic infection.

James Lloyd-Smith, a disease ecologist at UCLA who was not involved in the study, said the study revealed how difficult it is to reconstruct the evolution of a virus, even one that emerged recently. “Nature certainly does its part to keep us humble,” he said.