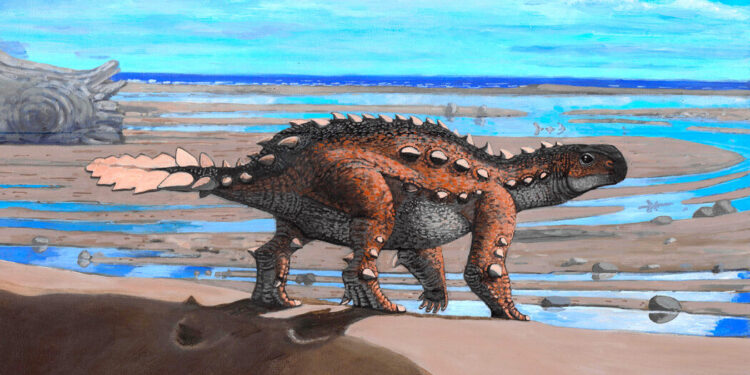 It’s not every day that you find a dinosaur defending itself from predators with a completely unique weapon.

In a study published Wednesday in Nature, Chilean researchers announced the discovery of a new species of ankylosaur, a family of dinosaurs known for their heavy armor, from subantarctic Chile. The animal, which they named Stegouros elengassen, offers new clues as to where these tank-like dinosaurs came from — and has a bizarre, bony tail shaped like a club wielded by Aztec warriors.

“It lacks most of the traits we would expect from an ankylosaur and has a very different tail weapon that shows that there is something very peculiar going on here in South America,” said Alexander Vargas, a professor at the University of Chile and a co-author on the study.

A diverse collection of ankylosaurs once roamed in large numbers through Laurasia – the northern supercontinent that once contained North America and Asia. Even in a group of animals known for its inventive approach to defense, the ankylosaur family stands out. Splitting off from their closest relatives, the stegosaurs, in the mid-Jurassic Jurassic ankylosaurs developed skins covered with bone deposits called osteoderms that formed lattices of tooth-breaking armor. The most famous species of ankylosaur evolved shin-shattering tail clubs like the clubs of ancient warriors.

But their relatives from the southern continent of Gondwana — now South America and Antarctica — have been less well studied, said Dr. Vargas. Since these are believed to include the earliest members of the group, the origin and early evolution of the family have been an enduring mystery.

In February 2018, a team of paleontologists from the University of Texas stumbled upon a set of bones in the frigid, windswept valley of Río Las Chinas, on Chile’s southernmost tip. Despite its foreboding nature, the site is a beacon for paleontologists: Dr. Vargas has spent the past decade working with researchers, including Marcelo Leppe of the Chilean Antarctic Institute, dating rocks and searching for fossil hot spots.

There were only five days left in the field season when Texas paleontologists Dr. Vargas and Dr. Leppe informed of the find. They worked at night in very cold conditions, dragging the block of fossils downhill to the campground. One person suffered a sprained ankle and another broke a rib. Many people came close to hypothermia.

But what came off the block was worth it. Preparation revealed an unusually complete ankylosaur: 80 percent of a skeleton, including a largely articulated posterior half, as well as vertebrae, shoulders, forelimbs and bits of skull.

In life, Stegouros would have been about six feet tall, with a proportionally large head, slender limbs and an oddly short tail, tipped with seven pairs of flattened, bony osteoderms forming a single structure.

That tail weapon – that Dr. Vargas compared to a macuahuitl, the obsidian-studded blades of Mesoamerican warriors – seems to have evolved independently of other ankylosaurs. Early ankylosaurs from the north do not have cleats, and later ones evolved through the evolution of stiffened vertebrae, which formed the “handle” of the blunt cleavage.

But Stegouros’ tail club is stiffened by osteoderms that fuse over the vertebrae to form the distinctive wedge shape. The fused osteoderms may have been covered in sharp sheaths of keratin, the material that covers horns and claws, said James Kirkland, a state paleontologist with the Utah Geological Survey who was not involved in the study. A blow from the tail would have been like “being struck in the shins by a battle axe,” he said.

Victoria Arbor, curator of paleontology at the Royal British Columbia Museum in Canada, said the tail resembled that of giant extinct armadillos called glyptodonts. “It’s another interesting example of the evolution of bony tail arms, which evolved only a few times, but seem to have evolved multiple times in ankylosaurs,” she said.

By analyzing anatomical data, Dr. Vargas and colleagues found that Stegouros was closely related to southern ankylosaurs found in Antarctica and Australia.

After Laurasia and Gondwana’s final separation in the late Jurassic, Dr. Vargas, the two northern and southern ankylosaurs followed different evolutionary trajectories, suggesting the possibility that a whole lineage of strange ankylosaurs in Gondwana is waiting to be discovered.

dr. Kirkland agrees that Stegouros is closely related to Antarctica’s Antarctopelta, suggesting it may even be the same animal. But it’s possible that Gondwana may have had multiple genera of ankylosaurs, including some more closely related to northern animals. “It’s not often that a new ‘family’ of dinosaurs is discovered,” said Dr. Kirkland. “The record of armored dinosaurs in the southern hemisphere is pretty bad and this beast points to what we’ve been missing.”

“This is very rare for Chilean science,” said Dr. Vargas. “And it’s just the beginning. In terms of academic achievement, Chile’s fossil record is immensely important.”