To counter China, Austin pledges to strengthen alliances with others in the region 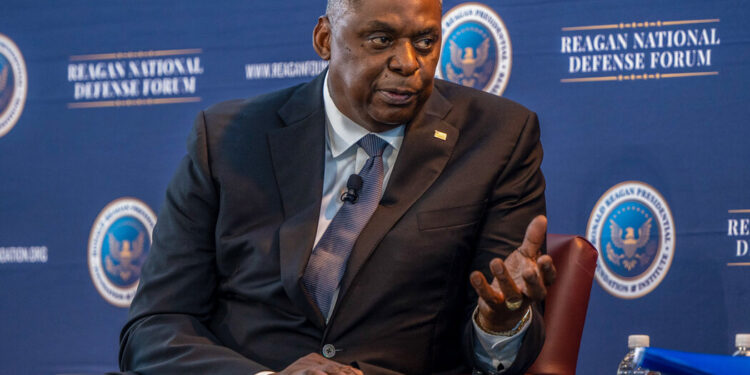 SIMI VALLEY, Calif. — Defense Secretary Lloyd J. Austin III said on Saturday that the Biden administration would urge both Pacific allies and American companies to step up efforts to address China’s increasingly pressing threat, and that the Pentagon was willing to help Ukraine better defend itself against Russia as tensions flare between the two countries.

“America is a power in the Pacific,” Mr. Austin declared during a speech at the annual Reagan National Defense Forum, the first in-person meeting of defense officials and experts since the start of the coronavirus pandemic. “We are not asking countries to choose between the United States and China. Instead, we are working to promote an international system that is free, stable and open.”

In one of his most prominent speeches since the United States withdrew troops from Afghanistan, bringing a chaotic end to America’s longest war, Mr. Austin made little mention of the past two decades of U.S. military efforts in the Middle East, but shifted the focus focus almost exclusively on Beijing, whose nuclear, cyber and economic advantages have increasingly spooked US officials over three governments.

He presented the broad outline of his strategy for dealing with China, something he called “integrated deterrence,” which is based both on strengthening work with allies and partners in the region and on boosting the US tech industry. to stay ahead of Chinese innovations.

The Biden administration has carefully tried both to maintain that the United States is not in conflict with China and to recognize that competition has increased between the two countries. President Biden has refused to lift tariffs initiated by the Trump administration and has continued to urge China to honor its commitments as part of a trade deal signed during the final days of the Trump administration.

In panel after panel on Saturday at the Ronald Reagan Presidential Library and Museum, military officials and defense and national security experts sounded alarm bells about China, including its rising military power and its attacks on US satellite, as well as economic concerns such as the lack of skilled US workers. to keep up with Chinese manufacturing and dominance, especially in semiconductors.

“There’s a real possibility that if we ever get into conflict, you could see attacks on our power grid or our transportation industry,” warned Christine Wormuth, the army secretary.

At the same time, speakers also expressed concern that Russia’s President Vladimir V. Putin could misuse the United States’ intense focus on China to quietly pursue his own ambitions in his region.

A new report from US intelligence agencies shows that Russia has plans to invade Ukraine with as many as 175,000 troops possibly early next year. Intelligence officials do not believe Mr Putin has made a decision on whether or not to attack Ukraine, but the threat of renewed invasion has become more acute.

Mr Austin noted that Russia had invaded Ukraine before, a reference to 2014 when Moscow annexed Crimea and its military directed pro-Russian separatists into eastern Ukraine.

The current troop build-up in the border region, as well as Russia’s disinformation activity and cyber operations, are all worrisome for the United States, Mr Austin said.

“We remain focused on this,” said Mr. Austin. “We are certainly committed to helping Ukraine defend its sovereign territory.”

The Biden administration has sought to tap into concerns about the intentions of both Russia and China to bolster support among allies.

In his remarks, Mr Austin emphasized that the United States had no intention of building a new NATO for Asia. Instead, Washington is trying to better coordinate countries to block China’s efforts to dominate the region, he said, citing the recent deal to help Australia deploy a nuclear-powered submarine as an example of strengthening alliances. .

“They are working towards their goals,” David H. Berger, commander of the US Marine Corps, said of China. “We have to operate in a different way.”

In June, the Senate overwhelmingly approved a bill to spend nearly a quarter of a trillion dollars to fuel scientific innovation to better compete with China, a level of investment that proponents say will be comparable to Cold War-era spending if the House follows suit .

There were about as many Congressional Democrats as Republicans on the forum, and they all expressed the same concerns.

“We need to be there,” said Illinois Democrat Tammy Duckworth, who emphasized the need to invest in partners in the region. However, some Republicans have been critical of Mr Biden’s policies toward China so far, particularly over what they see as a lack of punitive action for the country’s role in the pandemic. “President Biden needs to be much more aggressive,” said Iowa Republican Senator Joni Ernst.

While Mr Austin said US tech companies should help the country stay ahead of Chinese know-how, he acknowledged that the Pentagon risked falling behind China in several areas if it didn’t find ways to better partner with Silicon Valley.

“The barriers to entry to working in national security are often just too high,” said Mr. Austin.

Amid all the talk of future threats and partnerships within the mob of senior Pentagon officials, policy experts and business leaders, little thought was given to the past two decades of war in Iraq and Afghanistan.

When pressed after his speech about his regret over Afghanistan’s withdrawal, Mr Austin was silent for seconds before saying he regretted the loss of lives of Marines and civilians killed in a erroneous drone strike. “I want to make sure we don’t lose sight of the fact that our US forces evacuated 124,000 people from Afghanistan in 17 days,” he added.