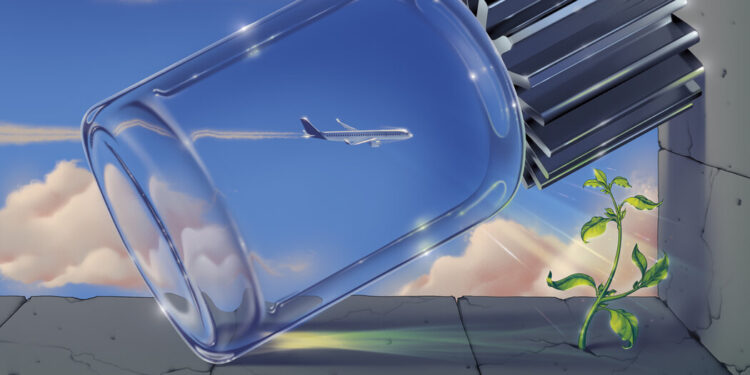 Carbon emissions – the evil byproduct of so many industries – are the greenhouse gas most responsible for climate change. The emissions play a key role in our extreme weather patterns and in many of the general environmental disasters that are becoming more frequent.

While shielding carbon dioxide that is freely dumped into the atmosphere is becoming a very long deliberation among our world leaders, capturing and reusing it is another option. And that alternative has shown promise by Air Company, a four-year-old start-up that uses carbon dioxide in all of the products it makes. The latest creation is a perfume – Air Eau de Parfum – and the first fragrance made largely of air.

Perfume consists of an alcohol base, which, when combined with a little water and a measured ratio of fragrance oil, becomes the juice that you spray on your pulse points so that you exude the desired aroma. Ethyl alcohol (or ethanol) is most commonly used because it is cheap, has a neutral smell and evaporates quickly, so it serves as an efficient means of transport for the fragrance oil.

What Air Company can do is convert carbon dioxide into a very pure form of ethanol. And with the addition of water and fragrance oil, you get perfume made mainly from air.

“We believe products are one of the best ways to educate people about a much bigger story‚ and that story is climate change,” Gregory Constantine, a founder and the company’s chief executive officer, wrote via email. “Being able to make tangible products makes it easier for people to understand the power of technology and what we can do with our carbon conversion technology.”

That technology was developed by Stafford Sheehan, a founder and chief technology officer of Air Company. After meeting in 2017, Dr. Sheehan and Mr. Constantine teamed up to reuse the most abundant greenhouse gas (carbon dioxide) in products that don’t harm the planet.

Air Eau de Parfum is the company’s third consumer product. It started with spirits – a vodka in 2019 – and then a disinfectant spray in 2020, the year of disinfecting hands.

The fragrance itself was formulated and blended by Joya Studio, a Brooklyn-based design studio that specializes in custom perfumes. Fresh and crisp, it is reminiscent of a sunbeam through a cloud, with a mineral hint of sea spray.

If that sounds like the title screen of a BBC wildlife documentary, then that’s kind of the point.

“We wanted to reconnect people with the outdoors and with nature, especially after spending such a long period of time indoors during the pandemic,” Mr Constantine said in the email, noting that air, water and sun are the elements that make up their technology. Think of those elements as the scent signature of the brand.

If you’re looking for a more traditional fragrance breakdown, the juice has top notes of fig leaf and orange peel, with heart notes of jasmine, violet and freshwater in the middle and powdery musk and tobacco in the base.

The fragrance is not marketed to a specific gender. It’s available for pre-order on aircompany.com for $220 for 50 milliliters, and the company plans to ship in early 2022.

Air Company is what Mr. Constantine calls “source independent,” meaning it gets its CO2 from multiple suppliers, as well as from direct air capture. One of those partners is an industrial alcohol plant in New York, which captures the carbon dioxide (which would otherwise be released into the atmosphere) from its fermentation processes. That CO2 is cooled, pressurized, liquefied and packaged in tanks before being delivered to one of Air Company’s Air Innovation facilities in Brooklyn.

As enjoyable as environmentally sustainable beverages and perfumes may be, you might suggest that they may not be the most beneficial uses for this technological innovation. However, Air Company has bigger ambitions.

“The opportunities to harness carbon emissions are as big and broad as we want them to be,” said Mr Constantine, adding that the company is working with industry partners to focus its technology on more global ambitions for a much greater impact.

“We understand that our impact on the climate is still somewhat minimal, but if we applied our technology to all applicable industries, we would wipe out global CO2 emissions by just over 10 percent for a single technology,” the said. Mr Constantine.