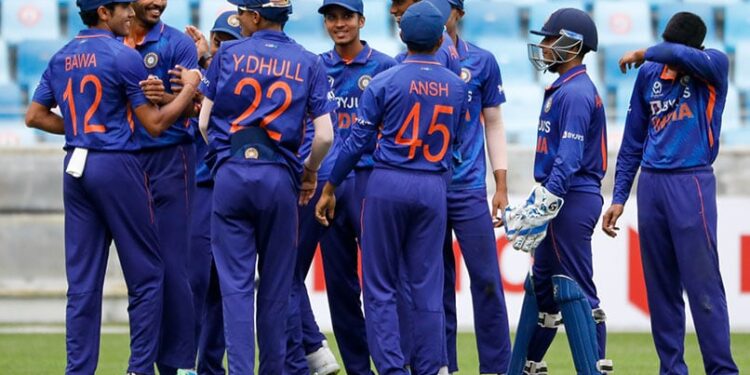 It ended up being a walk in the park for the Indian U-19 side as they defeated Sri Lanka by 9 wickets in the final to win the Asian Cricket Council Under-19 Asia Cup title in Dubai on Friday. The game was interrupted by rain and Sri Lanka came to a paltry 108/9 in 38 overs. India’s adjusted target after the implementation of the DLS method was 102 runs, which they achieved without difficulty. Opener Angkrish Raghuvanshi (56*) scored an unbeaten half-century in what was an easy chase for the Indians. Shaik Rasheed remained undefeated at 31. Spinners Vicky Ostwal (3/11) and Kaushal Tambe (2/23) were the bowlers’ pick for the Indians as they decimated the Lankans.

Previously, India produced a dominant bowling performance to limit Sri Lanka to 106 for nine in the rain-stricken U-19 Asia Cup final here on Friday. Sri Lanka chose to bat, although the early morning showers made conditions ideal for bowling first. Indian tempo duo Rajvardhan Hangargekar and Ravi Kumar let the ball do the talking, although the former was a bit unlucky not to get a wicket.

Left arm pacer Ravi took the first wicket of the match by removing Chamindu Wickramasinghe in the fourth over. The left-handed opener went for a big hoick over the middle of the wicket, but ended wrong in the hands of Raj Bawa at the third man.

Wickramasinghe’s opening partner Shevon Daniel tried to draw Bawa towards him, but the ball got big for him and took a narrow lead over wicketkeeper Aaradhya Yadav to leave Sri Lanka at 15 for two in the 11th over.

India, which has won a record seven Asian Cup titles, seemed like a much better team. Hangargekar was the most impressive pacer in the first 10 overs, generating a good pace that rushed the batters and also took movement off the field.

Sri Lanka’s batters looked completely at sea against the Indian bowlers, be it fast bowlers or the spin pairing of Kaushal Tambe and Vicky Ostwal. Both off-spinner Tambe and left-arm spinner Ostwal got the odd ball to spin sharply.

Ostwal got two in one to leave Sri Lanka in heavy weather at 57 for seven. Southpaw Dunit Wellagle tried to break the buoys with a slog sweep, but ended up getting caught in the deep end.

With India on track to beat Sri Lanka by a total of under 100, heavy rain slammed the Dubai International Cricket Stadium with the Islanders at 74 for seven in 33 overs.

After a long delay, the game resumed and was revised to 38 overs per side.

In the five overs Sri Lanka had, they scored 32 runs for the loss of two wickets.

Hangargekar got a well deserved wicket on the last ball of the innings with Antriksh Raghuvasnshi taking a dive at the square leg boundary to sack Matheesha Pathirana.