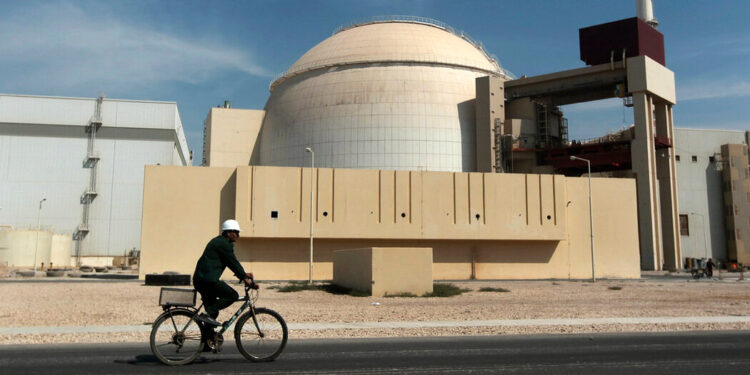 WASHINGTON — The United States and its European allies are poised to restore the deal that curtailed Iran’s nuclear program, Biden administration officials said Monday, but warned it is now up to the new government in Tehran to decide whether, after months of negotiations, it is willing to dismantle much of its nuclear production equipment in exchange for sanctions relief.

A senior State Department official told reporters in Washington that negotiators were ready to accept the broad outline of an agreement after talks in Vienna last week. It would essentially return to the 2015 deal that President Donald J. Trump rejected four years ago, over the objections of many of his top advisers. Ultimately, that freed Iran to resume its nuclear production, in some cases by enriching its nuclear fuel to levels much closer to what is needed to make nuclear weapons.

Government officials warned that it was not clear whether a final deal would be reached, and in Iran that decision will no doubt go to the supreme leader, Ayatollah Ali Khamenei. But the State Department official said “we can see a path to a deal if those decisions are made and if they are made quickly.”

“Now is the time for Iran to decide whether it is willing to make those decisions,” the official said. A second senior government official also said the talks had reached the decision-making stage. Both officials spoke on condition of anonymity due to the sensitivity of the negotiations.

For President Biden, restoring the deal — and with it restrictions on Iran’s manufacturing capacity — would deliver on a major campaign promise and seal a rift Mr Trump had created with Britain, France, Germany and the European Union, which, along with the original agreement participated in the agreement. with Russia and China. But it also carries significant political risks.

No Republican voted for the deal in 2015, and its reinstatement would almost certainly become a campaign issue in the midterm elections. Like the original deal, the new one would not limit Iran’s missile development, the senior official said. Nor would it stop Tehran’s support for terrorist groups or its proxy forces, which have caused unrest in the Middle East, as some Democrats and nearly all Republicans have demanded.

Despite those shortcomings, Biden is willing to return to the 2015 agreement and “make the political decisions necessary to achieve that goal,” the senior State Department official said.

And while US officials didn’t provide details, a clean restore of the old accord would mean that all of Iran’s restrictions on Iran’s production of nuclear materials would still expire by 2030. Last year, Secretary of State Antony J. Blinken vowed that after the restoration of the old accord, the United States would seek one that was “longer and stronger.” But Iranian officials rejected that idea.

The State Department official said negotiations to reinstate the 2015 agreement were “in their final stages” and that “all parties” should commit to return to full compliance. In fact, the United States first violated the original agreement when it lifted and reimposed sanctions on Iran. Mr Trump then added hundreds of additional sanctions, and it’s unclear how the ongoing negotiations will handle them.

In Iran, Ali Akbar Salehi, the former head of the country’s Atomic Energy Organization and a key player in the original negotiations, told an energy conference that “it looks like the nuclear negotiations will achieve the end result we have in mind,” according to Iranian news reports.

After nearly two years of trying to persuade European leaders to lift US sanctions, Iran began to violate the agreement, bar inspectors from key facilities and ramp up its nuclear enrichment.

While it hasn’t accumulated the same amount of enriched uranium as it did before the 2015 deal, it has purged some of its new stock to 60 percent — closer to the 90 percent enrichment used to produce nuclear weapons. Previously, Iran had limited its enrichment to 20 percent.

Iran had opposed eliminating that 60 percent enriched fuel. It’s unclear how it would be removed, or if it would simply be moved to another country, perhaps Russia, which took Iran’s previous stockpile.

When Mr Trump left the original deal in 2018 – which he called “the worst deal ever” – he promised to force Tehran into new negotiations, saying he would get better terms and also the country’s support for the Syrian regime, the financing terrorist groups and their missile tests. But he never got them back to the negotiating table.

Instead, Iran doubled its nuclear and military activities in the region and evaded sanctions by smuggling oil to key buyers — including China — to prop up its economy while waiting for the Trump administration to leave office.

The new government of President Ebrahim Raisi was disdainful of its predecessors, claiming they had failed to lift sanctions even after Iran shipped 97 percent of its nuclear fuel out of the country. And for months it left American negotiators — whom it refused to meet directly — dangling, unsure whether the new leadership would even try to reinstate the old arrangement. Over time, however, economic pressures on Iran increased.

The 2015 agreement. Iran and a group of six countries led by the US reached a historic agreement in 2015 to significantly limit Tehran’s nuclear capacity for more than a decade in exchange for the lifting of sanctions. The agreement was President Barack Obama’s landmark foreign policy achievement.

A way back to an agreement. President Biden vowed to get the US back into the deal, and talks in Vienna created a roadmap for that effort, though challenges have remained: Iran wants the US to lift sanctions first, while the US wants Iran to return to compliance first.

What happens now. Both sides have toned down their demands, but US and Iranian officials have admitted key issues remain to be addressed. While the push to renew the 2015 treaty seems strong, neither side wants to seem too eager to come to a deal.

Mr Biden’s greatest political vulnerability right now may be buying an eight-year reprieve at best in restoring the old settlement.

“You stop the advance of the program; you buy time to address an issue that is being delayed,” said Dennis B. Ross, a longtime Middle East negotiator who oversaw Iran policy at the White House during the Obama administration. “It’s not going away — it’s being delayed.”

But, Mr Ross said, the deal will help prevent a nuclear arms race in the region.

An important point is how Israel will respond. It has continued its campaign of sabotage against Iranian facilities, blowing up some and, at the end of the Trump administration, killing the scientist who led what US and Israeli intelligence believe was Iran’s bomb design project. But no intelligence agency has provided public evidence that the project has resumed in any significant way since it was shelved in 2003.

On Monday, ardent critics of the 2015 deal — and by extension, its return to it — vowed to topple it when a Republican president returns to the White House.

“Any nuclear deal will allow Iran to patiently pursue nuclear weapons as key restrictions expire and tens of billions of dollars flow into the regime’s coffers to fund its destructive activities,” said Mark Dubowitz, the Foundation’s chief executive. for Defense. of Democracies, a Washington-based think tank that has worked with various governments on Iran policy.

“If power shifts in Washington, Republicans will re-impose all sanctions and take America out of what they see as a fatal flawed deal,” he said.