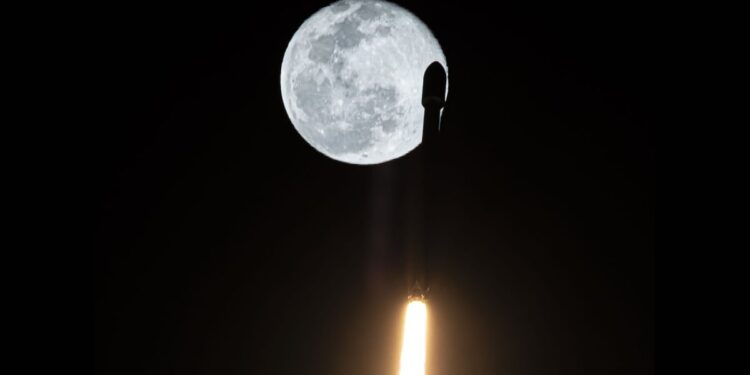 Elon Musk-founded SpaceX has successfully launched 49 more Starlink satellites aboard a Falcon 9 rocket to bring the total number to more than 2,000. The Falcon 9 rocket lifted off from the Kennedy Space Center in Florida, US, on January 19. About nine minutes later, the rocket’s first stage returned to Earth for an accurate landing on a SpaceX drone ship dubbed “A Shortfall of Gravitas.” ‘, which was stationed in the Atlantic Ocean off the coast of Florida.

Musk has billed the Starlink project, which is operated by SpaceX, as a way to deliver low-latency broadband internet services around the world via hundreds of small satellites. The project focuses in particular on remote areas that are not fully covered by the terrestrial internet infrastructure. After the recent launch, Musk tweeted a beautiful image of the Falcon 9 rocket against a rising moon. Musk also plans to embark on a lunar mission as part of NASA’s plan to return humans to the moon after nearly 30 years. “Back to the moon soon,” the SpaceX CEO replied on his own tweet.

SpaceX, meanwhile, shared a great video of the launch. It showed the Falcon soaring above a huge cloud of smoke in the night sky.

In another video, it showed the first stage booster returning to Earth after separating from the rocket and landing on the SpaceX drone ship. SpaceX uses the boosters from the first stage as a reusable machine and thus returns it to Earth. This saves the company a lot of money and also lowers the cost of successive launches.

In case you missed the Starlink mission launch, SpaceX has shared a nearly two-hour video of the full launch sequence.

More Starlink launches are expected in the coming weeks and months. The US Federal Communications Commission has authorized SpaceX to launch up to 12,000 mini satellites.