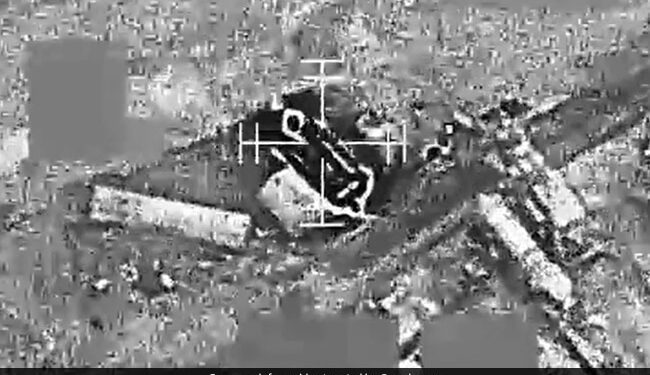 Yemeni rebels fired missiles at the United Arab Emirates and Saudi Arabia, with coalition forces retaliating by blowing up the insurgents’ launch pad as a sharp escalation in hostilities entered a second week on Monday.

Witnesses saw bright flashes over the Emirati capital Abu Dhabi in the early hours of Monday morning, when two ballistic missiles were intercepted and scattered debris.

No one was injured in the attack, a week after Iran-backed Huthi rebels killed three people in a drone and missile strike on the city, triggering a salvo of deadly airstrikes on Yemen.

Separately, missiles were fired at Saudi Arabia in the southern regions bordering Yemen, wounding two people in Jazan, and another missile intercepted over Dhahran al-Janub.

The UAE said an F16 fighter jet destroyed a Huthi rocket launcher at Al-Jawf in northern Yemen at 04:10 (0110 GMT) “immediately after it launched two ballistic missiles at Abu Dhabi”.

MOD Joint Operations Command announces that at 04:10 in Yemen, an F-16 destroyed a ballistic missile launcher in Al Jawf, immediately after it launched two ballistic missiles in Abu Dhabi. They were successfully intercepted by our air defense systems. Video attached. pic.twitter.com/laFEq3qqLm

It released a black-and-white video of the attack, which showed an explosion followed by a large fire that rose plumes of smoke.

The UAE, which is part of the Saudi Arabia-led coalition fighting the Huthis, is “ready to face any threat” and “took all necessary measures to protect the state from all attacks,” the ministry said. Defence.

The seven-year conflict, which, according to the United Nations, has left more than 150,000 dead and millions displaced, entered a dangerous new phase last week.

Coalition air strikes on the Yemeni capital Sanaa and the Red Sea port city of Hodeida have killed at least 17 and have shut down the struggling country’s internet.

An attack on a prison also left at least 70 dead and hundreds injured, although the coalition denied responsibility.

After Monday’s attack, the rebels threatened to step up their targets in the UAE and reiterated their warning to foreign companies to leave the oil, business, transport and tourism hub.

“We are ready to expand the operation into the next phase and face escalation with escalation,” military rebel spokesman Yahya Saree said in a televised statement.

He said the Huthis had been targeted at Abu Dhabi’s Al Dhafra airbase – which houses the Emirates, US and French forces – as well as at “vital and important” sites in the Dubai area. The UAE has not reported an attack on Dubai.

While the rebels have regularly attacked Saudi Arabia, the UAE is a new front in a conflict that also threatens the busy shipping route of the Red Sea.

Earlier this month, after being driven back by UAE-trained troops in a key province in Yemen, the Huthis hijacked a UAE-flagged ship in the Red Sea, saying it had weapons on board.

But last week’s attack in Abu Dhabi – the first deadly attack on UAE soil recognized by the Emirates and claimed by the Huthis – was a shock to the UAE, mostly an oasis of calm in the unstable region.

Abu Dhabi is located about 1,500 kilometers (930 miles) east of Sanaa, the rebel-controlled capital of Yemen.

The reprisals were swift and severe. An airstrike on Sanaa killed 14 people and an attack on Hodeida killed at least three children, leaving the country in a power outage.

The coalition denied carrying out the attack on a prison in the northern city of Saada, home of the rebels, that killed at least 70 people and injured more than 100, overwhelming hospitals.

“This is the latest in a long series of unwarranted airstrikes carried out by the Saudi Arabia-led coalition in places such as schools, hospitals, markets, wedding parties and prisons,” said Ahmed Mahat, head of the MSF mission. MSF). .

Yemen’s civil war began in 2014 when the Huthis took Sanaa, prompting Saudi Arabia-led forces to intervene the following year to support the government.

The conflict has brought millions to the brink of starvation, according to the UN, calling it the world’s worst humanitarian catastrophe.