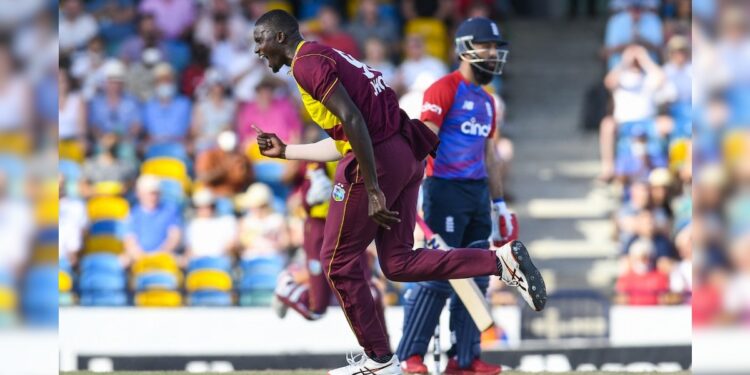 Jason Holder did most of the damage as England’s final batting collapse paved the way for the West Indies’ nine-wicket win in Saturday’s first T20I at Bridgetown. The towering paceman Holder struck twice with consecutive deliveries to his Kensington Oval home ground on a best return of four for seven as England were sacked for just 103 after their Ashes woes. The West Indies then fired to a 104 goal with 17 balls left, opener Brandon King finishing at 52 and not out as the hosts went 1-0 in this five-game streak.

It was an encouraging result for the West Indies, fresh off a 2-1 one-day international series loss at home to Ireland, and now without veteran opener Chris Gayle after a T20 World Cup where they had just one of their five games.

“When it comes to Kensington Oval and Jason Holder, he goes the extra mile,” West Indian captain Kieron Pollard said at the awards ceremony. “He was phenomenal for us.

“We supported it in the field and the guys really put on a show today.”

The West Indies faced a lot of criticism after the series in Ireland, but Pollard added: “Hard times don’t last, tough people do… We stick together in the dressing room.”

England will have little time to reflect on their defeat ahead of Sunday’s second game, with captain Eoin Morgan admitting: “We didn’t seem to adapt well enough. We have to come back tomorrow with a new game plan as conditions likely to change.” be similar.

“In an effort to get the mindset around risk and reward, we found a challenge today.”

Despite Holder being aided by an inconsistent bounce and being a different format, Saturday’s slump was all too reminiscent of the batting collapse that devastated England’s recent 4-0 Ashes loss in Australia .

Holder saw England knocked out in 19.4 overs when he took out Saqib Mahmood and Adil Rashid in consecutive deliveries.

England surpassed their record-low T20 tally of 80, mainly thanks to an eighth wicket score of 36 between Chris Jordan (28) and Rashid (22).

England were without T20 regulars Jos Buttler and Ben Stokes after their Ashes efforts as they fielded a much changed team.

Sam Billings was one of only five survivors of the XI that lost to New Zealand in the T20 World Cup semi-finals in November, making the long journey from Australia to Barbados just days after his testing debut.

As happened in that match, the English bowlers were once again let down by their batsmen, with King hitting four fours and a six in his 49-ball innings under the spotlight.