While other hot spots are cooking, US shows foreign policy focus is on Asia 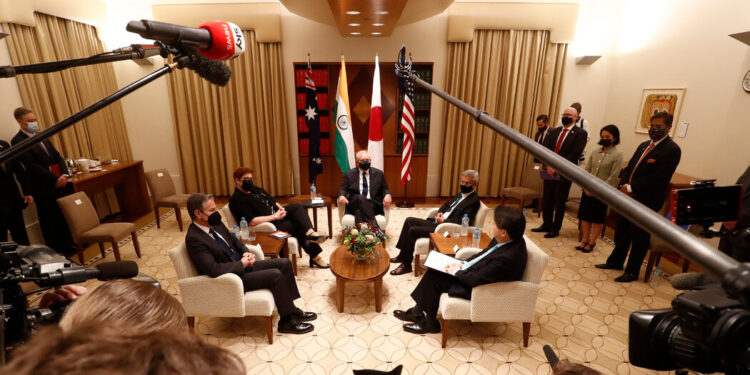 MELBOURNE, Australia — As Europe braced for the possibility of its biggest ground war in decades, US Secretary of State Antony J. Blinken took a 27-hour flight in the opposite direction this week.

On Friday, Mr Blinken met the foreign ministers of Australia, Japan and India at a summit in Melbourne of the four-nation coalition called the Quad. His message was clear: Despite crises in Ukraine and elsewhere in the world, the United States is committed to strengthening its presence in Asia and presenting a different vision of the future than China’s.

Australia is just the first of three stops for Mr Blinken, who will also meet foreign officials in Fiji and Hawaii. The week-long journey to the farthest reaches of Asia and the Pacific shows the intensity with which the Biden administration wants to signal that the vast region is the main focus of its foreign policy.

At the end of January, Mr Blinken had to do shuttle diplomacy in Kiev and other European cities to deal with Russian aggression against Ukraine. Since then, President Vladimir V. Putin has continued to rally troops along Russia’s border with Ukraine for what could be a deadly follow-up to his forceful 2014 annexation of the Crimean peninsula and invasion of eastern Ukraine.

While Mr Blinken and some of his foreign colleagues in Melbourne said they were discussing Russia and Ukraine, that was not the focus of their talks. The Quad, which has gained momentum in recent years after its inception in 2007, is an important part of President Biden’s vision to counter China, which has a powerful economic presence in every corner of the globe and a growing military footprint. in Asia and parts of the Indian Ocean.

Mr Biden has said he plans to strengthen the United States’ traditional alliances and partnerships and build new ones. That is in stark contrast to the Trump administration’s approach, which in its “America First” zeal has sparked tensions with partner countries over issues such as trade and defense financing.

Quad country leaders have watched China’s actions with increasing concern in recent years as Xi Jinping, the leader of the ruling Communist Party, has become more aggressive in his foreign policy.

China has continued to assert its territorial claims to islands in the East China Sea known as the Diaoyu in China and the Senkaku in Japan, which control the area. Chinese forces have clashed with the Indian army along the border of the two nations in the Himalayas. And Beijing has been involved in what some Western officials call “operations of influence” in Australia, including building ties with politicians in the country.

At the same time, all of these countries, as well as the United States, have deep economic ties to China, posing a central dilemma in their relations with the Asian superpower.

During the final leg of the 27-hour flight to Melbourne, after a refueling stop in Pago Pago, American Samoa, Mr. Shining to reporters that he wanted to highlight the Biden administration’s work with the Quad because the group was “very representative of what we’re doing in different ways around the world, building, invigorating and invigorating different coalitions of countries that focus on sometimes overlapping issues.”

That’s a common refrain from officials in the Biden administration. Unlike their predecessors in the Trump administration, they argue that America’s strength comes from its alliances and partnerships, and that this approach is more important than ever because of China’s enormous economic influence.

Mr Blinken’s journey “underlines how important — and how challenging — it is for Washington to keep focus on the Indo-Pacific,” said Charles Edel, Australia’s chairman at the Center for Strategic and International Studies and a former civil servant in policy planning at the State Department.

Formed largely in response to China’s increasing use of military and economic coercion, the Quad aims to prove that democracies can deliver needed public goods across the region. There have been some great achievements this year – particularly around vaccine distribution – but now the work and success of the Quad depends on moving from the conception stage to coordination and delivery,” he added.

Australia, which the United States sees as a model for how smaller countries can cope with a more aggressive China, has become particularly important to US officials as a cornerstone of the coalition and as a regional partner for defense and intelligence.

Unlike European countries, Australia’s ties to the United States grew stronger during the Trump administration and continued in the Biden administration. Last September, Biden announced a new security pact with Australia and Britain called Aukus, declaring that the United States would help Australia build nuclear-powered submarines — a move that infuriated France, which had a lucrative deal with Australia for less advanced submarines.

Chinese officials at the time said the trilateral pact was “extremely irresponsible” and “seriously undermines regional peace and intensifies the arms race”.

On Wednesday, the Communist Party newspaper Global Times made a similar comment by criticizing the ministers’ meeting in Melbourne. “The tone of the four foreign ministers’ meeting scheduled for Friday in Australia is still based on ideological differences and a Cold War mentality,” reads an article.

Marise Payne, Australia’s foreign minister, drew a sharp line Friday morning between the United States’ influence in the region and that of China.

She said at the beginning of a meeting with Mr Blinken that “more than one authoritarian regime presents itself as a challenge in the current global climate – the DPRK, including China.” Ms. Payne used the formal name for North Korea, an ally of China that has conducted an alarming number of missile tests in recent weeks.

“We strongly support US leadership on those challenges,” she added.

The leaders had already said at a virtual summit in March that they would work together to deliver Covid-19 vaccines, and in September they said the goal was to donate 1.2 billion doses of vaccines worldwide, in addition to their pledges to a World Health Organization vaccine program. At the time, they said they had delivered nearly 79 million doses in the Asia-Pacific region.

“I think the most important thing is to maintain a sense of dynamism about those topics,” said Susannah Patton, a research fellow and project director in the Power and Diplomacy Program at the Lowy Institute in Sydney, Australia.

Ms. Patton said Australia saw the Quad as further integrating the United States into a strategic role in the region and committed to continuing what President Barack Obama called a “pivot to Asia” away from the long-running and costly wars of the Middle East and Central Asia.

However, she said it was important for Washington to come up with a comprehensive plan for economic engagement in the Asia-Pacific region. Obama had intended the proposed 12-nation trade pact called the Trans-Pacific Partnership to do just that, but President Donald J. Trump blocked any American role in the agreement. And within the Democratic Party, Senators Bernie Sanders and Elizabeth Warren and other progressive politicians had denounced the pact, saying it would harm American workers.

Mr. Obama and Mr. Biden, when he was vice president, argued that the pact would help raise environmental and labor standards in Asia and give member states alternative trading partners to China, which was not a founding member.

Last September, when the United States was absent from the trade deal, China applied to join.