Why don’t all lions climb trees? 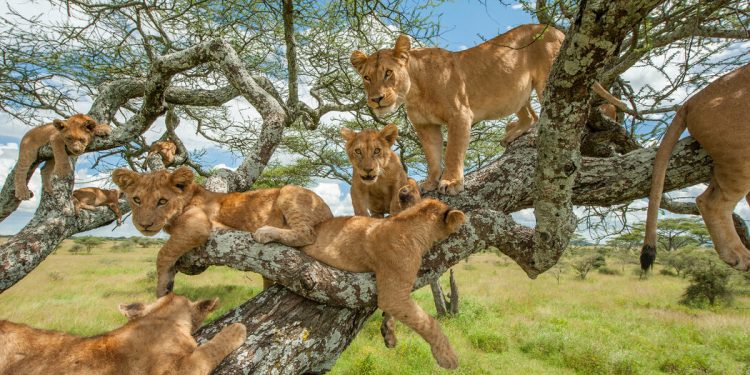 Visit Queen Elizabeth National Park in Uganda or Lake Manyara National Park in Tanzania and you will see something unusual: lions climbing trees and spending much of their lives resting on branches high above the ground. Elsewhere, lions rarely climb and look rather silly trying to do so.

“They can get there pretty well,” said Craig Packer, who oversaw the Serengeti Lion Project for some 35 years. But he added that “they go up there and they say, ‘Whoa, how do I get down?'”

Other large predatory cats climb trees all the time. “Anatomically, leopards are just better built for climbing,” said Luke Hunter, executive director of the Wildlife Conservation Society’s big cat program in New York City. “They are lighter and a leopard’s shoulder blade, their shoulder blades, are proportionally larger, flatter and more concave than a lion’s.

“Lions, on the other hand, are built with tremendously powerful forequarters and a very, very stiff back,” he continued. “That’s to wrestle heavyweight prey, like a buffalo, to the ground.” Their sheer strength, he added, “comes at the cost of the agility and vertical strength a leopard has to whip up a tree with an impala.”

Climbing a tree, said Dr. Packer, can even be dangerous, especially for heavier male lions. “If a lion comes down, he can dislocate a limb with all that weight.”

Most lions also have little need to climb trees. They are social and live in groups and can generally defend their meals from other predators. Solitary leopards must keep their prey in a safe place and, according to one study, would lose more than a third of their prey to hyenas if they were unable to hoist their captured prey up a tree.

So why do lions climb trees in some areas, if they’re not built to climb and rarely have to? It has less to do with natural abilities and more to do with learned behaviors and unique local conditions.

In Zimbabwe, there is very little data on lions climbing trees, says Moreangels Mbizah, a conservation biologist who works with lions in the Kavango-Zambezi Transfrontier Conservation Area. “The only reason they would want to climb is if there’s something on the ground that they’re avoiding,” she said.

After a period of particularly heavy rainfall in 1963, for example, a plague of Stomoxys biting flies drove lions up trees and through warthog dens everywhere to escape the insects that caused open wounds and deadly infections. This learned habit, George B. Schaller speculated in “The Serengeti Lion,” a seminal study of lion behavior, may have been the precursor to the culture of tree climbing among the lions of Lake Manyara.

Lions can also climb trees to escape the heat and scavenge the landscape for prey, said Joshua Mabonga, carnivore research coordinator with the Wildlife Conservation Society’s Uganda Program. But in Uganda’s Queen Elizabeth National Park, there may be another reason: there, lions live in smaller groups than those in many other lion habitats, sharing the park with large herds of buffalo and elephants. When faced with a stampede of buffalo that could endanger them, lions escape into the branches. “The safest place for lions is in the trees,” said Mr. mabonga.

Or, as Dr. Packer put it: “Lions climb trees to escape pests, whether they are the size of an elephant or as small as a stable fly.”

In order for lions to escape like this, they need the right kind of tree. Lions often climb African sycamore figs or umbrella acacia thorn trees, which have horizontal branches not too far above the ground.

“It makes it really easy for lions to climb and get up,” said Dr. Hunter.

Where lions have gotten a taste of the experience and there are conditions that allow them to climb, they have moved on to tree climbing with the leopard-like zeal of converts. At Queen Elizabeth National Park, Dr. Hunter: “You get whole families – adults, young people, everyone – up trees. Generation after generation, it’s really become a habit to climb the trees. It just becomes entrenched as a culture because it’s fun.”